Who's Afraid of a Head Scarf?

The current political crisis in Turkey, couched by Kemalist circles as a conflict between Islam and secularism, goes far beyond such simplistic formulation. 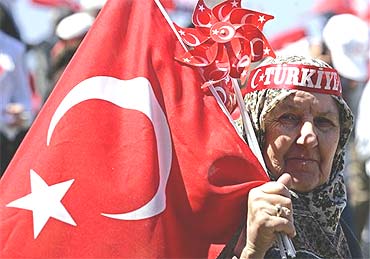 The current political crisis in Turkey, couched by Kemalist circles as a conflict between Islam and secularism, goes far beyond such simplistic formulation. It's as much a tussle between the country's democratic imperatives and the autocratic impulses of the military top brass long used to dictating terms to Turkey's civilian rulers. It's, above all, a struggle between the new social and political forces represented by the AKP, or Adalet ve Kalkınma Partisi, and the entrenched political and economic elite denoted by the epithet "Kemalist."

The issue of secularism versus Islam is, therefore, just one element in the standoff between the ruling AKP and its civilian and military opponents. This was demonstrated in particular by the memorandum on the military website that all but threatened a military coup if Foreign Minister Abdullah Gul were elected to the presidency. The memorandum underscored the symbiotic nature of the relationship between secularism and authoritarianism, as conceived by Kemalists. Consequently, it threw into sharp relief the close relationship between democracy and the free expression of religion, including the wearing of the headscarf by the prospective first lady.

The rise of AKP to power in 2002 sent a clear message to the broader Middle East that Islam and democracy are compatible and that, in fact, a party with Islamic roots could come to accept secular political values while retaining commitment to an ethical code that drew inspiration from Islam. It also signaled that Islamist parties elsewhere, as in Egypt or Algeria, can moderate if the right circumstances prevail and regime repression ceases.

In a surprise turnaround, AKP also became the primary proponent of Turkey's entry into the EU. Its advocacy of Turkish accession to the EU resulted in part from its attempt to consolidate democracy in Turkey by using the Copenhagen criteria to force the military to desist from intervening in politics. That advocacy was also, in part, a response to interests of the new provincial bourgeoisie, beneficiaries of economic liberalization and the financial backbone of AKP.

The emergence of the AKP as a post-Islamist, conservative democratic party out of the womb of an Islamist movement is a sign of the maturity achieved by Turkey's Islamists, thanks largely to their incorporation into what was becoming a relatively open political system. Their transition from Islamism to post-Islamism entailed a shift from emphasizing implementation of sharia law to accepting the secular state while infusing society and polity with moral values based on Islam, what anthropologist Jenny White has termed "Muslimhood." A similar trend is visible in the other major democracy in the Muslim world, Indonesia, where Islamically inclined political formations have had little hesitation in accepting the secular character of the state.

Kemalist elite are entrenched in the military, the bureaucracy, the legal system and the upper echelons of the academia. They regard both democratic consolidation -- entailing the political empowerment of the hitherto economically deprived, politically disempowered and religiously observant population of Anatolia -- and Turkey's eventual entry into the EU as threatening to their economic and political interests.

Kemalists used the Gul candidacy as the ideal opportunity for raising the slogan of "secularism in danger," in an attempt to hide other major contradictions in Turkish society, namely, those between democracy and authoritarianism as well as the new and the entrenched social forces. Derailing the democratic process and returning to the semi-authoritarianism characteristic of the Kemalist state was the only way the elite could retain privileges. Hence the midnight memorandum threatening military intervention if AKP went ahead with Gul's election to the presidency.

The major thrust of the AKP agenda is threefold: democratic consolidation, economic liberalization and Turkish accession to the EU. These goals threaten entrenched elements of the Turkish elite. Democratic consolidation as well as accession to the EU could adversely affect the corporate interests of the military, which has projected itself as the guardian of Kemalist ideology that espouses a centralized state, a conception of Turkish nationalism that does not permit ethnic or cultural differences, and a definition of secularism that makes religion subservient to the state. Not many people outside Turkey realize that the Directorate of Religious Affairs appoints and controls all religious functionaries in the country and vets Friday sermons. DRA is the second largest public employer after the armed forces in Turkey.

Unfettered democracy would upset many of these equations, above all by permanently sending the military back to the barracks and making the general staff subservient to civilian rulers. It is no wonder that the military and its civilian supporters, long presented as the vanguard of modernization, have become lukewarm about Turkey's entry into the EU. They have attempted to derail this process by adopting ultranationalist positions on entry-related issues to embarrass the AKP government.

The Kemalist elite are also wary of economic liberalization and Turkey's integration into the international economy on a free-market basis. State handouts pamper the elite. Beyond a bloated defense budget, state subventions concentrated in Istanbul and Ankara in a largely statist economy shield the elite from international and even domestic competition, a root cause of Turkey's economic malaise for several decades.

With World Bank pressure and the election of AKP, this Gordian knot was cut and the country launched on a healthy economic trajectory reflected in the GDP growth of 8.9 percent in 2004 and 7.4 percent in 2005 with inflation down from about 60 percent in 2000 to 8.2 percent in 2005.

The AKP could usher in needed economic reforms because its base includes the provincial bourgeoisie comprised of entrepreneurs who do not depend on state subvention and are not afraid to compete in the international arena. That the base is more religious and conservative was a bonus for the "Muslim democrats" of the AKP. However, this should not blind anyone to the fact that the AKP has come to represent new economic forces in Turkey, radically changing economic and social balance in the country. Consequently, economic dynamism has shifted from the metropolitan centers, such as Istanbul and Ankara, to the provinces in Anatolia. Cities and towns of the interior, such as Kayseri and Konya, have become powerhouses of the Turkish economy further threatening state-dependent economic actors.

Couching the debate in terms of secularism versus Islam and highlighting the issue that Gul's wife wears a headscarf allows the Kemalist elite to hide real intentions that relate to the preservation of economic and political privileges and only incidentally to safeguarding secularism. The ban on the headscarf in government offices can be traced to Turkish laws prohibiting the use of Islamic dress except for religious functionaries. However, the headscarf has been embroiled in controversy since the 1980s when in the wake of a military coup the attempt was made to ban it in educational institutions to depoliticize the student body.

If the Kemalists really believe that a prospective first lady's headscarf poses mortal danger to the secular state, then they demonstrate a mammoth lack of faith in the secular foundations of the Turkish state. If one headscarf-wearing woman residing in the presidential palace can shake these foundations to the core, then they were never as deep as they were made out to be.

Fortunately, this is not the case. Turkish secularism is healthy and robust --  and the AKP's transformation into a post-Islamist, conservative democratic party, Ã  la the Christian Democrats of Western Europe, is testimony to this fact. The accession of an AKP figure to the presidency will complete the evolution of the AKP into a post-Islamist party. It will also send a message to moderate Islamists in countries such as Egypt and Algeria that there is a constitutional route to power and that their success in taking this route depends as much on their willingness to transform themselves as it does on changing the nature of regimes currently in power in those countries.

Mohammed Ayoob is university distinguished professor of international relations, Michigan State University. He is the author of the forthcoming book Many Faces of Political Islam, being published by the University of Michigan Press. Rights: Â© 2007Yale Center for the Study of Globalization. YaleGlobal Online

The Ghosts Of The Past