If there’s an issue, take it to court, because society has mandated that responsibility to the judiciary—not to Kapil Sibal or Google or Facebook or Twitter. 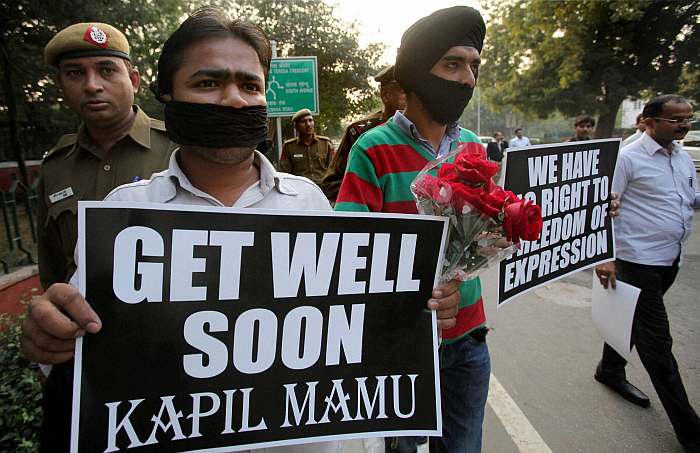 What does one say about the recent controversy where government has been reportedly trying to get firms like Google and Facebook to remove “offensive” content from their sites?

If there is something which is defamatory in nature, deal with it. There are mechanisms in place, wherein content can be removed when content is flagged, and it violates the host's terms and conditions. The key problem here is— who plays judge? Is Kapil Sibal the right person to play judge? No. Is Facebook? No. Is Twitter or Google? No. Who plays judge?

One of my fears is that something as draconian as pre-censorship may actually be used to make the IT Rules look justifiable, like something of a rollback.

If you also take a look at the IT Rules finalized in April, the Indian government transferred the onus of making a judgement to the social networking sites or to Internet Service Providers (ISPs), who are in no position to make a judgement, forcing them to comply with written requests for removal. The way they will look at it is — I need to save my skin, so I will block. If the social networking site doesn’t block, then the government can go to the ISP and get them to block access to the social networking site. We’ve seen this happen earlier this year, and before that in 2006, when for the want of blocking a few blogs, all blog hosts were blocked by ISPs. So who should play judge? It should be the judge. If there’s an issue, take it to court, because society has mandated that responsibility to the judiciary, not to Sibal or Google. Or have a committee with judges, and be transparent about your reasons. So far, it is all opaque.

What is happening now instead is that you’re looking to create a set of guidelines because the legal process is too long and cumbersome— thus you’re circumventing the legal process, and considering putting an army of people out there who will monitor billions of messages— which is impossible and financially unviable for anyone to do. How can you expect all these people to judge what kind of content you and I put online before it goes up? That will kill the immediacy of instant messaging online, and kill meaningful discussions and conversations as well.

The IT Rules provide safe harbour to intermediaries, but they are themselves flawed and vague, and one of my fears is that something as draconian as pre-censorship may actually be used to make the IT Rules look justifiable, like something of a rollback. People will be furious about suggestions to pre-censor the web, but in comparison, perhaps be willing to accept arbitrary and opaque post-censorship, which is what the the IT Rules allow. The IT Rules need to be amended as well.

Also, how can we allow the government to come up with guidelines about what you and I can post on the web? And you expect humans to go through what is a personal message between you and me—that is ridiculous. What about privacy?

The construct of social networks is also to be taken into account— on Twitter, anything is visible to everyone. On Facebook, you can choose to showcase to a your friends or a group. On Google+, you can showcase your content to different circles of people. This space is constantly evolving. What is private and public— the line between that differs from platform to platform, intent to intent. How do you protect privacy? It’s just poorly thought out.

Why just target Twitter, Facebook and Google? The entire web is full of malicious content. What are you going to do about the entire expanse of the Internet? How will you ever stop it? It’s like saying that there is crime on the street, so you will check the intent of each and every individual before he steps out on the street. What are they thinking? You hear abuse on the streets in India all the time, and it’s the same on the web. The government is just using this as a ruse to bring censorship to the web, where it is taking a worst case scenario, and using that to justify all forms of censorship. It is also a slippery slope— it can either make vague guidelines that allow arbitrary censorship, or once they’re put into place, keep adding to them, often without our knowledge, because there is no transparency— at least, they haven’t been transparent so far, using national security as a convenient excuse.

It’s like saying that there is crime on the street, so you will check the intent of each and every individual before he steps out on the street. What are they thinking?

There are laws in place— and I’m not a lawyer —but there are laws for every single one of those concerns that the government might have. Why do you need a new set of guidelines just for social networking sites? Why not just implement the rules that you already have? If there is no precedent for social networking sites…so what? Defamation is defamation, abuse is abuse. Yes, the viral nature of the web is an issue (anonymity is almost dead), but this can’t be an excuse for opening up the web to censorship. And we do have a choice—let adults be responsible for their own conduct, of choosing what to hear, see and say, and be responsible for their kids.

Instead of the government controlling rent-a-cause mobs—they’re trying to curtail expressions on the grounds that they might lead to violence due to political or religious opportunism.

The other concern that I have—and some might not agree with this—is that we seem to have become very thin skinned. There’s a certain sense of irreverence that has been lost in society, because we’re just so touchy about things. A friend of mine recently remarked that the Mahabharata scene from Jaane Bhi Do Yaaron would have been censored if it was done now, because it would have offended certain sections of society today. The Internet is where irreverence is still alive, where someone can start a hashtag which states #kapilsibalisanidiot, and it is a critique of the man. That irreverence is lost to society today because there is so much censorship and even self-censorship in the form of political correctness, and we just don’t seem to accept that there might be a difference of opinion.

Sibal is also trying to address the wrong part of the problem—instead of the government controlling rent-a-cause mobs—they’re trying to curtail expressions on the grounds that they might lead to violence due to political or religious opportunism. Today I’m opposed to Sibal’s point of view—I find it offensive that he plans to censor content online —but I respect his right to have that point of view. Why shouldn’t I have the right to offend someone with my difference of opinion, as long as I’m not breaking any law?

The way I see it, as offensive as it is, the Internet is the final frontier for freedom of expression, and governments are now worried about the mass mobilization of opinion and activity that it allows, which is threatening their now outdated ways of governing thought.

Nikhil Pahwa is the founder and editor of medianama.com, where this article first appeared today as his latest editorial