Reporters from many news organisations have expressed support to senior CNN correspondent Jim Acosta after the White House revoked his press pass "until further notice" because of the journalist's combative exchange with President Donald Trump at his post-midterms press conference. 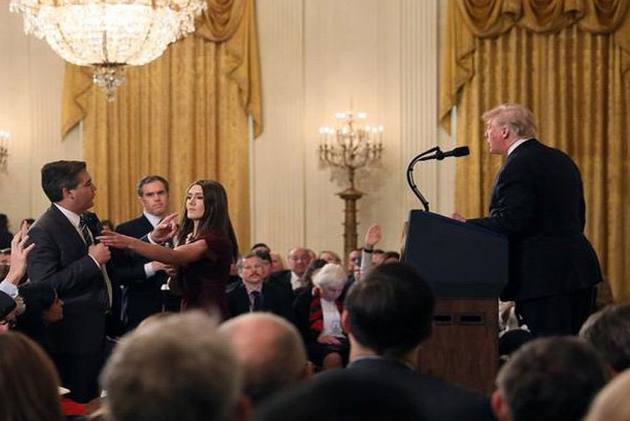 Hours after banning CNN reporter Jim Acosta from the White House, press secretary Sarah Sanders twitted a video to support the US administration decision which allegedly have been doctored claimed an expert.

As per the news reports, one tweet by Sanders appears to have been altered to speed up Acosta’s arm movement to show that he was more aggressive than his approach as claimed by Abba Shapiro, an independent video producer.

Trump administration claimed that Acosta  was aggressive during the media exchange with President Donald Trump at post-midterms press conference.

Sanders tweeted a video, in which it is visible that Acosta asking Trump a question on Wednesday while an intern tries to take his microphone away. The video also shows that the journalist tries to grab the microphone back very aggressively, which the independent expert claimed that has been manupulated as reported by Hindustan Times.

However, the White House, said it stands by its decision banning CNN reporter Jim Acosta.

"We stand by our decision to revoke this individual's hard pass. We will not tolerate the inappropriate behaviour clearly documented in this video," Sanders said, posting a video of the CNN reporter allegedly placing his hand on a young woman.

...over the course of 1.5 hours including several from the reporter in question. The fact that CNN is proud of the way their employee behaved is not only disgusting, it‘s an example of their outrageous disregard for everyone, including young women, who work in this Administration

"The question is: did the reporter make contact or not? The video is clear, he did. We stand by our statement," she said.

President Trump believes in a free press and expects and welcomes tough questions of him and his Administration. We will, however, never tolerate a reporter placing his hands on a young woman just trying to do her job as a White House intern...

We stand by our decision to revoke this individual’s hard pass. We will not tolerate the inappropriate behavior clearly documented in this video. pic.twitter.com/T8X1Ng912y

The news report also pointed out that Shapiro also mentioned that the frames of the video tweeted were manipulated to slow down the action, as reported by CBS News.

Shapiro also pointed out that the tweeted video does not have any audio, which she said would make it easier to alter

Reporters from many news organisations have expressed support to senior CNN correspondent Jim Acosta after the White House revoked his press pass "until further notice" because of the journalist's combative exchange with President Donald Trump at his post-midterms press conference.

Meanwhile, CNN said the revocation of Acosta's pass "was done in retaliation for his challenging questions at today's press conference...This unprecedented decision is a threat to our democracy and the country deserves better".

Acosta was stopped by the Secret Service from entering the White House at about 7 pm.

"I was seated next to Acosta at today's press conference and did not witness him placing his hands on the young intern, as the White House alleges," he tweeted.

I was seated next to âÂÂ¦@AcostaâÂÂ© at today’s press conference and did not witness him “placing his hands” on the young intern, as the White House alleges. He held on to the microphone as she reached for it. The âÂÂ¦@ReutersâÂÂ© pictures below depict what happened accurately. pic.twitter.com/nO68Hf4eQM

Mason, a Reuters correspondent, said Acosta held on to the microphone as the intern reached for it and later posted a few pictures from the press conference to prove his point.

White House Photographers Assn says it "is appalled to learn that the White House spokesperson may have shared a manipulated video of CNN reporter Jim Acosta’s interaction with a White House intern during a news conference. ... Manipulating images is manipulating truth."

The White House Correspondents Association (WHCA) also said such a decision is "unacceptable" and urged the White House that it "immediately reverse its decision".

The "hard pass", which speeds up entry to the White House grounds, was suspended by the Trump administration on Wednesday night, CNN reported.

Acosta is CNN's chief White House correspondent. He was trying to re-enter the White House grounds for a live shot on the show "Anderson Cooper 360", when he was stopped by Secret Service officers.

Right-wing websites and pro-Trump commentators alleged that Acosta mistreated a White House intern who tried to take a microphone away from him during the press conference.

On Thursday, the Radio Television Digital News Association, which represents newsrooms across the country, called the revocation "unconscionable".

Chuck Ross of The Daily Caller, a website that harshly criticizes CNN, stood up for Acosta.

"Plenty to criticise Acosta about," Ross wrote, "but he did not 'place his hands' on the intern. It's ridiculous for anyone to suggest he did."

The Reporters Committee for Freedom of the Press said Sanders' "false description of the events leading up to it is insulting not only to the nation's journalists, but to its people".

The White House Correspondents' Association called the yanking of Acosta's pass "out of line" and "unacceptable".

"We urge the White House to immediately reverse this weak and misguided action," the association added.

Senior journalists represented by the association also spoke up.

Hallie Jackson, of NBC, wrote on Twitter that the press corps "should stand up against this".

Peter Baker, of The New York Times tweeted: "This is something I've never seen since I started covering the White House in 1996."

Baker wrote that he believes Trump called on Acosta at the presser because "he wants the confrontation".

In 2015 and 2016, Trump's campaign refused to give press credentials to reporters from several major news outlets, including The Washington Post and BuzzFeed.