Besides achieving peace with Pakistan, Atal-Ji's dearest wish was to restore normalcy in Jammu and Kashmir. 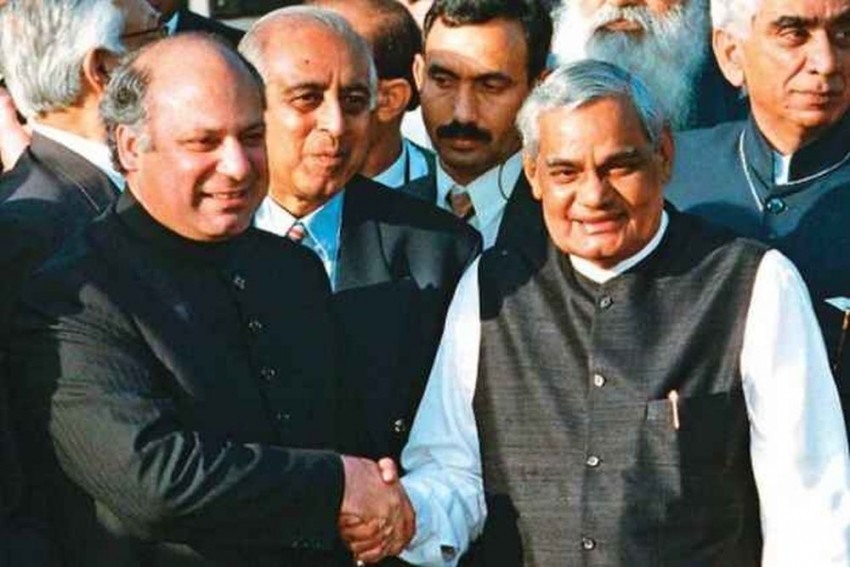 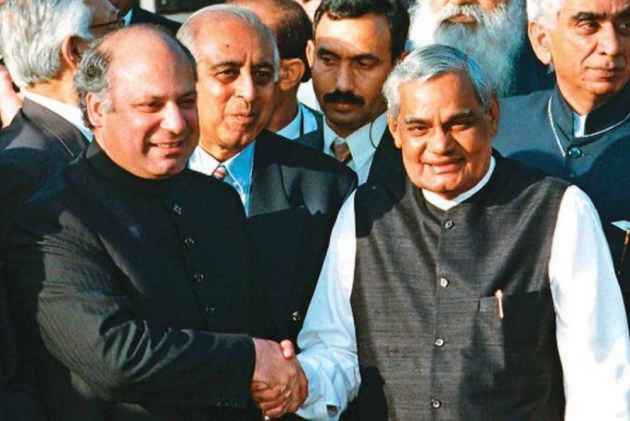 If his popularity helped him win Parliamentary elections 12 times in India, Atal Bihari Vajpayee's oratory--passionate in words and sincere in message--endeared him to people in Pakistan as well.

So much so that after a powerful appeal for peace by Vajpayee in a speech during a historic visit to Lahore in 1999, then Pakistani Prime Minister Nawaz Sharif quipped: "Vajpayee ji ab to aap Pakistan me bhi election jeet sakte hain" (Vajpayee ji now you can win elections in Pakistan also)

Such was the charisma of Atal-ji for whom I had the privilege of working.

I had accompanied Atal-ji on his historic bus trip from Amritsar to Lahore on the first ever direct bus service between India and Pakistan as part of his effort to build peace with Pakistan, a goal that remained close to his heart.

As we all know, he signed the Lahore declaration with Nawaz Sharif. I remember, in his speech from the lawns of Lahore Governor's House, he literally engaged the people of Pakistan in a sort of a dialogue and he made a very passionate appeal for peace which was broadcast live by Pakistan Television.

Besides achieving peace with Pakistan, Atal-ji's dearest wish was to restore normalcy in Jammu and Kashmir.

Once we were on a holiday in Manali immediately after the 1998 government was formed. At a brainstorming session Atal-ji indicated his mind about his priorities and said his topmost priority would be to improve relations with all our neighbours including Pakistan in a peaceful manner through bilateral dialogues and other priority set was if he could resolve the Jammu & Kashmir issue.

He said both the issues were inter-related and then started working in that direction because when he met Sharif at the Colombo SAARC summit they had one on one talks on the sidelines.

He broke the ice and there and I think the dialogue also started there. Then we went on the Lahore Bus peace mission and then the Lahore Declaration followed.

Sharif's comment on Atal-ji's popularity was not only interesting but spoke volumes of his charisma.

The Lahore Bus initiative failed and we had to face Kargil. There again he showed his leadership and encouraged the armed forces. India literally emerged victorious in the Kargil war. And his party returned in a big way and NDA got majority.

During Atal-ji's first visit to the Kashmir Valley he again touched the chord with the people when he declared that "we want peace in the Valley, we want to resolve all your problems in the spirit of "Jamhuriyat, Insaniyat and Kashmiriyat."

His use of expression Kashmiriyat and that the Kashmiri identity would be preserved appealed tremendously to the agitating minds of people in Kashmir.

When he talked of the Kashmiriyat and the spirit of Insaniyat that again was an appeal that "we want to solve all your problems without resorting to force and then of course when he said democracy, that means within the framework of the Indian Constitution.

So all these terms coined as Vajpaee doctrine on Jammu & Kashmir remain relevant even today. And on Wednesday also, Prime Minister Narendra Modi from the ramparts of the Red Fort made an appeal in the spirit of same doctrine of Kashmiriyat, Jamhuriyat and Insaniyat.

That was one dimension of Vajpayee ji-s personality.

Atal-ji used to work till late in the night and after the office work, he would retire to his Race Course Road residence and then go through his programm for the next day, go over the speeches he had to deliver.

He himself would go through that text. Sometimes he would call one of us, suggesting something in his draft speech. He would work till midnight. He used to take his engagements very seriously. If necessary he would stay up beyond midnight also. He used to do his homework. For that he could find time only in the night.

Atal-ji began his day with some kind of physical exercise, sometimes using the treadmill and regular walks on the track.

Because he wanted to be fit as early as possible after the knee transplant surgery, he used to do extensive physiotherapy. Then he would be meet with the Principal Secretary, PS etc.

Atal-ji was very fond of spicy food and sweets, and would order these from special food chains of Lucknow as well as Chandni Chowk.

Besides, Atal-ji was very particular about taking care of his guests and would take personal interest in ensuring that visitors were served food of their choice. He would tell the staff that such and such person should be served such and such dishes!