What If The Satanic Verses Had Not Been Banned?

For one, Ayatollah Khomeini would probably never have seen a televised protest which prompted him to issue that infamous fatwa proscribing a book he had himself never read.... 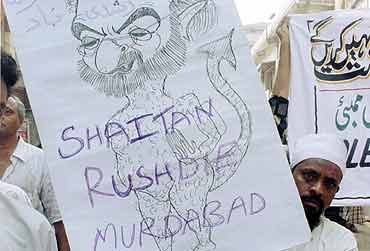 On the 24th of February 1989, barely 10 days after the infamous and shameful fatwa of apostasy delivered against Salman Rushdie by Ayatollah Khomeini, 12 people were killed in police firing in Bombay. The police was apparently forced to open fire when a crowd of around 10,000 Muslims protesting outside the British Consulate began to turn violent.

Almost fifteen years later, when Rushdie returned to his home city, it had been renamed Mumbai, and by January 2004, the very forces that had contributed to the city’s name-change had succeeded in circumscribing the power of the theocrats who had organized the February 1989 demonstration. Instead of exhorting the faithful to die for the cause, Islamic groups now offered to pay a mere lakh of rupees to anyone who succeeded in blackening Rushdie’s face. It appeared that after the riots of 1993, the patent on death threats in Mumbai had been transferred to the Shiv Sena.

What might the political landscape of India look like, had Rajiv Gandhi's government chosen not to proscribe the book in 1988 - the first such ban on the book anywhere in the world - that no one who was a party to the decision had read? For one, Ayatollah Khomeini would probably never have seen a televised protest which prompted him to issue that infamous fatwa proscribing a book he had himself never read.

Two, it is interesting to note that so quick was the government to proscribe that the protests, the possibility of which had been cited as a reason for the ban, happened after the ban. So, certainly, those 12 unfortunate Indians who fell in the police firing would not have died. As would the six or more Pakistanis who had died in earlier riots and the 37 who were gunned down in anti-Rushdie riots in Sivas, Turkey in 1993, four years after the fatwa. The Belgian Muslim leaders Abdullah Al Ahdal and Salim Bahri, who were shot for opposing the ban and Hitoshi Igarashi, the Japanese translator of the book, would be alive today. The Norwegian publisher William Nygaard and the Italian translator of the book, Ettore Capriolo, would not have been seriously wounded.

Apart from these tragic and totally avoidable deaths and destruction, more importantly, in India, an entire community would not have to constantly renegotiate the secular space by having to reiterate their positions on the Rushdie affair. Progressive Muslims like Ali Sardar Jafri, Mushirul Hasan and Abid Raza Bedar could not have been hounded by semi-literate bullies from their own community who had neither read the book nor Islamic scriptures.

The word fatwa would not have entered the mainstream dictionaries, and would not have the cache it developed, with opportunist religious leaders declaring anyone who asked inconvenient questions apostate. Life would have been easier for Javed Akhtar and MF Husain and a variety of other unsung Muslim activists, especially the women who worked so hard to change patriarchal community practices relating to marriage, divorce and inheritance that had been given the veneer of religious edicts. Book banning would not have acquired the status of the flavour-of-the-month, and we would not have to defend execrable literature like Taslima Nasreen’s Lajja in the name of freedom of expression.

Also, one could argue that without the ban, there would have been no fatwa, without that "extreme form of literary criticism" as VS Naipaul referred to it, the book would not have sold a million copies, and might have been shown up for what it was, a bloated bore. Midnight’s Children might not have won the "Booker of Bookers" in 1993.Rushdie may not have had to live an "unnatural life," though one does not doubt he would have found another group to aim cheap shots at, given his penchant for the borderline slanderous attention-seeking gimmicks.

He would most certainly have made outrageous remarks such as his claim that Indian literature in any language other than English was inferior, but the west would have paid less attention. Most certainly, his views on pornography would not have assumed the pornographically disproportionate coverage as they did recently. Though as an ex-fan, I wonder if he may not have still retained some credibility as an interlocutor of the west and the east, so evident in his collection of essays Imaginary Homelands. Who knows, he may not have accepted that unpaid job as defender of US imperialism that he now occupies through his op-ed pieces defending US aggressions on foreign soil.

In the movie Deewar, Amitabh Bachchan justifies his criminal ways to Shashi Kapoor by suggesting that before asking him any questions, he should interrogate those people who had tattooed his father’s shame on his arm. One can see the same defiance in the Hindutvavadis whenever they are demanding a ban on the movie Fire, M F Husain’s paintings, SAHMAT’s re-appropriation of the Ramayana, or whatever else seems to bother their notions of a Hindu culture: "Jao pahle us Satanic Verses se ban hatwaa ke lao, phir hum se sawaal karna …." Only after the markers of appeasement have been removed should one demand any tolerance from the majority. The ban on Rushdie's book has served the Hindu right well as a striking exemplar of minority appeasement, of the utter hollowness of the secularist claims.

One must regretfully concede the point, however defensively. The 1988 shameful capitulation by the Indian government and the subsequent fatwa and the resulting obscenity of violence and trauma remains a ghostly reminder of what then was perhaps just seen as a "smart political move", which in effect closed the circle of the anti-secularist logic that had begun to dominate the Indian polity since 1984, when Rajiv Gandhi played the dangerous game of double-appeasement with Shah Bano and Babri Masjid.

Like Gibreel Farishta, the protagonist of Satanic Verses, the Muslim community only experiences its freedom as it hurtles to the ground after a crash in mid-air. Can a crash-landing be avoided? Could it have been? Allah jaane.

In The Waiting-Room Of History