'What I Said In Court Was False'

With the dramatic press-conference by the key-witness in the Best Bakery case naming BJP MLA Madhu Srivastav and his cousin, Congress Councillor Chandrakant Srivastav, as those responsible for intimidating her, there's a ray of hope for the despairin 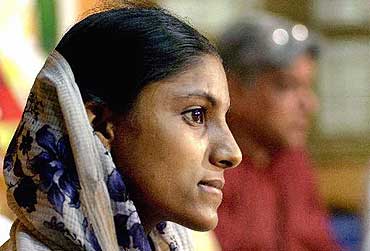 It may well have been a scene from a Hindi film. The key witness to the Best Bakery massacre in Vadodara, one of the most gruesome killings in the city in the post Godhra riots, who had turned hostile in court, and then reportedly gone off to Delhi, and not been traceable since, suddenly surfaced in a press-conference in Mumbai on Monday evening.

When dimunitive 19-year Zaheera Shaikh spoke to the press for the first time after she had turned hostile in court two months ago, she looked guarded and wary, a far cry from the outspoken young woman who had deposed fearlessly before several tribunals and declared that she wouldn't marry until the perpetrators of the Best Bakery massacre were punished.

"What I said in court was false. We were being threatened everyday. I thought we would be killed. And no one came forward to support us. Main bilkul akeli pad gayi thi," ["I was completely alone"] she recounted tersely in the packed press conference. As the main complainant in the case, Zaheera's about-turn was a major factor that had led to the acquittal of all 21 accused in the horrific carnage in which 14 people had been murdered over a period of 12 hours on March 1, 2002. Four of those killed were Zaheera's relatives.

As the first court verdict on the Gujarat riot cases, the ruling has been a blow to the victims of the pogrom who see it as a preview of how the rest of the cases will end. The ruling was delivered by the fast-track session court ten days ago. Zaheera's statement coincides with the NHRC's visit to Vadodara to examine the evidence in the case.

Just a day before, her mother Sehrunissa spoke out, admitting that the family had lied in court "trembling with fear" under threat from the ruling BJP. The family is now demanding a retrial of the case from Mumbai because they don't expect a fair trial in their home state. Of the 73 witnesses examined by the court, as many as 41 had turned hostile including Zaheera's mother, brother and sister.

"What my mother said was right," Zaheera told the media. She said that BJP MLA Madhu Srivastav and his cousin, the Congress councillor, Chandrakant Srivastav threatened to kill her if she deposed in court. "They used to call and threaten me on the family's mobile phone. They used to say, "You will not be able to go to court. We will kill you on the way. There was a lot of pressure from the BJP and Bajrang Dal."

"There were threats all the time, they repeatedly told us that my mother, too, would be killed if I didn’t go back on my statement to the police. I didn’t want any more of my people to die. There was no way I could have told the truth in court."

Predictably, Madhu Srivatsav blames a political conspiracy by some Congress leaders to tarnish his and his party and state's image. His cousin, Chandrakant, the Congress Councillor, echoes him in not knowing who Zaheera is, and claims no contact with her or her family.

Soon after she turned hostile, Zaheera had gone into hiding and has now resurfaced with her family in Mumbai under the protection of the NGO, Citizens for Justice and Peace. "I don’t trust anything, anybody there [in Vadodara], and I am too scared to go there now. Our lives are in danger," Zaheera said.

On the day of her deposition, she explained, she could not cope with the hostility in the courtroom. "People were staring at me. There were no Muslims there, only Hindus. When I was asked to recognise the accused, I said I could not," she said. Zaheera's lawyer Mihir Desai said that the judge did not cross-question her and her lawyer, the state public prosecutor, had not bothered to meet her before she was called to depose in court. The only question he asked her was, "Do you want to recognise any of the accused in court?" "In such a high profile criminal case, it's unthinkable for the lawyer to meet the key witness only in court," Desai said. 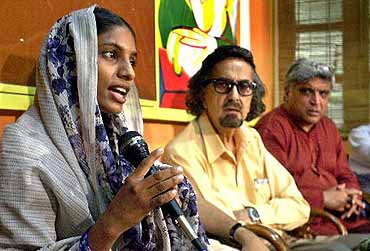 "Madhu Srivastava asked me to lie in court," she said: "The 21 accused are the same ones who had killed all those people in the bakery." Had the police, as alleged by some witnesses, picked up the wrong persons? "No," she said, "they are the ones. If the case comes for retrial, I will identify each one of them."

Zaheera maintained that in the end, it was the sense of isolation that made it difficult for her to fight it out. "If someone from the community had stood by me, I would not have given up. But they all let me down. Even the relief committee demanded Rs 4 lakhs to fight my case. All the lawyers I approached demanded legal fees," Zaheera despaired.

After the family turned hostile, rumours about a trade-off with the BJP flew thick and fast. These were compounded by reports that Madhu Srivastava had accompanied Zaheera to court on the day of her deposition in May and that she had left the court in his car. But Zaheera denied the allegations. "I want to clear my name. People say we took money but that's not true. We were pressured," she said. She said she had gone to court in a rickshaw and saw Madhu Shrivastava outside the courtroom. She admitted that she left the court in his car, but said it was under duress. "My brother told me to get into the car and I did what he said. He was also under pressure," she told reporters.

Zaheera said that she had gone to a relative's home in UP soon after her deposition and learnt about the verdict just a few days ago. She then decided to approach the CJP since she had met its members when they visited Gujarat last year. "I thought they would help me and they agreed," she said.

Activists from the CJP said that it was more important to focus on the fact that Zaheera's testimony had remained consistent for an entire year and changed overnight, that too, after the BJP came back to power in the state. "She has deposed before many tribunals and her stance has been consistent. The sudden change shows that there was pressure," said Teesta Setalvad from the CJP.

"We are here to extend our support and help in the family’s rehabilitation," Alyque Padamsee said. "We cannot keep quiet any longer. What will happen if those who have promised to protect turn persecutors. We have to get more people to voice our dissent against what is happening."

Arguing that the entire edifice of democracy will crumble if justice is not provided, Javed Akhtar said: "It is obvious that there have been no serious attempts at meting out justice to those who suffered in the riots. It is time we stood up to get counted."

The CJP plans to move the supreme court, asking for the case to be transferred and tried afresh. "There have been several precedents especially in matrimonial disputes where the supreme court has allowed cases to be transferred.Retrials in criminal cases are more unusual but we hope for the best," said Desai. For the moment, the family has been shifted to an "undisclosed location" away from media scrutiny. As for the hundreds of victims of the carnage, there's reason to hope that justice may yet come their way.