There was frustration all around as bad light and drizzle allowed just 15 over to be sent down, leaving England at 200-5 and Kumble agonisingly close to his 500th Test victim. 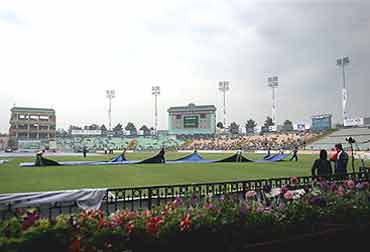 The weather Gods ensured ace leg spinner Anil Kumble was made to wait for another day before he could emgrave his name in the record books as only the fifth bowler ever to take 500 or more Test wickets.

The 35-year-old tweaker had brought himself tantalisingly close to the coveted milestone by picking his 498th scalp on the second morning of another weather-marred day in the second Test against England today.

Kumble's dismissal of overnight batsman Paul Collingwood was the only bright note on an otherwise gloomy day which saw England add 37 runs to their overnight score and finish on 200 for five in 65 overs.

The match, however, held promise of a thrilling contest because one of the unbeaten batsmen at the crease was the charismatic England skipper Andrew Flintoff, who had already hit six fours in his entertaining 45-ball 26.

Giving the captain company was wicketkeeper-batsman Geraint Jones on seven.

Only 15 overs were possible in the day as a combination of bad light and drizzle kept the players off the ground and left the sizeable crowd at the PCA Stadium disappointed.

It helped matters little that the match began half an early to make up for the time lost yesterday which was close to two hours.

Frequent inspections by the umpires -- Darrell Hair and Simon Taufel -- were also rendered an exercise in futility as the conditions could not have warranted any play.

Kumble struck off the second ball of his fifth over, clean bowling first Test centurion Collingwood with a googly that clipped the bails in a spectacular fashion. The morning strike by India's leading wicket-taker put England firmly on the backfoot and threatened to spoil their plans of scoring a competitive first innings total after having elected to bat.

The visitors, overnight 163 for four, started the day confidently with Flintoff deciding to take the attack to the rival camp.

The indomitable all-rounder welcomed debutant Munaf Patel with a straight driven four before hitting another in the paceman's next over.

The stand-in skipper was also unruffled by Kumble, who managed to trouble the batsmen on quite a few occasions, slamming him for two boundaries in one over, including an exquisite straight drive.

But like yesterday, the English batsmen were guilty of losing their concentration just when looking to settle down.

Collingwood was bamboozled by the Kumble delivery that straightened, similar to the one that dismissed Ian Bell yesterday. He made 25 with three fours in 185 minutes and 77 balls.

His association with Flintoff for the fifth wicket was worth 26 runs.

With the clouds refusing to go away, it appears the fate of the match would be in the hands of the weather Gods rather than the teams who were looking to go 1-0 up in the three-Test rubber with a win here.