'We Did Not Deserve The Cup'

'It is too early to collect my thoughts. A lot of hard work has gone into it over the last year. But we did not play well in this tournament and did not deserve to go into the second round.' 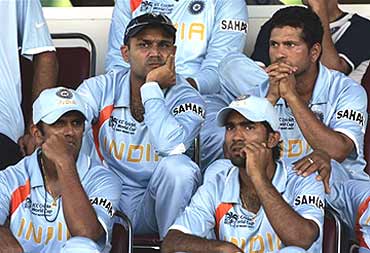 outlookindia.com
-0001-11-30T00:00:00+05:53
Smarting under the humiliating loss against Sri Lanka that has all but put them out of the World Cup, captain Rahul Dravid said the Indian team "has not delivered" on its promises and did not deserve to win the trophy.

"It is too early to collect my thoughts. A lot of hard work has gone into it over the last year. But we did not play well in this tournament and did not deserve to go into the second round," Dravid said after the 69-run defeat at the Queen's Park Oval on Friday.

After restricting Sri Lanka to 254 for six, India were all out for 185 in 43.3 overs. The defeat left them with just one win from three games in Group 'B' and only a miraculous win by Bermuda over Bangladesh tomorrow would see them through to the next stage.

"The target was gettable. I am disappointed with the top order. We had an extra batsman but we lost wickets at regular intervals. We needed one big partnership but we did not get that," the skipper said.

"I don't think it was a wrong decision to field first. There was something in the wicket early on. It was the right decision, we bowled quite well.

"We did not have luck upfront as the ball beat the bats a few times, hit the pads a few times."

Dravid, however, backed his teammates even while being humble enough to accept the responsibility for the team's disastrous performance.

"I am the first one to stand up and say that we should have done better, and it starts with me. I am not trying to put the responsibility on anyone," Dravid said.

"Some of these guys have had success before as well. It's a question of, maybe the guys going back and looking at their performances, how they performed in the important and critical games."

The Karnataka batsman did not expect fans back home to show extreme reaction to the team's below par display.

"I hope the players wouldn't be under any physical danger. I don't expect that to be the case. I am sure people will be disappointed but there is nobody more disappointed than the players themselves," he said.

"It is very emotional moment. People will be disappointed, fair enough. They have invested a lot of hope in this team and we haven't delivered.

"But I just hope that no one is in any physical danger. We have to think about it rationally.

"I guess there is always a lot of emotion that gets involved in all these things."

Dravid also said it was up to the selectors to decide on his future as captain.

"I was appointed captain till the World Cup. So I am not even the captain at this point of time. So it's not my decision to make," he said.

He did not want to comment if the team would get a real shake-up following the World Cup debacle.

"I guess there is a month now and obviously the people who make the decisions will have to sit down and think about it and see what they feel is the best way to take things forward."

Comparing the previous and current World Cups, Dravid said the Caribbean edition allowed little scope for bouncing back from defeats.

"In 2003, we started slowly but had enough games to pull ourselves back. This time we did not have that, that's where we fell I suppose.

"In a tournament like this, you have one bad day and you could in big trouble. And that's what happened to both India and Pakistan."

The tournament format apart, Dravid felt the team also failed to adapt to the conditions in the Caribbean unlike in South Africa four years ago.

"I think we just adapted better to those conditions in the last World Cup than we did here."

Dravid said India has not done as well in one-dayers as in Tests in recent times.

"It just hasn't worked out for us. We, as batsmen, have just no been able to adapt to these wickets."