Waugh Signs Off In Style 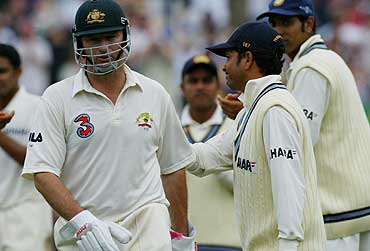 Steve Waugh brought the curtain down on his illustrious career with a tenacious 80 to thwart India's quest for a historic win as the four-match Test series ended in a 1-1 draw at Sydney today.

Needing 433 runs for a victory on an overcast last day, the world champions were in a spot of bother after losing their top four batsmen before the tea break but Waugh shattered Indian hopes with a typical salvage job to take his team to safety.

First innings centurion Simon Katich (77 not out) proved to be the perfect ally for the retiring captain as the duo stitched a vital 142-run partnership to take Australia to 357 for six at close on an exciting last day's play.

The drawn series means Indian will retain the Border-Gavaskar Trophy, a creditable achievement for Saurav Ganguly and his men who posed a serious challenge to Australia's cricketing might in their own backyard and spoil Waugh's farewell party.

Although the Indians managed to remove Matthew Hayden (30), Justin Langer (47), Damien Martyn (40) and Ricky Ponting (47) on a fifth-day track which saw the odd ball lifting sharply, Waugh and Katich dropped anchor to stave off the threat of a rare home series defeat.

The visitors then raised a flicker of hope by dismissing Waugh and Gilchrist in quick succession in the fag end but it came a little too late in the day as Katich and Jason Gillespie fended off the remaining four overs.

It was a disappointing result for the Indians who enjoyed an upper hand right throughout the absorbing series-deciding Test but lacked the sting to tilt the balance in their favour in the last two sessions.

Waugh smashed 80 in 175 nerve-wracking minutes before his mighty heave off Anil Kumble fell in the hands of Sachin Tendulkar at the square-leg boundary.

With little left in the game, Waugh pursued a record 33rd Test hundred but it was not to be.

When 38-year old veteran left the arena for the final time, the entire stadium rose as one and all the Indian team members shook his hands and continued clapping till he entered the dressing room.

Kumble bowled as well as he could and his four wickets in the second innings raised him 12 for the match. But it was not enough to shed the baggage of decades of unsuccessful campaigns abroad.

Little Parthiv Patel, for one brief moment, had the fate of India in his cusp but he failed to stump Ricky Ponting off Murali Kartik in the first over after lunch and Australia seized on the moment gratefully.

Ponting batted for two and half hours more to repel the Indian advance and his 47 was twice its worth at a critical moment of the Australian innings.

Australia had lost two their openers in the first session and Indians were baying for blood when Ponting was joined by Damien Martyn 25 minutes before the lunch break.

India had removed Matthew Hayden (30) and Justin Langer (47) within four overs of each other and the Australians appeared headed for a probable defeat.

Hayden had once again failed to pick up the wrong 'un of Kumble and drove an edge to slips where Rahul Dravid picked up an outstanding one-handed catch stretching to his left.

A little later Kartik had Langer who tried to smash him down the ground but lofted the ball to Virender Sehwag at mid-off.

The openers had put on 75 for the first wicket and the third wicket could have come quickly as well had Patel been up to the task.

India, encouraged by the turn extracted by Kartik, kept the two spinners on attack in tandem for 35 overs in the afternoon.

Ponting and Martyn (40) stayed put for 78 runs for the third wicket before Martyn's slog-sweep lobbed up a catch at short fine leg, giving Kumble his second wicket.

Ponting left in Irfan Pathan's second over when he returned a simple catch to the 19-year old for his third wicket of the match.

Ponting made 47 from 146 minutes and smashed seven fours from 104 balls which, given the context of the game, was the match-saving innings of the day.

Waugh walked in to a rousing reception and his first scoring shot was an on-driven boundary off Kartik. He fought hard against the spinning and bouncing deliveries of a deteriorating fifth day's pitch and was not too perturbed by left-arm seamer Pathan who was brought on to test his reflexes.

Waugh cut Kumble for boundaries, slogged the part-time spin of Sachin Tendulkar and then smote  Sehwag on the onside to complete his half century from 115 balls with 11 fours.

Just before the mandatory overs began, Katich lofted Kumble straight and Ajit Agarkar at mid-off nearly caught the chance on the run.

The Australians began to lay about the bowling with real gusto in the mandatory overs as they set chase for an improbable victory.

Katich used his feet brilliantly to complete his second half century of the match off only 60 balls with six fours and Australia were 302 for 4 with 12 overs still remaining to be bowled.

But the hosts gave up the chase after two tight overs from Kumble and Kartik and the focus shifted to Waugh's last hurrah.