Walking On The Edge

Despite the reverses, the BJP-led government at the Centre looks safe for now 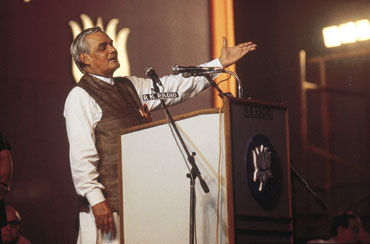 outlookindia.com
-0001-11-30T00:00:00+0553
There’s little doubt that the spectre of losing face in Uttar Pradesh is a body blow to the bjp. Nevertheless, the nda government will survive, at least for now. Much, however, will depend upon the kind of alliances worked out in the state to facilitate government formation. bjp supporters apprehend trouble if the Samajwadi Party (SP), the Congress and other like-minded parties tie up at the regional level as it has the potential for a possible, future national-level anti-nda alliance.

Most analysts agree that without the active participation of the Congress— given the seat-sharing equation in the Lok Sabha—any change of the central government at the present moment is not possible. Added to this is the fact that the bjp’s allies say they are following the nda agenda and as long as that is being adhered to, results of a state election—even of an important one like UP—don’t matter.

While the Congress is trying hard to claim that the UP election is a vote against the government at the Centre, Prime Minister Atal Behari Vajpayee is equally categorical in stating that the state election is not a "referendum on the central government". And yet, during election rallies in UP, both Vajpayee and L.K. Advani raised national issues like terrorism, rather than local concerns. Despite this, the bjp denies that the vote on UP is a vote on the central government. In fact, Vajpayee has laboured hard to emphasise that this was just an assembly election, albeit of an important state.

Numerically, the UP election results do not alter the basic mathematics at the Centre. But the question is whether it throws up straws in the wind, or, for the anti-bjp politicians, ideas on setting up a front of their own, say, by the end of the year. Says a bjp strategist: "You are speculating that a state-level tie-up between the Congress and Mulayam will lead to a coalition at the Centre. Even if that happens, they still don’t have the numbers. Which nda ally will support this combine? Unlike last time, there is no Jayalalitha."

Says a bjp MP, "Do not confuse the Centre with the state." And, as of now, it would appear that no nda ally will pull out just because the bjp failed to retain UP. Says tdp leader in the Rajya Sabha, C. Ramachandraiah: "We did not extend our support to the bjp just because it ruled in a certain state. Our support was to the nda agenda." bjp MPs also point out that the dmk losing Tamil Nadu did not alter bjp-dmk relations. But even though Chandrababu Naidu has claimed that he, like the others, will follow the nda agenda, there is little doubt that with his 29 MPs the Andhra CM is going to further put the squeeze for central concessions, something Vajpayee will be vulnerable to.

In Mumbai, former chief minister Narayan Rane—jubiliant after the recent Shiv Sena-bjp victory in the urban corporation and district council polls—also says the UP polls will not affect the fortunes of the nda government. "It’s absurd to imagine that the bjp’s defeat in a single state would have any impact on the nda government."

However, even Vajpayee cannot deny the symbolic impact of the dwindling of fortunes of his party in the prized Hindi heartland state. The party has lost ground in both UP and Uttaranchal, and now cannot claim the same kind of clout in any Hindi-speaking state. Outside the Hindi belt, Gujarat is the only state where it can claim a hold on. Meanwhile, there is also the other electoral truism: the party that has a hold on UP will have a hold on the Centre. For the bjp, this is particularly telling—the party catapulted to power at the Centre only after it captured UP in 1996.

The allies, however, are talking of a psychological backlash. Says a Shiv Sena MP: "A weakened bjp will lose some legitimacy within the nda. There will be some muscle flexing by the allies." But counters a bjp cabinet minister: "The allies will be watching the PM’s position within his own party. It’s not the bjp’s hold over the voters that is under test. It’s the PM’s hold over his party. And that is secure.’’

Perhaps he is being optimistic. bjp hardliners are already criticising the PM’s soft line on the Ram mandir issue. vhp leader Ashok Singhal squarely blames the bjp’s poor show in UP on its stand on Ayodhya. A pmo spokesperson disagrees. "It was not the Vajpayee line but the party line. Also, for how long can you test the voters’ patience by talking about temple construction and stopping short of actually building it. There is voter fatigue on the temple issue. The crowd responded more to Pakistan-bashing."

What ironically emboldens the bjp smugness is the Congress decision not to stake claim at the Centre until it improves its numbers in the next Lok Sabha elections. And despite V.P. Singh’s best efforts, the bjp knows that there is little chance of a Third Front government at the Centre. Which leaves the nda allies little scope but to support Vajpayee.