Today, I tearfully bid farewell to the great statesman and poet. His poetry will live on as long as the country lives, rather as long as poetry lives in the world. My salute to him, writes Vani Tripathi. 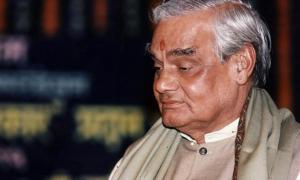 Former PM Atal Bihari Vajpayee died in Delhi. He was 93.
File Photo
August 16, 2018 00:00 IST Vajpayee's Poetry Will Live On As Long As The Country Lives | By Vani Tripathi

I was not into politics as a student, and nobody in my family was in politics either. I came into BJP in 2004 only because of Atal Behari Vajpayee. My father Dr G.C. Tripathi used to run a literary society in Lucknow called ‘Sahityiki’. Atal ji used to come there since his Jan Sangh days, not as a politician but as a poet. He used to come and mesmerize everyone with his poetry. For me, he was always a poet first, and then a politician.

I still remember May 11, 2004, when I got an invite for dinner from the PMO. For me, it was a moment of great ecstasy as I sat across the prime minister on the dinner table. There was the entire Cabinet present there. I started reciting his poetry to him – poems that I knew by heart. Atal ji’s expression was like that of a happy, gleeful baby. I told him that whenever I went to campaign anywhere in the country, I would always end with the lines of my favourite Atal ji’s poem – “Haar nahin manoonga, Raar nai thanoonga, kaal ke kapaal par likhta mitaata hoon, Geet naya gaata hoon.”

Today, I tearfully bid farewell to the great statesman and poet. His poetry will live on as long as the country lives, rather as long as poetry lives in the world. My salute to him.