'Vajpayee Was Being Ruled By Others'

'He was just enjoying his prime ministership... The man had lost his grip. Everyday he was slurring in his speech...he had no control over things-- he didn't know how to manage the RSS, the L.K. Advanis and the Arun Jaitleys...' 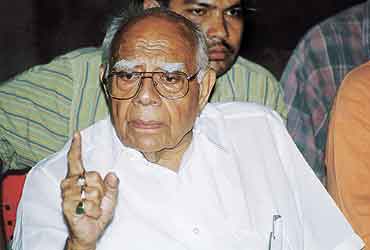 On April 14 then Prime Minister Atal Behari Vajpayee issued an unprecedented public appeal to his "old friend" Ram Jethmalani to reconsider his decision to contest the elections against Vajpayee. Was there a behind-the-scenes deal struck between the two, as some alleged? Former law minister Jethmalani, in a candid interview with Sheela Reddy, flails out at his friend-turned-opponent, admitting that he did redraft a portion of Vajpayee's statement and claims it was the pointed questions he posed about Vajpayee's failing health that frightened the ex-Prime Minister's camp into tendering him a public apology.

During the elections when you decided to contest against Atal Behari Vajpayee, he issued a written statement publicly appealing to you to step down because you were an old friend. Can you tell me what really happened?

Nothing much, really. Some people like Lalji Tandon had attacked me in very foul language. I had asked the first 10 questions on him (Vajpayee) that if you have this kind of a captain who descends into the gutter, how can you prevent me asking you questions like when do you get up, what medicines do you take, what diseases do you suffer from, are you able to walk, what is your attention span, all that. Some friends intervened and said, alright, forget it (suggests a deal in return for an apology from the then Prime Minister for his election agent Tandon's words). They brought some kind of draft (statement to be issued publicly by Vajpayee) of the last paragraph only.

What was that paragraph?

It merely said: "Some statements have been made about Mr Jethmalani which should never have been made." I told the people who brought this: "What the hell are you talking about, what statement is he talking about? He (Vajpayee) should specify that his own party people in the course of his election campaign said these things." I corrected it and gave it to them, saying, "This is the least that he can say if he wants to apologise for Lalji Tandon's outburst."

Basically you specified that Lalji Tandon should be mentioned in the last para?

About the questions themselves that you were asking--how much truth was there in them, about his health?

Every bit of them is true. I asked 60 questions about him, everyday 10 or 11, and all of them were true.

Can you comment more on his health from what you know about him?

I don't want to go into that now. I merely want to explain about that (Vajpayee's) statement--I did correct a portion of the statement which of course was the last paragraph. He (Vajpayee) added (the rest) about Mr Jethmalani is an old friend, why does he want to contest and so on and so forth--that had nothing to do with me.

Was the "old friend" your addition?

No, no. I only corrected that paragraph about the apology, about what Lalji Tandon had said.

Is it true your son was very upset (with you) about this letter affair?

Everybody was upset; all my friends were upset. So what? It's a matter of judgement.

What is your true opinion about Vajpayee?

My opinion is that he was in no sense in a position to rule this country, that he was being ruled by others. He was just enjoying his prime ministership.

Are you saying it was L.K. Advani who ruled?

I don't know. Obviously, he was deputy prime minister, he was in control.

Are you saying Vajpayee was not physically fit to rule?

Of course, yes. The man had lost his grip. Everyday he was slurring in his speech. Forgets facts. The man should have retired, at least it would have been an honourable exit.

When do you think he should have retired?

At least a year ago. Now all these people are saying that Gujarat cost them dear, Venkaiah Naidu is saying Jayalalitha cost us dear. When I saw him (Vajpayee) on the 8th of March, I raised only these three issues: Jayalalitha, Modi and Tehelka. On the 7th, I held a press conference where I said I was sorely disappointed with this government and said that democracy was like a swimming pool where if you don't change the water, it becomes a cesspool. It had become a cesspool and required to be cleaned up.

So what was Vajpayee's response to that?

His response was that he met me (the next day) on the 8th. And I went to him and told him: "You are driving me into the opposition. You are leaving me no option; no respectable person can continue to bear what is happening." So I gave him these three things: to wind up the Tehelka commission, don't have any alliance with Jayalalitha, and third, at least make some penance for Gujarat, at least, allow the Supreme Court to transfer all cases.

And how did Vajpayee respond?

Nothing. Response kya, he doesn't respond to anything. It's just water off a duck's back. Because he had no control over things-- he didn't know how to manage the RSS, the L.K. Advanis and the Arun Jaitleys. My god, that man (Jaitley) has given them wrong legal advice right from the first day. On every important matter, he has given them the wrong advice. First he attacked the Election Commission, saying that it had created a constitutional crisis and something had to be done within six months, which was wrong. Then he appeared for the BJP before the Supreme Court, and the Supreme Court laughed out his arguments. People don't realise what this man is doing. And then he is the product of Narendar Modi. He was elected from Gujarat with Modi's help. When the Supreme Court ultimately transferred one of the cases, it passed severe strictures against the government's legal adviser. Arun Jaitley should have resigned.

Did you say all this to Vajpayee?

I did. But he didn't say anything, just his benign smile. He and Lal Advani have become intellectual twins. I have been his (Vajpayee's) friend, he has never been my friend.

Then why did you agree to drop out of the poll contest with Vajpayee?

I never agreed. On the very first day (after Vajpayee's appeal was published) I said it was my national duty (to contest against Vajpayee).

But you were willing to consider dropping out if he changed the drafting of the statement?

No, no, not at all. I merely agreed that I will not persist in the questioning only.

That you would stop the 10 questions that you were posing everyday?

Stop questions on those lines, not all questions.

Relating to his health, you mean?

Basically to stop attacking him personally?

It's not a question of personal attack. That also is wrong. A politician's health is a matter of national concern.

How serious really were his health problems?

According to me, it is very serious. You saw on 15th August (at Red Fort to deliver the Independence Day speech) he left one shoe in the car?

But that is something any absent-minded old man may have done. ..

But if you say he is an absent-minded old man, he is not fit to rule this complex country. It was not just that one instance--you saw during the course of his election speeches the number of errors he made... I don't know what he is taking, but I can see from his physiognomy that he is living on hormones. You can see from his round face, it's obvious that hormones are being pumped into the man.

How often did you meet him?

I was seeing him for the first time on 8th March after years. I tried to meet him before that but he never met me.

I don't know. Possibly someone tried to poison his ears, but I don't want to go into that. My opinion of him had already formed by the time I met him on 8th March, but I made that last-minute desperate effort to change it.

But there were those two crucial days of silence in between when it looked like you were reconsidering your decision to contest against Vajpayee?

You know that my son was not well and I went to London. I didn't know how long I had to stay there. I never said (that I would reconsider my decision). On the contrary, after he (Vajpayee) made that appeal, I said that it (contesting against him) was a matter of national duty, not a matter of friendship. I didn't know how long I would remain in London. Fortunately, I could return in time, and I did.

Why did you have to resign from the Vajpayee government?

I don't know, baba. That's another story I don't want to go into. He called for my resignation, he is the Prime Minister, and I resigned.

Attorney General Soli Sorabjee has said that you blamed him for your dismissal from the government. Did he have anything to do with it?

You later accused Sorabjee of advising the Hindujas on the Bofors case.

But he had taken permission from the government for that...

What bloody permission! Who was there to give him permission? You can't take permission to do something improper.

But you also ended up giving advice to the Hindujas, and at a much higher fee than Sorabjee had charged...

Did you have any differences with Vajpayee while you were in the government?

Plenty. The way he behaved about the appointment of the solicitor general. The way he related to Jayalalitha. Many differences-- I threatened to resign more than once. On the telecom policy we had major differences. I have no doubt that from that day they were trying to get rid of me.