Usurper Or Inheritor, The Irony Of Sasikala’s Succession Binge

What is it about Sasikala that brings forth resentment in people? 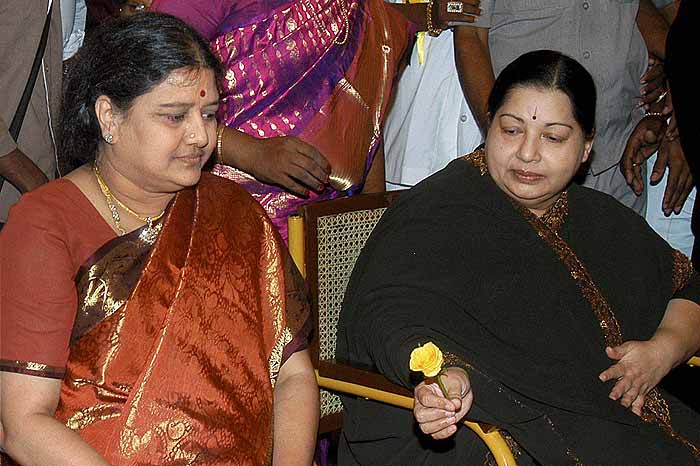 Sasikala seeking to stake claim to the Chief Minister’s chair in Tamil Nadu on 5 February 2017, within two months of the death of J Jayalalithaa has kicked off a huge debate on the politics of inheritance in a democracy.

Political inheritance is nothing new in India. In fact it is a malaise specific to Asia. Political history of the continent is dotted with daughters and sons inheriting democratic offices, with little or no resistance.

Rajiv Gandhi moved from the seat of the pilot to the chair of Prime Minister in 1984. Sonia Gandhi transformed from a homemaker into Congress party President after Rajiv Gandhi assassination and went very close to becoming the prime minister of India in 2004. Lalu Prasad Yadav nominated his illiterate wife Rabari Devi to chief ministership in 1997, after he was forced to quit over corruption.  Mehbooba was the natural choice to succeed Mufti Mohammad in Kashmir. The list is long.

In our neighbourhood, Sri Lanka saw the husband-wife-daughter succession of the Bandaranaike’s. In Bangladesh Sheikh Hasina took over leadership mantle from Sheikh Mujibur Rehman. In Pakistan Benazir stepped into her father’s shoes and after her death, her husband took up leadership. There are more examples that can be cited from Indonesia, Myanmar.

So what makes the case of Sasikala as the inheritor of the mantle of J Jayalalithaa a topic of such passionate discussion? Sasikala has been an associate of Jayalalithaa for nearly three decades. She was the shadow of the late chief minister in public appearances. Jayalalithaa even described Sasikala as her sister not born of the same womb.

Sasikala first came into big news for the wrong reasons. Jayalalithaa conducted the marriage of Sasikala’s nephew Sudhakaran in 1995 in the most opulent and vulgar manner possible, spending crores, decorating the streets of Chennai and showering jewels on the bride and the groom. In fact this wedding is the origin of the Disproportionate Assets case that dogged Jayalalithaa all her life and the verdict on which is awaited now vis-à-vis Sasikala on 14 February. It was then rumoured that this groom was going to be the heir of Jayalalithaa. However relations soon soured and Sudhakaran was thrown out of the life of the maverick chief minister. But Sasikala continued in the good books.

When Jayalalithaa faced cases of corruption, Sasikala was a co-accused as she had amassed wealth beyond her known sources of income and far too much from the humble origins as a video library shop owner. There is a clutch of cases against Sasikala. According to reports she faces cases of FERA violation, and cases of the Enforcement Directorate. Besides these, she is rumoured to have played ‘sinister role along with her extended Mannargudi family in capturing and promoting thriving businesses through shrewd bargains and deft deals.’

But Sasikala, within months was back in Poes Garden, seeking pardon from Jayalalithaa for all the done and not done crimes. She gave a written undertaking not to interfere in AIADMK affairs and never to enter politics, among other things. She also promised to keep her family away from her always. Her extended family moved into Poes Garden when Jayalalithaa died.

But during the last assembly elections, when Jayalalithaa was ill and rarely stepped out to campaign, it was said that Sasikala called the shots, in ticket distribution and post the victory had a say in all appointments – police as well as bureaucratic.

When Jayalalithaa was in the hospital, the only person who had access to her was Sasikala. This gave rise to a lot of heartburn and gossip and rumour on the health of Jayalalithaa.

The social media is full of stories against Sasikala, accusing her of many things. There is a list of properties owned by her, cartoons of her large extended family and their business interests. An opinion poll done by Times Now showed the public almost entirely against her. Channels like CNN-IBN have been running interviews with Apollo Hospital doctors that confirm conspiracy theory about Jayalalithaa’s health and treatment. She seems to enjoy very little public support. Absent are the hysteric crowds that take over roads in front of Poes Gardens at the least sign of trouble for Jayalalithaa.

So what is it about Sasikala that brings forth resentment in people? Those opposed to her point out that she is not even a high school pass. She was a personal aide of Jayalalithaa and not her political companion. Sasikala has been accused of corruption and amassing wealth. The number of property owned by her is reportedly way beyond imagination. She has cases pending against her, cases in which she was co-accused with Jayalalithaa. The public sees her as a usurper who went back on every single promise she made to Jayalalithaa when she was alive.

O Paneerselvam on the other hand is a man who has risen through the ranks. He started at ward level politics and steadily grew. Jayalalithaa, while nominating him as step-in chief minister detailed his contribution to the party in a speech for nearly five minutes. This speech is doing the rounds in Whatsapp and Youtube.

The intellectual community has taken a stand against Sasikala. Leading actors of Tamil, including Kamala Hassan and Gowthami have been vocal in opposing her. Gowthami has in fact been demanding CBI probe into Jayalalithaa’s death.

In dethroning Paneerselvam, did Sasikala show undue hurry? And is her continuing to live in Poes Garden, without any legal claim to the property riling all? Sasikala’s may well turn out to be a short-lived political history like that of Janaki Ramachandran, widow of MGR who tried unsuccessfully to inherit hismantle.

What Govt Thinks About The Issues It May Face If Women Are Inducted In Combat Roles?