US Synagogue Shootout: Trump Calls For Dealth Penalty For Accused

US President Donald Trump called for handing out death penalty to those responsible for mass shootings after Pittsburgh shootout. 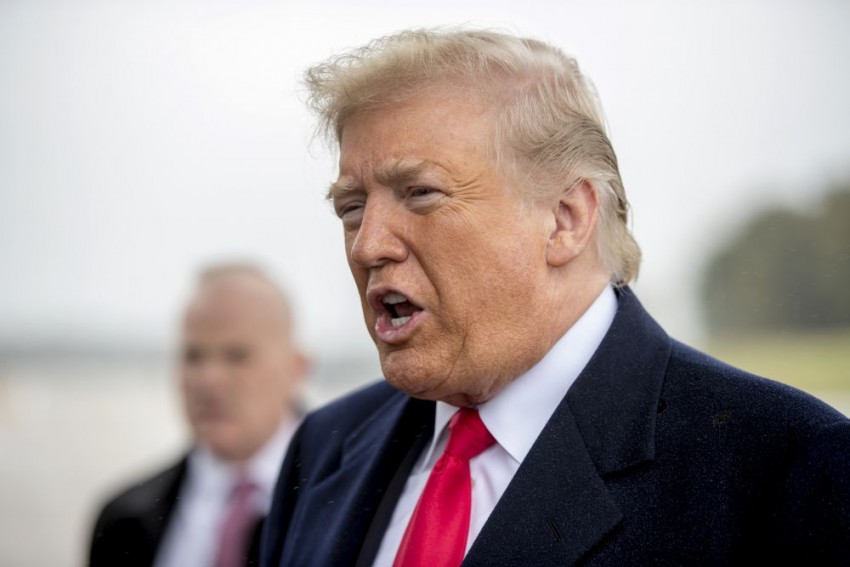 President Donald Trump speaks to reporters about a shooting at a Pittsburgh synagogue as he arrives at Air Force One at Andrews Air Force Base.
AP Image
Outlook Web Bureau October 28, 2018 00:00 IST US Synagogue Shootout: Trump Calls For Dealth Penalty For Accused 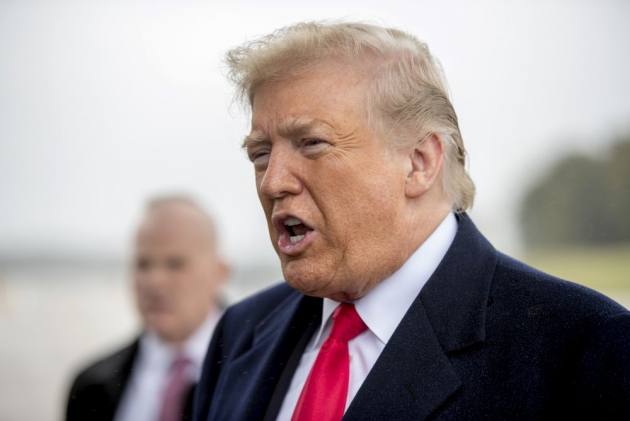 US President Donald Trump on Saturday called for handing out death penalty to those responsible for mass shootings after multiple fatalities were reported from a synagogue in Pittsburg.The shoouting that took place inside the Jewish synagogue 'Tree Of Life' is known to be one of the worst ones in US history.

A gunman opened fire at a Jewish synagogue in the US city of Pittsburgh on Saturday, with up to eleven people killed, local media reports said.

Among the injured are four police officers. The shooter, said to be a bearded white male, has charged with 29 federal crimes. He was taken to the hospital as he was injured during the exchange of fire with the police.

Describing the situation as "far more devastating" than he previously thought, Trump reiterated his call for arming people at places like this so that the shooter could have been prevented from going on a mass shooting.

Initial reports said that this was a hate crime.

According to the KDKA Radio station, the gunman walked into the building and yelled, "all Jews must die".

The tragic shooting took place at "Tree of Life" Congregation Synagogue at Squirell Hill in Pittsburg, where a large number of people had gathered for a morning service.

Trump, before boarding Air Force One at Andrews Joint Airforce base for events in Indianapolis, underscored the need to "stiffen up" laws regarding the death penalty.

"They should pay the ultimate price". Results could've been much better had there been armed guards," he said.

"If they had some kind of protection inside the temple maybe it could have been different," Trump reiterated his well-known view on mass shooting, which has been criticised by rights bodies and political opponents.

Trump spoke with the Pennsylvania Governor and Pittsburg Mayor.

"To see this thing happening again and again is a shame. The world is a violent world... I think one thing we should do is we should stiffen up our laws in terms of the death penalty," he said, adding that "something has to be done" about violence perpetrated by a "madman" or "wacko".

As you know, earlier today there was a horrific shooting targeting and killing Jewish Americans at the Tree of Life Synagogue in Pittsburgh, Pennsylvania. The shooter is in custody, and federal authorities have been dispatched to support state and local police... pic.twitter.com/WqO7GfPyMT

He acknowledged that some people disagree with him.

Responding to a question, Trump said that things could have been much better if there was an armed person inside the synagogue.

"This is a case where if they had an armed guard inside, they might've been able to stop him immediately," he said, adding that except for the shooter nobody would have been killed today.

Describing it as a "very very difficult situation" Trump said results would have been better if there was an armed guard inside the temple.

According to Michael Eisenberg, past president of Tree of Life Synagogue, the shooting happened during weekly Shabbat services at the Jewish Synagogue.

At that time, three simultaneous congregation services were taking place.

Pennsylvania Governor Tom Wolf described it as a tragedy.

"The shooting in Pittsburgh this morning is an absolute tragedy... These senseless acts of violence are not who we are as Americans. My thoughts right now are focused on the victims, their families and making sure law enforcement has every resource they need. We cannot accept this violence as normal," Wolf said.

"Monitoring reports of shooting at Tree of Life Synagogue in Pittsburgh. Praying for the fallen, the injured, all the families impacted, and our courageous first responders. God bless them all," Vice President Mike Pence said.

Trump on Saturday said he will travel to the Pennsylvania city of Pittsburgh, where a gunman opened fire at a synagogue and killed 11 people.

Trump, who is in Illinois for a campaign rally ahead of key November midterm elections did not provide details of his trip that comes in the wake of the fatal shooting, which he earlier dubbed an "evil Anti-Semitic attack" and an "assault on humanity."

All of America is in mourning over the mass murder of Jewish Americans at the Tree of Life Synagogue in Pittsburgh. We pray for those who perished and their loved ones, and our hearts go out to the brave police officers who sustained serious injuries...

"All of America is in mourning over the mass murder of Jewish Americans," the Republican president tweeted.

US Synagogue Shootout: Accused Charged With 29 Counts Of Federal Crimes