The State Department expects to be able to offer the option to nonbinary, intersex and gender-nonconforming people early next year. 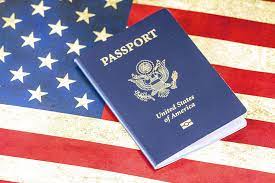 The State Department is expected to announce Wednesday that the United States has issued its first passport with an “X” gender designation — a milestone in the recognition of the rights of people who don't identify as male or female.

That's according to a U.S. official, who spoke on the condition of anonymity ahead of an expected announcement.

The State Department expects to be able to offer the option to nonbinary, intersex and gender-nonconforming people early next year, the official said.