UP: Inter-Faith Couple Harassed By Officer Get Passport After Tweeting To MEA Sushma Swaraj

Seth claimed that she was being harassed as the officer questioned her marital status, asking her why she had not changed her name after marrying a Muslim man. 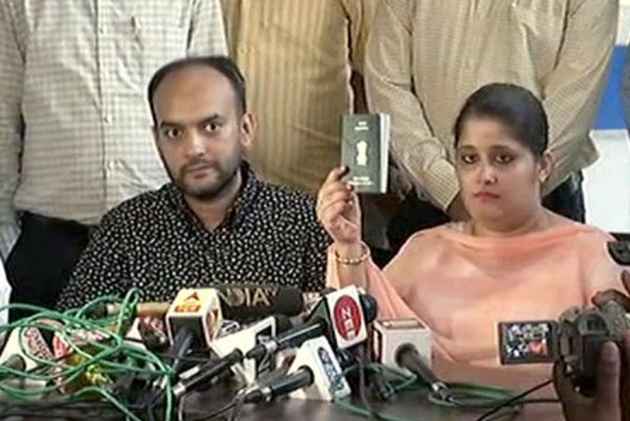 A woman in Uttar Pradesh's Lucknow, who earlier alleged that she was harassed by an officer at a Lucknow Passport Office has now received her passport.

The couple, Tanvi Seth and Mohammad Anas Siddiqui claimed that they were being harassed by an officer at a Lucknow Passport Office, as the former was married to a Muslim and had not changed her name.

Seth claimed that she was being harassed as the officer questioned her marital status, asking her why she had not changed her name.

The woman, while addressing the media, said that she was thankful to the officials for timely response.

While flashing the issued passports, Seth said, "We hope it doesn't happen to anyone else. In our 11 years of marriage, we never faced this. Later, officials apologised and we got our passports."

Siddiqui said, "I was told I should change my religion and take 'pheras'. We have all legal documents to apply for a passport. We had tweeted to Sushma Swaraj ma'am and we were asked to meet an officer at the regional passport office. I am thankful to the officials for taking up the matter."

The Regional Passport Office, Lucknow earlier clarified that the passports of the inter-faith couple have been issued, adding that strict action will be taken.

"Their passports have been issued. A show cause notice has been issued to the official who was at fault, action will also be taken. We regret the incident and will ensure it is not repeated," the officer told media.

Earlier Seth, describing her ordeal told ANI, "It was a humiliating experience. The officer was very loud and made attacking hand gestures."

Filing a complaint on this matter, Seth on Wednesday took to Twitter to address her grievances. In a series of tweets, Seth wrote to External Affairs Minister (EAM) Sushma Swaraj and demanded justice.

@SushmaSwaraj hello ma’am I type this tweet with immense faith in justice and in you and ironically with a lot of anger / hurt and agony in my heart because of the way I was treated at the Lucknow passport office at Ratan Square by Mr. Vikas Mishra the reason because I marri 1/2

Seth claimed that the officer spoke to her rudely and others in the passport office did not even react to his "rude demeanour".

@SushmaSwaraj 2/2 married a Muslim and not changed my name ever. He spoke to me very rudely and was loud enough for others to hear while discussing my case. I have never felt so harassed ever before. The other workers at the office acknowledged his rude demeanour.

The woman also asserted that the officer also kept her husband's passport on hold.

Furthermore, Seth went to say that she never felt humiliated in the last 12 years of her marriage.

Continuing her tirade against the officer, the woman claimed further that if she had changed her name after marriage, then such an issue would not have cropped up.

Swaraj is yet to react to the latest development so far. (ANI)