Trouble In The House Of Saffron

As the BJP tries to reinvent itself, its new face is not readily acceptable to its ideological siblings. Whatever be the outcome of the current crisis, it is not going to be the last one the Sangh Parivar will face during this phase of transformation 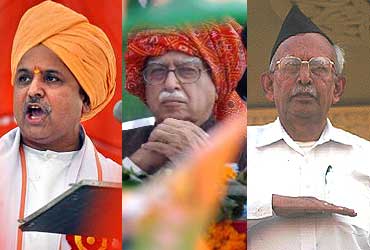 The resignation of L.K Advani from the post of president of the Bharatiya Janata Party reflects the significant changes which Hindutva politics is being forced to undergo. The components of the Sangh Parivar, as would be apparent from the unfolding drama over the resignation issue, are locked in a deep conflict over the division of power in the movement and its ideological direction.

Though important as mobilizing assets and ideological fountainheads, the RSS and the VHP do not fight elections and therefore do not hold any electoral mandate which the BJP, being the electoral face of this movement, does.

During his recently concluded Pakistan visit, Mr. Advani did three seemingly embarrassing things as a Hindutva ideologue: He praised Jinnah’s secular intent (though it is clear that he was careful in his choice of words and only called him a 'great leader' and termed his August 11 1947 speech as a 'great exposition of a secular state’), regretted the Babri Masjid demolition and recognized Pakistan’s right to exist as an independent nation state.

By doing so, it would seem, as if he had waved a red rag in the face of the already estranged elements in the Sangh Parivar, who have been prompt in demanding his head. As the drama unfolds, some may argue that this is Advani’s final attempt of telling the party, and the rest of the parivar, who the boss is in the BJP. After all, in recent times both Vajpayee and he have come under severe attacks from within the parivar.

However, the current episode, which has created open fissures in the parivar, has to be viewed in the light of a broader change, with the balance of power shifting between the BJP and the two affiliates. Moreover, the electoral compulsions facing the party have altered. As it responds to these, ideological inconsistencies, as are apparent now, will get more pronounced within the parivar.

The BJP has had a successful electoral run over the past decade and a half, which included a six-year tenure as the ruling party. This has changed the party in two significant ways. First, different centers of power have arisen in the party, as some party leaders at the center and at the state level were able to develop and spread their individual patronage networks. These leaders no longer feel as accountable to the agenda of either the VHP or the RSS. Second, many of its current members have not found their way into the party through the RSS and cannot be remote controlled by the organization.

Contrary to popular belief, the parivar, which was never a monolith, is more scattered today than ever before. It is undergoing a transformation resulting from struggles between powerbrokers on the one hand and ideologies on the other. In fact, it is a lack of a command and control structure within the parivar which has resulted in the regular surfacing of disagreements and discord between the different outfits.

Need for Reinventing the Party

Mr. Advani is one of the key architects of Hindu nationalism’s electoral success, so why this backtracking from the party’s popular positions? Simply put, bashing Muslims and Pakistan as a mobilizing strategy has limited returns in today’s political environment. Mr. Advani perhaps grasps this political reality.

As the BJP has emerged as a national party, its Hindutva rhetoric has run in to the wall of numbers. In most of the electoral districts, with Hindus forming an overwhelming majority, and these days a more politically fragmented one, Hindu insecurity is difficult to invoke, and when invoked, even more difficult to sustain. In India, party fragmentation has occurred at the national and state level, and two party systems have turned into multi-party systems with coalition politics being the order of the day. In this environment the BJP has to either reinvent itself, or stagnate.

It is facing two compulsions. First, the party has to come across as a compatible coalition partner to most, if not all, of the other parties in the process of building electoral majorities. Right now, its Hindu chauvinist image discourages some of the regional parties (which often rely on minority support) to ally with it. Second, electorally important states like Bihar and Uttar Pradesh are home to a significant number of Muslims. Here the party competition at the level of the electoral district is relatively high as compared to the rest of the country, and the value of every vote has increased. In these states, antagonizing the Muslim vote is a costly strategy in the long run. If the Muslim voter can be dissuaded from following the "Anything but the BJP" voting strategy, the party stands to benefit.

As India’s largest opposition party, the BJP is trying to reinvent itself. Its new face, however, may not be readily acceptable to its ideological siblings. Whatever be the outcome of the current crisis, it is not going to be the last one the Sangh Parivar will face during this phase of transformation.

Amit Ahuja is a Ph.D candidate in the Department of Political Science and a Predoctoral Fellow at the Rackham School of Graduate Studies at the University

of Michigan in Ann Arbor