'...they know nothing about our cricket or our system, when they are here they agree with everyone but once they go back after raking in the moolah, they come out with such allegations.' 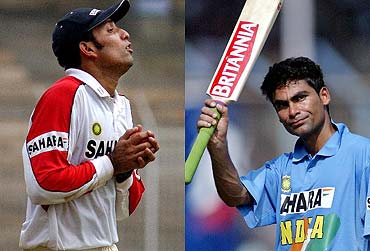 T.A. Sekhar, ex-India player and former South Zone selector: Wright is exposing himself by writing totally untrue matters like this after five years. After having earned over 200 thousand dollars annually for five years, it is obvious that he wants to make some more money by writing such things so that the book sells well.

He never owned his responsibilities or took blame during his tenure as coach. Why has he not explained his acts of dumping players to please someone.

Laxman was in great form during 2003 but Wright got his way through by insisting on the selection of Dinesh Mongia in Laxman's place. If the selection process was regionalised (as Wright alleges), how come the team was able to perform so well in 2003 World Cup.

Ashok Malhotra, ex-India player and former East Zone selector: I think he is trying to sell his book by raking up all these controversies.

There is a lesson for us in this -- these mercenaries come to India, stay here for four-five years, they know nothing about our cricket or our system, when they are here they agree with everyone but once they go back after raking in the moolah, they come out with such allegations.

I accompanied the team to Bangladesh (in 2004). I saw in team meetings Wright never uttered a word on strategy, it was Sourav who did all the talking.

He is now criticising Sourav for bringing in (Sunil) Gavaskar (as batting consultant during the series against Australia in 2004). If he had a problem why did he not resign there and then?

Chandu Borde, ex-India player and former selection committee chairman: Wright's comments are in bad taste. After all, he was present in all our meetings as a coach and he never expressed such things. He used say that he was happy about the players given to him.

How can Wright blame us for such things now? In my era as chairman of the committee, we always gave best players to perform for India.

What is the guarantee that Chappell will not go back to Australia after his tenure as coach and write like what Wright has done.

The zonal system has been existent for decades. In 1980-81, we squared the series in Australia and won it in 1982. The system was the same (during all that time).

When we won the 1983 World Ccup in England, Chandu Borde was the chairman of selection committee.

Is Wright questioning the capabilities of Borde, who was also the chairman during Wright's time?

Ajit Wadekar, ex-India captain and former selection committee chairman: It has been going on for ages. It has been happening mainly because of the zonal system of nominating selectors. I reiterate that I have been pointing this flaw in our system. The board needs to act on this at once and have just a three member committee of reputed former international cricketers.

Even during my days as selector, such things used to be a regular feature. The first 12 or 13 players would be automatic choices and the remaining two or three will be picked by three or four selectors ganging up together.

In fact, they used to meet even before coming for the meeting and will be predetermined on the selections. Most often, I used to be stranded at meetings and my suggestions were never accepted by the majority, who would have preplanned on taking some players. I do not want to pinpoint any selector. I stopped it when I became the chairman of the committee.

Raj Singh, ex-BCCI chief and former selection committee chairman: It is sad but I am not surprised. John was a good friend of mine. He always spoke to me on these matters. John also had told me how difficult it was to work with Sourav Ganguly. He had said to me that the team meetings used to held for over a good period of two hours and then Ganguly used to change plans in the middle.

Niranjan Shah, BCCI secretary: What does John Wright know about India? He comes from a small country which does not have the huge number of cricketers which we have. We have been doing a very good job over a number of years.

It's a democratic process. What's wrong in selectors backing players from their region if they know their potential? Do not our Members of Parliament talk about issues concerning their region in the House?

He's talking about (Sunil) Gavaskar helping the players as the team's batting consultant even though he was present as the coach. He should have raised the issue then and not kept mum if he was not happy.

He should have raised the issues when he was in the job and not after having made a good packet as compensation. What's the use of talking now.

Virender Sehwag, India player: Talented players get picked whether he is from West or North Zone.

Obviously when you have a North Zone selector in the committee, he will make a mention about players who have been performing well at the meeting.

The player does not get selected because he is from North Zone. Ultimately it is the decision of the five selectors.

If you want more details you speak to John Wright as he had attended all meetings in his five-year stint.