'The Prime Minister And President Of Tamil Eelam'

The battle fatigues may have given way to a safari suit, and the moustache shaven, but by reiterating old positions Velupillai Prabhakaran in the end left many wondering about the very purpose of the press conference. 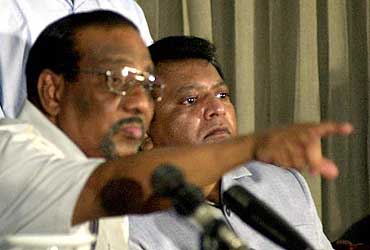 outlookindia.com
-0001-11-30T00:00:00+05:53
The much-hyped press conference by a dreaded terrorist to some and a heroic freedom fighter for others, his first public appearance in twelve years -- particularly, as it came in the wake of the ceasefire agreed between the Tamil Tigers and Sri Lankan government forces in late December last year -- seems to have put a reality check on the optimism that a possible end to a conflict that has killed more than 65,000 people might be in sight.

The 47-year old Tamil leader who finally appeared at the venue of the press conference in his now standard blue-grey safari suit, surrounded by armed bodyguards, a little after 5.30 p.m -- it was scheduled take place in the morning -- spoke in Tamil during the the two-and-a-half hour press conference while sitting next to him, the London-based Anton Balasingham, acted interpreter, often embellishing Prabhakran's remarks with his own.

Prabhakaran sidestepped the key question on whether the Tigers will be seeking a separate Tamil state or greater autonomy within Sri Lanka saying that the rebels would respond to what offers the government put forward:

"I do not think that the necessity has arisen for us to renounce the goal of Tamil Eelam yet. The right condition has not arisen for the LTTE to abandon the policy of independent statehood,'' Prabakaran said.

"Tamil Eelam is the demand of the Tamil people and not the LTTE."

"The struggle for political independence is the demand of Tamil people ever since 1977 when the Tamils fought the elections on the issue" he said adding that the Sri Lankan government must recognize the following:

"Once these are accepted or a solution recognizing these core issues are put forward and are acceptable to the Tamil people, then we will consider it," he said, referring to the demand of a separate state. 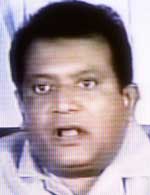 While Prabhakaran made all the expected noises, claiming that the campaign of suicide bombings -- high-profile victims of which include the former Indian Prime Minister, Rajiv Gandhi and the former Sri Lankan President, Ranasinghe Premadasa -- was a thing of the past --.he insisted that the Lanka government must lift its 1998 ban on his organisation before direct talks planned for next month.

"Only after de-proscription will we take part in the peace talks.....That is our postion," he said making it clear that he would not attend the Norwegian brokered peace talks but would direct the negotiations in Thailand, apparently because of a red corner notice pending against him.

While he expressed satisfaction with the pace of the peace progress and complimented the Sri Lankan Prime Minister, Ranil Wickremesinghe, for `"the bold steps'' taken by him he added that the Sri Lankan Government was at the moment not in a position to offer an acceptable formula, which was why the LTTE had suggested an interim administration to give time to prepare its people for a permanent solution.

In response to a question, he said his instructions to his cadre to kill him if he compromised on the goal of an independent state remained.

Underlining that the LTTE did not recognise the authority of the Sri Lankan state, Balasingham claimed that while Mr. Wickremesinghe is the Prime Minister of Sri Lanka, Prabhakaran is "the Prime Minister and President of Tamil Eelam".

'Diversity Is The Proud Source Of India's Unity And Strength'