Is it just me or do you too feel that for a change there was less stereotyping of the Muslim image this time, and there was a greater effort to see a terrorist as a terrorist, independent of any religious and cultural affiliations? 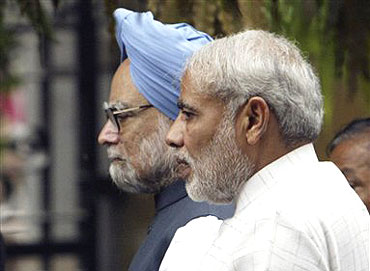 Allow me to present an observation in the context of the recent serial blasts in Bangalore and Ahmedabad. I am not entirely sure as to how it is actually playing out at the ground level, and in the interstices of this huge and complex republic, but post the two blasts, for a change, it appears there is less pressure on the Indian Muslim to prove his nationalist credentials. It would seem, at least to me, that he is not being cornered and excluded. On the contrary, he too is being seen as a victim of the attacks and not a a 'sympathiser' or even a 'perpetrator' of the grand anti-national design.

It is of course too premature and dangerous to say that all the prejudices have dissolved, but certainly there is some let-up in the anti-Muslim rhetoric. There was less stereotyping of the Muslim image this time around in the media and there was a greater effort to see a terrorist as a terrorist, independent of any religious and cultural affiliations. Or so it appears to me.

I wonder if this is a result of the momentum generated by the nuclear debate in Parliament, where Muslim leaders rubbished the claim of certain political parties that the deal was "anti-Muslim". After the blasts had taken place, the emphatic and reverberating statement of Omar Abdullah in Parliament that he is "both an Indian and a Muslim" sounded almost like a warning to people who usually gave an oxymoronic spin to it. Interestingly, not even loony political elements across the country suggested that the blasts were a result of Muslim anger against India's deal with the US. How should we read this? Is this only a temporary reprieve? Is this about the maturing of a polity? We do not know, but then let's revel in it as long as it lasts.

My cautious optimism also stems from the curious and continuous frames one saw of Narendra Modi and Manmohan Singh together, with Sonia Gandhi in the vicinity, visiting blast sites and victims in Ahmedabad. Two leaders from two political parties that have nothing but bitterness to share were for a change complementing each others' efforts and statements. They put up a united front and ensured there was no negative spillover whatsover.

In fact, after Manmohan and Sonia's visit to Ahmedabad the BJP even officially distanced itself, albeit belatedly, from the statement of Sushma Swaraj linking up the blasts with the cash-for-vote scam. Similarly, Yeddyurappa's statement that the blasts was a "conspiracy" to defame his government had no buyers inside his own party or the media. It was as if to suggest that there was no room for pettiness anymore. The media too was recording one Muslim victim after the other in the blasts and did not jump to make conclusions. They stuck to reporting the enormity of the tragedy. Only occasionally, the old enemy ISI was called to question.

This was clearly not the case when the Kaleel Ahmed, Sabeel Ahmed and the Mohammed Haneef case broke exactly a year ago. To sift through the opinion that was being circulated and wade through the prejudice of the us-and-them debate had been a difficult exercise then. For instance, the guesses made about the ideological leanings of the Ahmed brothers and their family had turned farcical. While some said that the brothers had radicalised after they became members of the Tabligh-e-Jamaat, a revivalist Islamic organization, family sources had argued that they were more drawn to the Salafi movement.

The first to link the Ahmed brothers to the Tabligh-e-Jammat was an official of the Jamia Hazrat Tippu Mosque, opposite the house of the Ahmeds. He had said in his interaction with the media that the two boys had undergone a transformation after they had joined the radical organisation. He wasn't sure though if the local unit of the organisation had radicalised them or it happened during their stay abroad. As a counter, an Islamic scholar had told me that if the boys had in fact joined the Tabligh they would have never committed the terror act. What he meant was that the Tabligh as it exists in Bangalore and Karnataka is most "harmless" as it either dealt with matters that are "below the surface of the earth or heaven" and not with what is real, present and political.

When I had consulted Abdul Salam Puttige, the editor of a Kannada daily, he had recounted what an intelligence officer had told him after attending a Tabligh camp in the state: "They speak nothing current and the deadliest weapon they carried was a toothbrush." This again was countered by others when they said that this may be true of the Tabligh in Bangalore and Karnataka, where they have a minimalist presence, but Western accounts of the organisation are very harsh. "They are referred to as a wolf in sheep's clothing," they said. Besides the Tabligh-e-Jamaat, there was a strong mention of Kafeel and Sabeel's father Dr. Maqbool Ahmed's association with the Jamaat-e-Islami.

There were no buyers then for the argument that Muslims of Karnataka, like Muslims elsewhere in India, are a heterogeneous lot. In fact the diversity is so rich that Daccani Muslims are entirely different from Byaris in the coastal areas. Some Pinjara Muslims also take the lord at Tirupati as their personal deity. Another Muslim group around Bagalkot area make 'istalingas' for Veerashaivas in Karnataka. The Nawayati Muslims write Konkani in the Nastaliq script used for Urdu. The Sufi tradition is vibrant across the state and the mystical compositions of Shishunala Sharief are as popular as that of Purandara Dasa.

But then, and even now, Muslim scholars agree that post-Babri Masjid there has been an effort to create a universal Muslim brotherhood in Karnataka as in other parts of India. Muslims are often urged to overlook their local differences to stand united. Despite these efforts by various forums to create a universal agenda for the community in Karnataka, the process of radicalisation is viewed with a great deal of suspicion among the older generation of Muslims. Kannada journalist N A M Ismail had said: "In our village near Sakleshpur in Hassan district, if a Muslim boy starts sporting that typical untamed beard, the parents get anxious. They immediately know that he is slipping out of their control. A different kind of conflict begins at home. They start cleaning up the place of what they think is un-Islamic and even start an argument about making a 'mannat' at the local dargah. Karnataka Muslims have a strong dargah-going tradition, by which I mean the Sufi element is strong."

So what I was given to understand then was that the problem was not so much with the older generation, but with the younger generation like Kafeel and Sabeel, who were exposed to radical literature and contacts abroad. A maulvi had confirmed the generation gap: "Our youth ask very difficult questions and we have no answers. The questions relate to Israel, Palestine and Iraq. The situation there has made them very nihilistic. We tell them about Islamic values, patience but they only ask us more questions. If you answer wrongly they lose trust in us."

Thank god, this time around, after the blasts in Bangalore and Ahmedabad, one did not have to revisit the labyrinth of these arguments, essentially because an Indian Muslim was not being suspected. The blame lay squarely at the door of a terrorist and he surely has no religion or nationality.

'One Of The Saddest Days Of My Life'