'For the first time in my 15-year career the FIH president has congratulated the Indian hockey team. It shows we are moving in the right direction and are on track to regain lost glory.' Updates 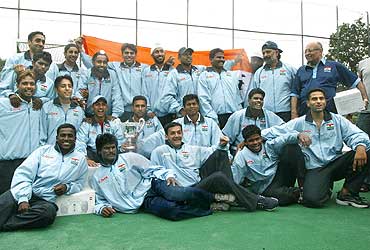 Indian hockey is surging resolutely towards regaining lost glory and has already made "The world stand up and take notice" of its successes against quality opposition, captain Dhanraj Pillay said.

Soaking in the joy of winning the tough four-nation Hamburg Masters in Germany, Pillay, on his arrival in the Capital this morning, said India would now go into the Champions Trophy in August with their morale high.

"The last one-and-half years have been really good. And the back-to-back wins in Australia and Germany have boosted our morale and confidence tremendously ahead of the Champions Trophy," the captain said.

Pillay said the team's performance had made the "World stand up and take notice of Indian hockey," as was evident when the president of the FIH, the game's international body, personally congratulated the side.

"It is the first time ever in my 15-year career that the FIH president has congratulated and appreciated the Indian hockey team. It shows that Indian hockey team is moving in the right direction and is on track to regain lost glory," Pillay said.

"India is not right at the top but we are certainly in a position to intimidate any opposition."

While giving credit to the entire team for the triumph in Germany, Pillay singled out Gagan Ajit Singh, the player of the tournament, and Devesh Chauhan as the revelation of the tour.

"Gagan Ajit Singh did not have a particularly good Australian tour as he managed to score only three goals. But he had promised me before we left for Germany that he will deliver his best and he did. He proved that he is one of the best strikers in the world," he said.

"Devesh also impressed a lot with his keeping and it was because of him that we conceded very few penalty corner goals."

However, more than individual effort it was team unity which helped India win matches, Pillay emphasised.

"We played very well as a unit and our mutual understanding was also very good. We also used to speak to the IHF president on a daily basis and there was consensus on every matter," said the captain.

Pillay's words rang true as the camarederie was evident and almost palpable. The players joked, and hugged and even garlanded each other in jest as if exorcizing the ghosts of the past when Indian hockey was riddled with factionalism.

Pillay, who has played in the German league before, said he was thrilled to see a nice crowd at Hamburg which was hosting a multi-nation hockey tournament for the first time.

"We were especially delighted to see small kids flock to watch our games," he said.

Pillay admitted that luck had been on India's side too. "After we had defeated Spain 4-2, we waited with bated breath to know the outcome of the Germany-Argentina match. "It was a very tense 70-minute for all of us. I was perspiring in the last 5-10 minutes when so much action took place. Argentina must be given credit for the way they played against the world champions. A 4-4 result almost seemed incredible and read like a tennis score."

India lost to Germany but won their matches against Spain and Argentina to finish on six points, one point ahead of the hosts. A draw result for Germany in their last match against Argentina saw India surge ahead and clinch the trophy.

Pillay said India could have also won the one-off Test against Germany preceding the Hamburg Masters but added that he was satisfied with the result.

"We played 70 minutes of attacking hockey against Germany which was fielding the same side that had played in the World Cup. I do not know what was their strategy, but both the Test and the four-nation event was very important for them as they were playing at home. But with a little bit of more luck we could have won against them."

The Indian captain said the team still had weaknesses which needed to be ironed out ahead of more important assignments ahead. "We have still to work on our weakness of conceding goals in the dying minutes. I hope we will gradually overcome this shortcoming."

Asked whether he considered himself a lucky captain, Pillay replied in the affirmative but added modestly that a captain was as good as his team. "I have won both the tournaments as captain but I think the credit should also go to the team," he said.

Pillay said despite the recent successes, India would still go into the Champions Trophy as underdogs. "The Indian hockey team is always the underdog and never a favourite," he joked as his exuberance rubbed off on his teammates and fans.