The real choices facing the US at this point all involve withdrawals of one kind or another of US military forces from Iraq. But all withdrawals are not equal. Besides, failing in Iraq, however expensive, would not preclude succeeding elsewhere. 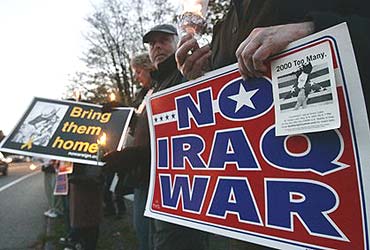 To be sure, there are alternatives. One is to increase the level of American troops. This is something that can be done, but only by a small amount and then only temporarily. The US Army cannot stand the current level of deployments and operational tempo indefinitely. More important, there is little evidence to suggest that more troops will turn around the security situation on the ground in Iraq and slow or end the sectarian conflict. Failing that, there is no chance that the political situation on the ground in Washington, DC, will long support a policy that has already claimed nearly 3000 American lives and cost hundreds of billions of dollars.

Another alternative would be to declare Iraq a ward of the international community and establish some form of trusteeship until such a time that Iraq's government can assert authority over the entire country. However desirable this might be, it is not going to happen as there is no appetite or capacity in the United Nations or among its member countries for taking on such a difficult task.

The real choices facing the US at this point all involve withdrawals of one kind or another of US military forces from Iraq. But all withdrawals are not equal. To the contrary - they differ fundamentally in their pace, rationale and consequences.

The strong preference of President Bush and his administration is for performance-based withdrawals. This has been the stated US policy for some time and remains so. "Staying the course" may have been jettisoned as a phrase, but it remains as a policy. The idea is that the 144,000 American forces - together with the 17,500 soldiers from coalition partners - will only come out of the country as Iraqi military and police forces demonstrate they can assume the security burden and maintain order.

This is the most desirable option, as it would create a stable Iraq that would no longer require a massive and costly American and international presence. It is also desirable in that it would avoid the direct and indirect costs of withdrawing before the objective of building a sustainable order was realized.

The problem lies not in the desirability of this approach but with its feasibility. The situation in Iraq is getting worse despite a democratic constitution and several successful elections. Terrorists, Sunni insurgents and Shia militias are targeting and killing one another, government forces and officials, and civilians. Iraqi government forces, despite being trained, equipped, advised and supplemented by American troops, show few signs of being able to maintain order in the country's center, home to Baghdad and most of Iraq's approximately eight million Sunnis.

A second withdrawal option, one often put forward by various Democrats, is calendar-based. This approach is based on an assessment that a performance-based policy cannot succeed, that the day will never arrive when the Iraqis can stand up sufficiently so that the US can safely stand down.

This option comes the closest to a classic exit strategy, one in which US policy is determined by the calendar rather than by conditions on the ground. The advantage of such an approach is that it cuts the immediate costs (human, military, and financial) of maintaining a presence and allows US forces to recover and be used elsewhere.

The obvious downside is that conditions in Iraq would almost certainly deteriorate further, producing a full-scale civil war that would kill and displace tens or even hundreds of thousands. Such a war could draw in one or more of Iraq's neighbors and spread to other parts of the Middle East. What is more, the US reputation for dependability and steadfastness would suffer. This could only encourage terrorists and radical forces and states in the region and beyond-and discourage America's friends and allies in the region and beyond.

A third approach to withdrawals can best be described as conditional. Under such an approach, the US would inform the Iraqi government - ideally, following intense consultations - that US troops will be removed unless the Iraqis demonstrate that they are able and willing to meet certain tests or standards by a specified date. Such standards could be military, i.e., achieve a certain level of proficiency, or political, i.e., gain broad agreement on new power- and revenue-sharing arrangements. Most likely, they would need to be both.

This third, conditional-withdrawal approach is another way of casting the first two approaches. If the Iraqis meet the tests in time, then this form of withdrawal resembles the existing performance-based strategy. However, if the Iraqis fail to meet the tests, then the withdrawal would take place after the deadline had passed. It thus would come to resemble in practice a calendar-based exit strategy, with the important difference that a substantial share of the onus for the policy change would ostensibly be on the Iraqis for their shortcomings rather than on the US stemming from a lack of resolve.

This last option of conditional withdrawal is hardly ideal, but it is the least bad course available to the US. This is a time for realism, not ambition.

Under this approach, two initiatives could help. One, already alluded to, is to link continued US military effort to the brokering of internal arrangements that provide for considerable regional autonomy, the sharing of revenues derived from oil sales, minority rights and the standing down of militias. Additional economic aid could be tied to such agreements as a way of increasing the incentive of Iraqis to show more flexibility and moderation.

A second would be to propose that governments with a major stake in Iraq's future meet with Iraq's leaders in a formal gathering. The model here would be the so-called 6 plus 2 forum that was used to ease Afghanistan's transition from Taliban misrule to democracy. The goal would be to limit some forms of external interference - and to encourage those forms of involvement that could help put Iraq back on its feet. This would require the participation of both Iran and Syria, two states who have contributed to Iraq's internal problems, but who also have a stake in its territorial integrity and viability.

It is quite possible, of course, that neither of these efforts will yield fruit. Persuading Iraqis to agree to a new pact that is enough for most Sunnis and not too much for Iraq's Kurds and Shia will be exceedingly difficult. Meanwhile, several of Iraq's neighbors may not be willing to curb their mischief-making. Iraq could well descend into all-out civil war.

If this happens, US forces should be withdrawn from Iraq's center, as there is little or nothing they could accomplish there in such circumstances. Iraq, an ill-advised and poorly executed war of choice, would be effectively a failed state for some years. In the meantime, the US would have to look for ways to offset this foreign-policy setback by demonstrating that it could still be an effective and reliable actor, something that could involve reinvigorating diplomacy between Israel and both Syria and the Palestinians, tabling new offers to North Korea and Iran, or doing something to halt the unraveling of Afghanistan or the genocide in Darfur. Failing in Iraq, however expensive, would not preclude succeeding elsewhere.

Richard N. Haass is president of the Council on Foreign Relations and author of The Opportunity: America's Moment to Alter History's Course. Rights: © 2006 Yale Center for the Study of Globalization. YaleGlobal Online

The Return Of War