The Way We Treat Our Icons

While Agassi was the local favorite and the Americans took pride in designating the USTA tennis center his home, anyone who tries to speak up for Ganguly is labeled a regional bigot... 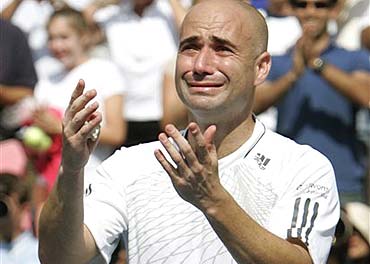 It was 4.30 am in Melbourne. Yet, we were all glued to the television set watching what transpired to be Andre Agassi’s farewell match at the US Open. With each second serve by Benjamin Becker, the expectancy went up—may be the cross court or the famous down the line will be unleashed for one final time, may be the veteran still has some magic left. However, when Agassi continued to miss routine returns the maybes turned the other way —may be the hand eye co-ordination is not up to the mark, may be the Baghdatis match has finally taken its toll, may be it will be Benjamin Becker who will script his swansong turning the clock its full cycle, may be every great thing has to come to an end. And it did.

Agassi lost a hard fought third round match against his un-fancied opponent and ended what has been a miracle career in modern tennis. With every tear drop that he shed soon after, he endeared himself more to his fans who wept with him, pleaded him to stay on at the court for a few final minutes and wanted one last autograph. This is what a farewell should be like, the last hurrah for a real champion who has given tennis a lot to cheer about.

That Agassi will lose at some stage was a foregone conclusion. None, not even his most ardent of supporters, had thought that he will make the final like he did last year. And with a bad back, the end was near. However, that it will be a real spectacle when 24,000 fans wept and cheered him on was simply unbelievable. Even Becker looked like a convict having just performed a criminal act and hardly celebrated his first ever fourth round advance in the Open. 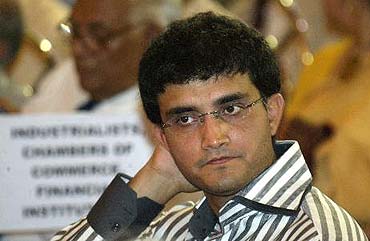 And this is where my mind turned to Saurav Ganguly.

Yet another team selection, yet another disappointment. Not that it was unexpected. In fact, just like Agassi’s fans, not even the most ardent of Ganguly’s supporters expected a national call-up this time, more so because he did not have a single opportunity to prove himself since being named in the list of 30 probables. Had the selection been done on the 7th and had Ganguly scripted a fairytale like Agassi's Baghdatis one on the 6th at the Moin-ud-daula trophy, things may have been different.

First, the obvious parallels between the two icons: both play their sport with real intensity, their supporters look forward to gulping everything published about them in the media, both are huge crowd pullers, and both have had checkered and also controversial careers. These are real, tangible and palpable parallels, for sure.

While Agassi will continue to be hailed as a legend and people will keep talking about the way he retired, Ganguly has not been given the opportunity to finish off with a flourish. Rather, it is contingent on him to remind the selectors that he still wants to fight on and nurtures the dream of playing for India one final time. And while Agassi was the local favorite and the Americans took pride in designating the USTA tennis center his home, anyone who tries to speak up for Ganguly is labeled a regional bigot.

One simple Google search and the politicisation of the Ganguly affair become apparent. Rather then saying the Indian team for the Champions Trophy has been announced, more than 2/3rd of the news reports start with headlines that declare Ganguly fails to make it to the national team yet again. In fact, there are suggestions that this might even be the end of the road for him. It is here that the whole charade turns nasty.

Did the selectors not know that Ganguly would not have a single match to prove himself between the naming of the 30 and final pruning to 14? Did not they know that his selection has become highly politicised in the light of events that have unfolded within the BCCI lately? Did they not realize that by naming him in the 30 and then dropping him from the final 14 they were stirring divisive national sentiment?

However, despite these obvious and rather unpleasant differences, the uniquely fascinating thing about sport is that it does give the icon a chance to redeem himself against all odds. Agassi grabbed his chance against Baghdatis and scripted himself into history. It is now for Ganguly to score multiple tons in domestic cricket and prove that he is not a discard yet. That he has pledged to try is a trait that makes him different.

And with Ganguly, no less a miracle-man than Agassi, to guarantee that he will fail is a risk that the selectors led by More will also dare not take.

A Cue From Tendulkar