'The UPA government Has Unleashed Economic Terror On The Nation'

'The Prime Minister has desired to shed crocodile tears in the address to the nation. Instead of sermonising he should rather introspect on his ability to govern, must apologise to the nation and quit.' 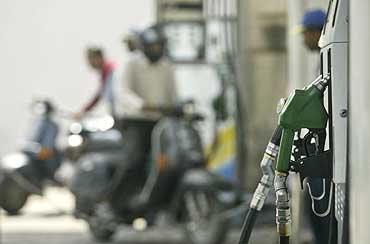 Press Statement issued by the National Spokesperson of the BJP

The decision of the Cabinet Committee chaired by the Prime Minister to jack the price of Petrol, Diesel and LPG is shocking. The UPA government has unleashed economic terror on the nation. Today’s decision defies all economic logic on the stated stand of the Prime Minister in last few months to check inflation. The Prime Minister who has been obviously hiding so far under the garb of economic growth stands completely exposed. The dysfunctional government and the Prime Minister has once again shown their true colours. They have messed up the country’s economy. Economy peril perpetrated and unleashed will obliterate the Congress claims of governance.

The earlier brazen declaration by the Prime Minister that Petrol, Diesel & LPG hike are inevitable shows that the government is obstinate and indifferent. The disdainful insensitivity exhibited to the "Aam Admi" will trigger mass unrest for which the UPA government will be solely responsible. The present economic apathy is the outcome of so called populist economic decisions coupled with incoherent policy initiatives in last four years of the UPA rule. The decision to hike the price of Petrol, Diesel & LPG unreservedly attests the betrayal of the Common man.

This action is disastrous for the economy and all the claims made by the Prime Minister so far on inflation have proved to be a hoax. The government which has run out of ideas has now unleashed this economic terror on the nation by increasing the price of petrol, diesel and cooking gas. This decision is the last straw for the UPA government. They have belied the interests which they have been championing.

The Prime Minister has desired to shed crocodile tears in the address to the nation this evening. Instead of sermonising he should rather introspect on his ability to govern, must apologise to the nation and quit. The Left have to equally apportion the blame of this sinister game played by the UPA government and in no way can absolve themselves. The country is fully aware of their hypocritical action and they stand completely exposed.

The National President of the Bharatiya Janata Party Sh. Rajnath Singh has announced that all district units across the country will hold protest demonstrations at respective district headquarters and submit a memorandum demanding immediate withdrawal of Petrol, Diesel and LPG price hike.