The Allahabad High Court rules by a majority verdict of 2-1 that the disputed land in Ayodhya be divided into three parts among Hindus (representing Ram Lalla), Sunni Waqf Board and Nirmohi Akhara, and orders status quo for the makeshift temple.

The following comparitive responses are culled, without any editing, from the 'gist of judgments' by the three judges at the Allahabad Hight Court website:

1. Whether the disputed site is the birth place of Bhagwan Ram?

Justice Sudhir Agarwal: The area covered under the central dome of the disputed structure is the birthplace of Lord Rama as per faith and belief of Hindus.

Justice Dharam Veer Sharma: The disputed site is the birth place of Lord Ram. Place of birth is a juristic person and is a deity. It is personified as the spirit of divine worshipped as birth place of Lord Rama as a child. Spirit of divine ever remains present every where at all times for any one to invoke at any shape or form in accordance with his own aspirations and it can be shapeless and formless also. 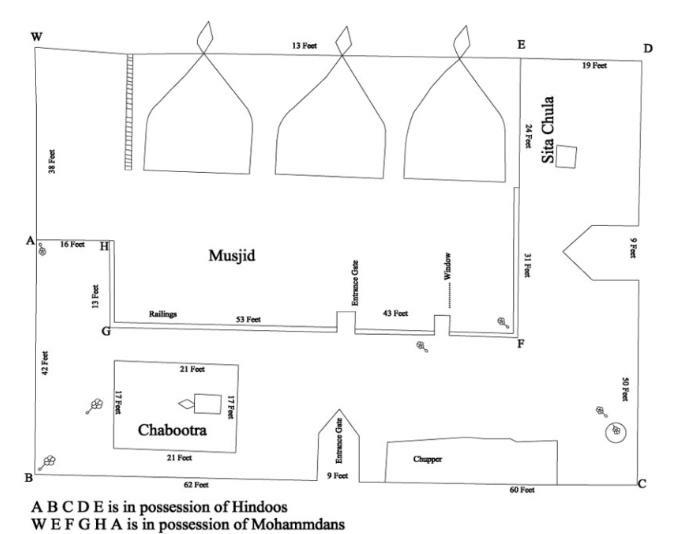 The map annexed along with the plaint of 1885

2. Whether the disputed building was a mosque? When was it built? By whom?

Justice Sibghat Ullah Khan: The disputed structure was constructed as mosque by or under orders of Babar. It is not proved by direct evidence that premises in dispute including constructed portion belonged to Babar or the person who constructed the mosque or under whose orders it was constructed. [M]uch before 1855 Ram Chabutra and Seeta Rasoi had come into existence and Hindus were worshipping in the same. It was very very unique and absolutely unprecedented situation that in side the boundary wall and compound of the mosque Hindu religious places were there which were actually being worshipped along with offerings of Namaz by Muslims in the mosque.

Justice Sudhir Agarwal: Disputed structure was always treated, considered and believed to be a mosque and practised by Mohammedans for worship accordingly. However, it has not been proved that it was built during the reign of Babar in 1528. In the absence of any otherwise pleadings and material it is difficult to hold as to when and by whom the disputed structure was constructed but this much is clear that the same was constructed before the visit of Joseph Tieffenthaler in Oudh area between 1766 to 1771.

Justice Dharam Veer Sharma: The disputed building was constructed by Babar, the year is not certain but it was built against the tenets of Islam. Thus, it cannot have the character of a mosque.

3. Whether the mosque was built after demolishing a Hindu temple?

Justice Sibghat Ullah Khan: No temple was demolished for constructing the mosque. Mosque was constructed over the ruins of temples which were lying in utter ruins since a very long time before the construction of mosque and some material thereof was used in construction of the mosque

Justice Sudhir Agarwal: The building in dispute was constructed after demolition of Non-Islamic religious structure, i.e., a Hindu temple.

Justice Dharam Veer Sharma: The disputed structure was constructed on the site of old structure after demolition of the same. The Archaeological Survey of India has proved that the structure was a massive Hindu religious structure.

Justice Sibghat Ullah Khan: Idol was placed for the first time beneath the Central dome of the mosque in the early hours of 23.12.1949.

Justice Sudhir Agarwal: The idols were kept under the central dome of the disputed structure in the night of 22nd/23rd December 1949.

Justice Dharam Veer Sharma: The idols were placed in the middle dome of the disputed structure in the intervening night of 22/23.12.1949.

5. Whether any of the claims for title is time barred?

Justice Dharam Veer Sharma: O.O.S. No. 4 of 1989, the Sunni Central Board of Waqfs U.P., Lucknow and others Vs. Gopal Singh Visharad and others and O.O.S. No.3 of 1989, Nirmohi Akhara and Another Vs. Sri Jamuna Prasad Singh and others are barred by time. 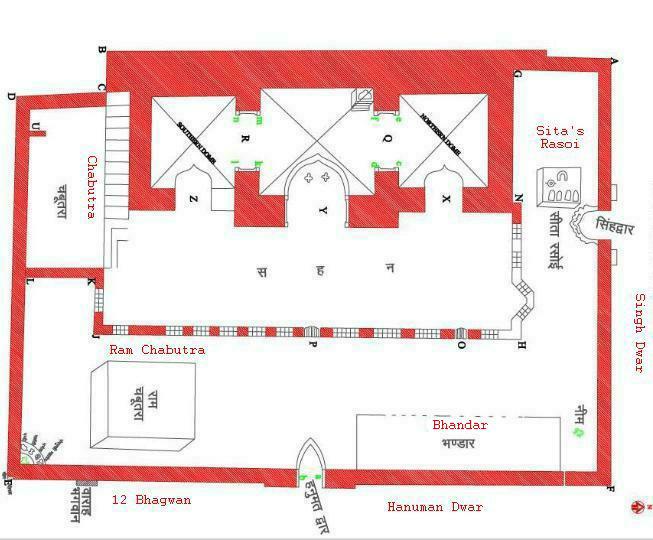 Based on Plan No 01, prepared by Shri Shiv Shankar Lal, pleader, COmmissioner, dated 25.05.50 in the court of the civil judge Faizabad regular suit No 2 of 1950/ Shri Gopal Chand Visharad V/s Zahur Ahmad and Others

6. What will be the status of the disputed site e.g. inner and outer courtyard?

Both the parties are declared to be joint title holders in possession of the entire premises in dispute and a preliminary decree to that effect is passed with the condition that at the time of actual partition by meets and bounds at the stage of preparation of final decree the portion beneath the Central dome where at present make sift temple stands will be allotted to
the share of the Hindus.

Accordingly, all the three sets of parties, i.e. Muslims, Hindus and Nirmohi Akhara are declared joint title holders of the property/ premises in dispute as described by letters A B C D E F in the map Plan-I prepared by Sri Shiv Shanker Lal, Pleader/ Commissioner appointed by Court in Suit No.1 to the extent of one third share each for using and managing the same for worshipping. A preliminary decree to this effect is passed.

However, it is further declared that the portion below the central dome where at present the idol is kept in makeshift temple will be allotted to Hindus in final decree.

It is further directed that Nirmohi Akhara will be allotted share including that part which is shown by the words Ram Chabutra and Sita Rasoi in the said map.

It is further clarified that even though all the three parties are declared to have one third share each, however if while allotting exact portions some minor adjustment in the share is to be made then the same will be made and the adversely affected party may be compensated by allotting some portion of the adjoining land which has been acquired by the Central Government.

The parties are at liberty to file their suggestions for actual partition by metes and bounds within three months.

List immediately after filing of any suggestion/ application for preparation of final decree after obtaining necessary instructions from Hon'ble the Chief Justice.

Status quo as prevailing till date pursuant to Supreme Court judgment of Ismail Farooqui (1994(6) Sec 360) in all its minutest details shall be maintained for a period of three months unless this order is modified or vacated earlier.

(i) It is declared that the area covered by the central dome of the three domed structure, i.e., the disputed structure being the deity of Bhagwan Ram Janamsthan and place of birth of Lord Rama as per faith and belief of the Hindus, belong to
plaintiffs (Suit-5) and shall not be obstructed or interfered in any manner by the defendants. This area is shown by letters AA BB CC DD is Appendix 7 to this judgment.

(ii) The area within the inner courtyard denoted by letters B C D L K J H G in Appendix 7 (excluding (i) above) belong to members of both the communities, i.e., Hindus (here plaintiffs, Suit-5) and Muslims since it was being used by both since
decades and centuries. It is, however, made clear that for the purpose of share of plaintiffs, Suit-5 under this direction the area which is covered by (i) above shall also be included.

(iii) The area covered by the structures, namely, Ram Chabutra, (EE FF GG HH in Appendix 7) Sita Rasoi (MM NN OO PP in Appendix 7) and Bhandar (II JJ KK LL in Appendix 7) in the outer courtyard is declared in the share of Nirmohi Akhara (defendant no. 3) and they shall be entitled to possession thereof in the absence of any person with better title.

(iv) The open area within the outer courtyard (A G H J K L E F in Appendix 7) (except that covered by (iii) above) shall be shared by Nirmohi Akhara (defendant no. 3) and plaintiffs (Suit-5) since it has been generally used by the Hindu people
for worship at both places.

(iv-a) It is however made clear that the share of muslim parties shall not be less than one third (1/3) of the total area of the premises and if necessary it may be given some area of outer courtyard. It is also made clear that while making partition by metes and bounds, if some minor adjustments are to be made with respect to the share of different parties, the affected party may be compensated by allotting the requisite land from the area which is under acquisition of the Government of India.

(v) The land which is available with the Government of India acquired under Ayodhya Act 1993 for providing it to the parties who are successful in the suit for better enjoyment of the property shall be made available to the above concerned parties in such manner so that all the three parties may utilise the area to which they are entitled to, by having separate entry for egress and ingress of the people without disturbing each others rights. For this purpose the concerned parties may approach
the Government of India who shall act in accordance with the above directions and also as contained in the judgement of Apex Court in Dr. Ismail Farooqi (Supra).

(vi) A decree, partly preliminary and partly final, to the effect as said above (i to v) is passed. Suit-5 is decreed in part to the above extent. The parties are at liberty to file their suggestions for actual partition of the property in dispute in the manner as directed above by metes and bounds by submitting an application to this effect to the Officer on Special Duty, Ayodhya Bench at Lucknow or the Registrar, Lucknow Bench, Lucknow, as the case may be.

(vii) For a period of three months or unless directed otherwise, whichever is earlier, the parties shall maintain status quo as on today in respect of property in dispute.

In addition, there were the following two writ petitions before the judges:

The gist of judgments by the three judges -- Sibghat Ullah Khan, Sudhir Agarwal, Dharam Veer Sharma -- of the Allahabad Hight Court, from which the above was compiled