Not having learnt from Afghanistan and Iraq, the US now plans for a political paradrop of a neo Benazir Bhutto into Pakistan in the hope of providing badly-needed oxygen to President General Pervez Musharraf 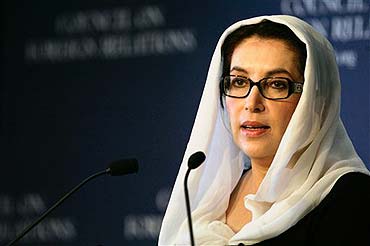 The much talked about US plans for a political paradrop of a neo Benazir Bhutto into Pakistan in the hope of providing badly-needed oxygen to President General Pervez Musharraf and saving the country from Al Qaeda, the Neo Taliban and an assortment of other pro-Al Qaeda and anti-US jihadi terrorist groups is likely to create a third mess in a row for the US after the earlier two in Afghanistan and Iraq.

All the reports from a variety of sources in Pakistan are clear on one point--there is widespread anti-Americanism in the general public. This is not confined to the fundamentalist and jihadi parties. It is widely shared right across the country.

One of the reasons for the growing unpopularity of Musharraf is the public perception of him as a collaborator of the US in its so-called war against jihadi terrorism, which is viewed as a war against Islam. Outside the tribal areas, the Pakistani people are by and large moderate. They are unhappy over the role of the fundamentalists and the jihadis in hampering the modernisation of the country and in retarding its economic development. But they are equally unhappy over the perceived role of the US in influencing, if not dictating, not only the foreign, but also the domestic policy of the country.

Any leader--whether it be the Neo Benazir or anyone else--who seeks to regain power with the support of the US with promises to co-operate with the US more effectively than at present in the so-called war against jihadi terrorism is unlikely to have much credibility in the eyes of the people.

Moreover, anyone even with rudimentary knowledge of Pakistan would know that Benazir, like Musharraf, is an opportunist par excellence. Both have more broken than kept promises in the past. Both have betrayed more political allies than those they stood by. Look at the way the Neo Benazir let down Mr Nawaz Sharif and his Pakistan Muslim League (PML) in her anxiety to come to power. Look at the way Musharraf is apparently prepared to ditch the PML (Qaide Azam), whose formation was engineered by him in 2002 in order to have himself elected as the President, in order to get her support for his re-election.

Benazir and Musharraf were birds of the same feather in the past. Remember how she, as the Prime Minister in her first term (1988-90) asked the Inter-Services Intelligence to start terrorism in India's Jammu and Kashmir in 1989? She, Maj.Gen.Naseerullah Babar, her Interior Minister during her second term (1993-96), and Musharraf, then the Director-General of Military Operations (DMO), were the joint creators of the Taliban and facilitated its capture of Kabul in September, 1996. It was she, who allowed Osama bin Laden, to shift from Khartoum to Jalalabad in 1996, thereby paving the way for the creation of Al Qaeda's infrastructure in Afghan territory. She was as responsible as Musharraf for the rogue activities of Dr A.Q.Khan and other nuclear scientists. Pakistan's clandestine nuclear co-operation with Iran and Libya, started under Zia-ul-Haq, made headway under her and its clandestine nuclear and missile co-operation with North Korea started during her second tenure .

Musharraf has not kept up his promises to co-operate sincerely with the US in neutralising Al Qaeda activities from Pakistani territory. He has avoided action against the operations of the Neo Taliban in Afghan territory from its sanctuaries in Pakistani territory. Not having learnt any lessons from its pathetic faith in Musharraf, which has not produced results, the US is banking on Benazir's promise of strong action against the extremists and terrorists if the US supports her return to power. It seems to believe that Musharraf and Benazir acting together could save Pakistan and its nuclear arsenal from falling into the hands of the jihadi terrorists.

To expect that two opportunists such as Musharraf and Benazir, known for their insincerity, would now mend their ways and work jointly against terrorists is to live in a fools' paradise. Musharraf wants desperately to continue in power to save himself from ignominy. He believes, rightly or wrongly, that he would need the support of the US for this. She wants desperately to return to power, to have the corruption cases against her closed and to let her husband Asif Zirdari make more money as if the millions, if not billions, made by him during her first two tenures are not adequate. She feels she can do so only with US support.

Sections of the US media have quoted US officials as justifying the proposed Musharraf-Benazir patch-up as the best of the bad options available. So they said, when they gave unqualified backing to Musharraf post 9/11. So they are saying now.

US calculations of political stability in Pakistan under such a patch-up may be belied. Benazir of today is not the Benazir of 1988. She came to power in 1988 through her own efforts with the support of the people of Sindh and southern and central Punjab. The voters rejected the PML of Nawaz Sharif, which they saw as the creation of the Army and the ISI. She made a deal with the US after winning the elections in order to make the Army drop its objections to her becoming the Prime Minister.

Today, the Neo Benazir, who denounced Nawaz and his PML in 1988 as the stooges of the Army and the ISI, is seeking the benediction of the US even before winning the elections and the support of Musharraf and his Army for her return to power and the closing of the corruption cases against her and her husband.

Even if the US-engineered patch-up ultimately materialises and she returns to contest the elections, the victory of her party will be uncertain. The elections will be seen as between the collaborators of the Army and the US on the one side and their opponents on the other. The opponents will have a decided advantage in view of the prevailing anti-Army and anti-US atmosphere. Moreover, she and her party could face difficulties even in Sindh in view of the expected strong showing of the Muttahida Qaumi Movement (MQM) of Mr.Altaf Hussain.

Pakistan and its nuclear arsenal need to be protected from the hands of Al Qaeda and other jihadi terrorists. Nobody can find fault with the over-all US objective, but it has been going about it in the wrong way. It should have allowed genuine democracy to take its own course, even at the risk of political forces not well disposed towards the US coming to power. Instead, by giving the impression of taking sides even before the elections and by making its ill-advised preferences known before the elections, it has given rise to the strong possibility of more instability, and not less but more terrorism. Even if Benazir comes to power in an election rigged by the Army, she will be seen as Pakistan's Hamid Karzai, who came to power not by the will of the people, but by riding on the shoulders of the US.