The Suicide Armada In Afghanistan

Strategically, the Neo-Taliban's conventional battles have been more significant, but tactically, its repeated acts of suicide terrorism result in new recruits and aids its PSYWAR against the Karzai government. 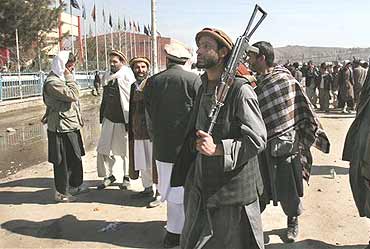 Two Americans, one South Korean and 20 Afghans were killed on the morning of February 27, 2007, when a lone suicide bomber blew himself up outside the outer perimeter gate of the air base at Bagram, 50 kms from Kabul. The air base is now used by the some of the US forces operating in Afghanistan. It is like the Green Zone of Baghdad, assessed to be very secure for American personnel. Even in the past, there had been terrorist strikes in the neighbourhood of the base, but not in the base itself.

Vice-President Dick Cheney of the US was staying in a special guest house complex inside the base at the time of the blast. He was getting ready to fly to Kabul to meet President Hamid Karzai after taking breakfast with the American troops inside the base before flying out to Oman. Cheney had arrived in Bagram the previous day and was to fly out the same day after meeting Karzai. However, he could not do so due to heavy snow and had to make an unscheduled over-night halt.

After the blast, a spokesman of the Neo Taliban claimed that the suicide bomber belonged to the Taliban and that his target was Cheney. There was no danger to the security of Cheney at any time and there was no breach of security in the base itself. The terrorist could not penetrate into the sanitised area from which the American forces take over the responsibility for the security of the base and its inmates. There is no reason to believe that it was a pre-planned attack to kill Cheney. It was one of those suicide attacks, which have been taking place all over Southern and Eastern Afghanistan for more than a year with increasing frequency. Since Cheney happened to be present in Bagram at the time of the incident, the Neo Taliban has tried to take advantage of it for PSYWAR purposes by connecting it with Cheney's presence.

There were 139 acts of suicide terrorism in Afghanistan during 2006 for which the Neo Taliban claimed responsibility. 520 foreign soldiers—356 of them Americans— have been killed since the US forces started their operations against Al Qaeda and the Taliban in Afghanistan on October 7, 2001. Of the remaining, 46 were British, 44 were Canadians, 19 were Spanish, 18 were Germans and the rest were from other nations. Of these 520 deaths, 170 were reported last year—the largest number in a single year. Only 17 of these foreign soldiers died due to suicide terrorism last year. The remaining 150 died in conventional battles and in other incidents not involving suicide terrorism. The majority of the victims of suicide terrorism were Afghans. A total of 170 civilians as well as members of the Afghan security forces and other public servants were killed by suicide terrorists last year. As against this, the deaths of Afghans in conventional battles last year amounted to 3,730.There have been 21 acts of suicide terrorism this year, including the latest one outside the Bagram air base.

Strategically, the conventional set-piece battles being fought by the Neo Taliban have been more significant than its acts of suicide terrorism. But, tactically, its repeated acts of suicide terrorism have been more helpful in its recruitment of new volunteers in Afghanistan and Pakistan and in its PSYWAR against the Hamid Karzai government. Acts of suicide terrorism, even if not strategically significant, are more spectacular than conventional battles and have an important inspirational role. While continuing to prepare themselves for more conventional battles, the Neo Taliban and its allies such as Al Qaeda and Gulbuddin Heckmatyar's Hizbe Islami are trying to step up suicide attacks not only in Southern and Eastern Afghanistan, but also in areas near the capital. It is easier to infiltrate a lone suicide bomber into the areas in and around the capital than conventional fighting formations. One should, therefore, be prepared for more suicide terrorism in Kabul itself and its neighbourhood.

The Hamid Karzai government has been alleging that many of the suicide terrorists are being recruited, motivated and trained in Pakistan and then sent into Afghanistan. There is strong evidence in support of this. But evidence is weak on their background—how many of them are Afghans recruited in the Afghan refugee camps of the 1980s vintage, which still function in Pakistani territory? How many are Pakistani nationals recruited in Balochistan and the North-West Frontier Province (NWFP)? How many are Afghan and Pakistani tribals recruited in the Federally-Administered Tribal areas (FATA)? How many are Arabs and other foreigners? There is more speculation than quantifiable evidence on these questions. The suicide armada of the Neo Taliban has a mix of three kinds of volunteers/recruits— those who are ideologically motivated; those who are individually motivated due to anger against the Americans and others for killing their relatives in air strikes and other military operations; and those who are mercenaries. The mercenaries come from poor families, who join in return for the Neo Taliban's promise to look after their families if they martyr themselves.

A coherent strategy to deal with the mix of conventional skills and suicide terrorism being exhibited by the Neo Taliban since the beginning of 2006 is lacking. Action against conventional units and capability requires better human and technical intelligence. Action against suicide terrorism requires better access control and better physical security. All the three have serious deficiencies — intelligence capability, access control and physical security. These deficiencies are partly due to the inadequacies of the security set-up of the Karzai government and partly due to the failure of the US intelligence agencies. The dilemma faced by Gen.Pervez Musharraf can also be partly attributed to the poor intelligence from the US. Between 2002 and 2005 there were some spectacular successes leading to the arrest of important Al Qaeda operatives in the urban areas (Faislabad, Karachi, Rawalpindi etc) mainly due to precise intelligence from the US. There were some public relations disasters since the beginning of last year due to inaccurate intelligence from the US which led to a large number of civilian casualties in Pakistani air strikes in the Bajaur agency and South Waziristan. Such incidents are driving more people to take to suicide terrorism, even if they are not ideologically close to the Neo Taliban and Al Qaeda. The US intelligence agencies have been accurate in urban areas where the terrorists use modern means of communications. They have been groping in the dark in the tribal areas where the terrorists don't use them.

The absence of a coherent strategy can also be partly attributed to the practice of rotating the responsibility for command and control among senior officers of various countries, which have sent their forces. Every new Commanding Officer comes with his own pet ideas of counter-terrorism and adds to the incoherence. There has been no attempt to evolve a comprehensive counter-terrorism strategy which would encompass the various components such as action against conventional units, action against suicide terrorism, improvement of intelligence collection, anti-narcotics control, promotion of genuine democracy not only in Afghanistan, but also in Pakistan, PSYWAR etc. This has to be a top priority with the involvement of more civilian experts in counter-terrorism. The counter-terrorism campaigns in Iraq as well as Afghanistan have been largely under the control of the military officers, who have not been able to infuse a non-military civilian perspective into it. Their emphasis has been more on guns than butter, more on military than ideological tactics.

In addition to exercising pressure on Musharraf to deliver, the US should also undertake a comprehensive review of its strategy in Afghanistan by a special study group to consist more of professionals than of political leaders. In the Iraq Study Group constituted by the Congress, the political perspective prevailed over the professional. This has to be prevented.

"You And I And The Next War"