Reagan's duty was to smile, to read from the teleprompter in a pleasant voice, tell a few jokes, and keep the audience properly bemused. 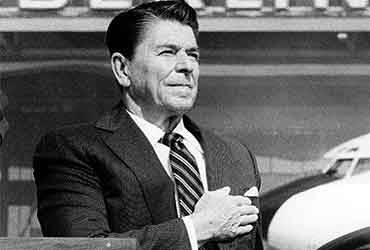 With regard to the political system, the Reagan era represents a significant advance in capitalist democracy. For eight years, the U.S. government functioned virtually without a chief executive. That is an important fact. It is quite unfair to assign to Ronald Reagan, the person, much responsibility for the policies enacted in his name. Despite the efforts of the educated classes to invest the proceedings with the required dignity, it was hardly a secret that Reagan had only the vaguest conception of the policies of his administration, and if not properly programmed by his staff, regularly produced statements that would have been an embarrassment, were anyone to have taken them seriously. The question that dominated the Iran-contra hearings -- did Reagan know, or remember, what the policy of his administration had been? -- was hardly a serious one. The pretense to the contrary was simply part of the cover-up operation; and the lack of public interest over revelations that Reagan was engaged in illegal aid to the contras during a period when, he later informed Congress, he knew nothing about it, betrays a certain realism.

Reagan's duty was to smile, to read from the teleprompter in a pleasant voice, tell a few jokes, and keep the audience properly bemused. His only qualification for the presidency was that he knew how to read the lines written for him by the rich folk, who pay well for the service. Reagan had been doing that for years.

He seemed to perform to the satisfaction of the paymasters, and to enjoy the experience. By all accounts, he spent many pleasant days enjoying the pomp and trappings of power and should have a fine time in the retirement quarters that his grateful benefactors have prepared for him. It is not really his business if the bosses left mounds of mutilated corpses in death squad dumping grounds in El Salvador or hundreds of thousands of homeless in the streets. One does not blame an actor for the content of the words that come from his mouth. When we speak of the policies of the Reagan administration, then, we are not referring to the figure set up to front for them by an administration whose major strength was in public relations. The construction of a symbolic figure by the PR industry is a contribution to solving one of the critical problems that must be faced in any society that combines concentrated power with formal mechanisms that in theory allow the general public to take part in running their own affairs, thus posing a threat to privilege.

Not only in the subject domains but at home as well, there are unimportant people who must be taught to submit with due humility, and the crafting of a figure larger than life is a classic device to achieve this end. As far back as Herodotus we can read how people who had struggled to gain their freedom "became once more subject to autocratic government" through the acts of able and ambitious leaders who "introduced for the first time the ceremonial of royalty," distancing the leader from the public while creating a legend that "he was a being of a different order from mere men" who must be shrouded in mystery, and leaving the secrets of government, which are not the affair of the vulgar, to those entitled to manage them. In the early years of the Republic, an absurd George Washington cult was contrived as part of the effort "to cultivate the ideological loyalties of the citizenry" and thus create a sense of "viable nationhood," historian Lawrence Friedman comments. Washington was a "perfect man" of "unparalleled perfection," who was raised "above the level of mankind," and so on. To this day, the Founding Fathers remain "those pure geniuses of detached contemplation," far surpassing ordinary mortals (see p. 00). Such reverence persists, notably in elite intellectual circles, the comedy of Camelot being an example. Sometimes a foreign leader ascends to the same semi-divinity among loyal worshippers, and may be described as "a Promethean figure" with "colossal external strength" and "colossal powers," as in the more ludicrous moments of the Stalin era, or in the accolade to Israeli Prime Minister Golda Meir by New Republic owner-editor Martin Peretz, from which these quotes are taken.

Franklin Delano Roosevelt attained similar heights among large sectors of the population, including many of the poor and working class, who placed their trust in him. The aura of sanctity remains among intellectuals who worship at the shrine. Reviewing a laudatory book on FDR by Joseph Alsop in the New York Review of Books, left-liberal social critic Murray Kempton describes the "majesty" of Roosevelt's smile as "he beamed from those great heights that lie beyond the taking of offense... Those of us who were born to circumstances less assured tend to think of, indeed revere, this demeanor as the aristocratic style... [We are] as homesick as Alsop for a time when America was ruled by gentlemen and ladies." Roosevelt and Lucy Mercer "were persons even grander on the domestic stage than they would end up being on the cosmic one," and met the great crisis in their lives, a secret love affair, "in the grandest style." "That Roosevelt was the democrat that great gentlemen always are in no way abated his grandeur... [His blend of elegance with compassion] adds up to true majesty." He left us with "nostalgia" that is "aching." His "enormous bulk" stands between us "and all prior history...endearingly exalted...splendidly eternal for romance," etc., etc. Roosevelt took such complete command that he "left social inquiry...a wasteland," so much so that "ten years went by before a Commerce Department economist grew curious about the distribution of income and was surprised to discover that its inequality had persisted almost unchanged from Hoover, through Roosevelt and Truman..." But that is only the carping of trivial minds. The important fact is that Roosevelt brought us "comfort...owing to his engraving upon the public consciousness the sense that men were indeed equal," whatever the record of economic reform and civil rights may show. There was one published reaction, by Noel Annan, who praised "the encomium that Murray Kempton justly bestowed on Roosevelt." Try as they might, the spinners of fantasy could not even approach such heights in the Reagan era.

The political and social history of Western democracies records all sorts of efforts to ensure that the formal mechanisms are little more than wheels spinning idly. The goal is to eliminate public meddling in formation of policy. That has been largely achieved in the United States, where there is little in the way of political organizations, functioning unions, media independent of the corporate oligopoly, or other popular structures that might offer people means to gain information, clarify and develop their ideas, put them forth in the political arena, and work to realize them. As long as each individual is facing the TV tube alone, formal freedom poses no threat to privilege.

One major step towards barring the annoying public from serious affairs is to reduce elections to the choice of symbolic figures, like the flag, or the Queen of England -- who, after all, opens Parliament by reading the government's political program, though no one asks whether she believes it, or even understands it. If elections become a matter of selecting the Queen for the next four years, then we will have come a long way towards resolving the tension inherent in a free society in which power over investment and other crucial decisions -- hence the political and ideological systems as well -- is highly concentrated in private hands.

For such measures of deterring democracy to succeed, the indoctrination system must perform its tasks properly, investing the leader with majesty and authority and manufacturing the illusions necessary to keep the public in thrall -- or at least, otherwise occupied. In the modern era, one way to approach the task is to rhapsodize (or wail) over the astonishing popularity of the august figure selected to preside from afar. From the early days of the Reagan period it was repeatedly demonstrated that the tales of Reagan's unprecedented popularity, endlessly retailed by the media, were fraudulent. His popularity scarcely deviated from the norm, ranging from about 1/3 to 2/3, never reaching the levels of Kennedy or Eisenhower and largely predictable, as is standard, from perceptions of the direction of the economy. George Bush was one of the most unpopular candidates ever to assume the presidency, to judge by polls during the campaign; after three weeks in office his personal approval rating was 76 percent, well above the highest rating that Reagan ever achieved. Eighteen months after taking office, Bush's personal popularity remained above the highest point that Reagan achieved. Reagan's quick disappearance once his job was done should surprise no one who attended to the role he was assigned.

It is, nonetheless, important to bear in mind that while the substance of democracy was successfully reduced during the Reagan era, still the public remained substantially out of control, raising serious problems for the exercise of power.

Nouns That Should Be Acronyms