A recent worldwide poll found that not only was the attitude generally positive but there was more enthusiasm for foreign trade and investment in developing countries than in rich ones. But institutions and policies are needed to deliver the hoped fo

WASHINGTON:  A recent worldwide poll may have come as a shock to those who view the anti-globalization demonstrations as emblematic of a general souring mood about global economic integration. The Pew survey found that not only was the attitude generally positive but there was more enthusiasm for foreign trade and investment in developing countries than in rich ones.

A close look at the economies of those countries shows why: the fast-growing economies in the world in this era of globalization are developing countries that are aggressively integrating with the world economy. However, the survey also found common anxieties around the world that protesters often highlight but a majority of the polled did not blame economic integration for it. It is increasingly clear that while this integration brings benefits, it also requires complementary institutions and policies in order to enhance the gains and cushion some of the risks of greater openness.

The Pew Center for the People and the Press surveyed 38,000 people in 44 nations, with excellent coverage of the developing world in all regions. In general, there is a positive view of growing economic integration worldwide. But what was striking in the survey is that views of globalization are distinctly more positive in low-income countries than in rich ones. 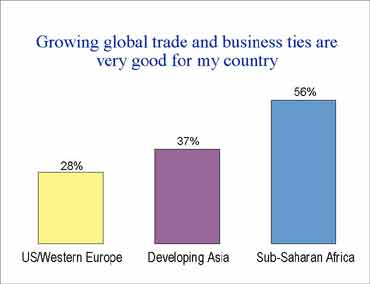 While most people worldwide viewed growing global trade and business ties as good for their country, only 28% of people in the U.S. and Western Europe thought that such integration was "very good." In Vietnam and Uganda, in contrast, the figures for "very good" stood at 56% and 64%, respectively. Although these countries were particularly pro-globalization, developing Asia (37%) and Sub-Saharan Africa (56%) were far more likely to find integration "very good," than industrialized countries. Conversely, a significant minority (27% of households) in rich countries thought that "globalization has a bad effect on my country," compared to negligible numbers of households with that view in developing Asia (9%) or Sub-Saharan Africa (10%). 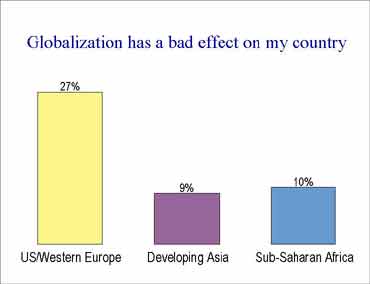 Developing nations also had a more positive view of the institutions of globalization. In Sub-Saharan Africa 75% of households thought that multinational corporations had a positive influence on their country, compared to only 54% in rich countries. Views of the effects of the WTO, World Bank, and IMF on their country were nearly as positive in Africa (72%). On the other hand, only 28% of respondents in Africa thought that anti-globalization protestors had a positive effect on their country. Protesters were viewed more positively in the U.S. and West Europe (35%).

This Pew attitudes survey is consistent with the findings from World Bank and other research on globalization. In general, the developing countries that have increased their participation in trade and attracted foreign investment have accelerated growth and reduced poverty. Uganda and Vietnam are two of the best examples, so it is not surprising that integration is viewed positively there. More generally, globalizing developing countries are growing significantly faster than rich ones. In a paper for the World Bank , "Trade, Growth, and Poverty," Aart Kraay and I define the top third of developing countries in terms of trade integration as the "more globalized" countries. This group has seen an acceleration of its per capita growth rate, reaching a population-weighted average of 5% annually in the 1990s. By contrast, rich countries grew at 2%, and the rest of the developing world, at - 1%. Over 3 billion people are included, for Bangladesh China, India, Brazil, and Mexico are part of this category.

The anti-globalization movement often claims that integration leads to growing inequality within countries, with no benefits going to the poor. Generally, this is not true. There are certainly some countries in which inequality has risen, like China and the U.S., but there is no worldwide trend. Most important, in the developing countries that are growing well as a result of integration and other reforms, rapid growth translates into rapid poverty reduction. The total number of extreme poor (living on less than $1 per day measured at purchasing power parity) increased throughout history up to about 1980. Since 1980 that number declined by 200 million, while world population increased by 1.8 billion. The progress is heartening, but there are still 1.2 billion people living in poverty 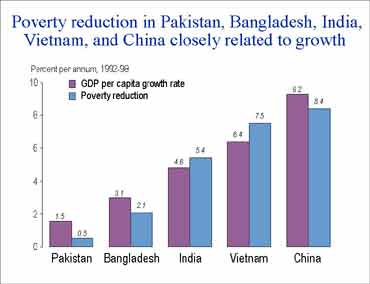 Notwithstanding the positive views of globalization in the developing world, the survey shows that there are common anxieties around the world concerning the availability of good jobs, job insecurity, old age support, and other quality of life issues. Interestingly, people tend not to blame globalization for lack of progress in these areas, but rather poor governance in their own countries. World Bank research shows that openness to trade alone is not going to have much impact if that openness is not complemented by other factors like a sound investment climate - meaning the environment of regulation, infrastructure, and financial services - and effective provision of basic services, especially for the poor.

Investment climate surveys have been completed recently in Bangladesh, China, India, and Pakistan. The surveys covered firms in tradable sectors such as garments, textiles, electronics, pharmaceuticals, etc. The surveyed firms had an average of 75 workers. For such firms, weaknesses in governance and infrastructure services are among the main problems that hold back productivity and growth. For example, reliability on power supply is a big issue in all of the South Asian countries. In our China sample, firms estimate losing 2% of sales to power outages, compared to 3.3% in Bangladesh and 5.4% in Pakistan.

On many of these regulatory and infrastructure issues, China looks quite good compared to other developing countries. For example, how long does it take a firm to get its last shipment of materials through customs. Firms in garments and electronics that are trying to compete on the world market typically import materials on a regular basis, making customs efficiency very important. Firms in China were able to get their most recent shipment of imported materials through customs in 7 days, compared to 11 days in India, 12 in Bangladesh, and 17 in Pakistan. Such delays result in firms having to hold higher inventories and are therefore less reliable suppliers on the international market. Another good investment climate indicator is how many days it takes to get a telephone line The wait varies from 16 days in China, to 42 in Pakistan, to a whopping 130 days in Bangladesh. Though not the only factor, good investment climate has allowed countries to benefit greatly from globalization, creating jobs and rapidly reducing poverty.

In summary, globalization can support poverty reduction, but it requires international and national actions - including enhanced market access for developing countries, improved investment climates, and effective delivery of health and education.

David Dollar is Director of Development Policy, World Bank. The views expressed are those of the author and do not necessarily represent official views of the World Bank or its member countries. Rights: YaleGlobal Online © 2003 Yale Center for the Study of Globalization.

More Than A Storm In The Tea Cup