"The Poor Can Buy Barbie Dolls"

How elite India, oblivious to the hunger and destitution but enthralled by the junk that can now be imported, is fooling the country about the reason and impact of lifting QRs. 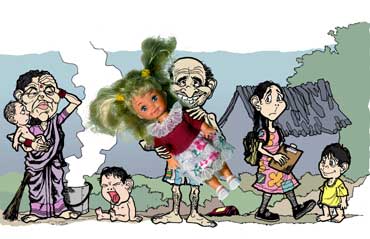 outlookindia.com
-0001-11-30T00:00:00+0553
When the French peasantry was reeling under a severe famine and Marie-Antoinette was told that they had no bread to eat, she nonchalantly said, "If there is no bread, let them eat cake".

When thousands of our farmers are committing suicide, when millions of our women and children are facing hunger and starvation, a leading economist said, "The poor can buy Barbie dolls". This statement was made when I was on a T.V. panel with him to discuss and debate the impact of the removal of import restrictions (Quantitative Restrictions or QRs)

We were discussing the disastrous impacts of free flow of products into Indian markets on small scale producers and farmers. A video clip had been shown of the 100,000 lock makers in Aligarh whose units were being shut down as cheap locks from China were flooding our markets. Import of agricultural commodities like edible oils have already destabilised the agricultural economy and with 147 more agricultural items removed from the restricted list, other sectors will be hit.

The removal of QRs has been celebrated by the media as a consumers bonanza. Sample some of the headlines - "Johnie Walker, fine wines in 2 weeks", "The consumer bonanza", "The Indian consumer has finally been crowned king" - "The brands India will be wearing -- Overcoats: Dolce & Gabbana, Scarves: Hermes, Belts: Calvin Klein, Skirts: Margaretha Ley Escada, Pullovers: Chloe, Diamond Necklaces: Van Clef and Arpels".

The diamond laden lady is not the typical Indian consumer. Most Indian consumers are already consuming less than their basic needs required, as livelihoods are destroyed, incomes disappear and purchasing power evaporates. Cereal consumption has declined by 12% in rural India during a decade of reforms. As imports further destroy livelihoods, especially of the poor, their consumption levels will further fall. No one is addressing the declining consumption of the poor as imported goods drive out domestic production and livelihoods. And when the issue of survival of the poor was raised, our worthy economist stated seriously, "the poor can buy Barbie Dolls".

It is this mindset of elite India blind to the growing hunger and destitution of the people of this country, but enthralled by the junk that can now be imported, which is fooling the country about the reason and impact of lifting QRs. Among the unrestricted imports are carcasses of sheep and goats, offal (animal waste parts) of chicken, sheep, turkeys, ducks, geese, rabbits, hares, swine.

We have opened up our markets to meat imports when Europe is in crisis because of Mad Cow Disease and the Foot and Mouth Disease. More than 500,000 animals are being killed and burned.

The U.S. Centre for Disease and Prevention (CDC) in Atlanta has calculated that nearly 81 million cases of food-borne illnesses occurs in the US every year. Deaths from food poisoning have more than quadrupled due to deregulation, rising from 2000 in 1984 to 9,000 in 1994. Most of these infections are caused by factory-farmed meat. CDC estimates there are nearly 20,000 cases of poisoning by the mutant E. Coli 0157.H7. This mutant bacterium was unknown before 1982 and contamination of meat by E. Coli 0157.H7 results from sloppy high-speed slaughter and processing industry.

The so called Hazard Analysis Critical points (HACCP) is in reality a Trojan Horse for deregulation which has resulted in removing 1400 food inspectors, leaving food safety in the hands of the factory-farming industry which produces food hazards in its rush to slaughter more animals faster. A few high-speed slaughter operations have driven out thousands of small packers out of business.

Fewer employees were slaughtering more animals and the worker turnover rate in high-speed plants is nearly 100 per cent per year according to the United Food and Commercial International Union. Workers in America’s slaughterhouses call working in the meat industry worse than slavery.

Factory farms and slaughter houses are prisons for animals and humans. Article XX of the GATT allows the exemption of WTO rules relating to prison labour (Article XX (e)). On grounds related to products of prison labour the removal of restrictions on imports from the US should be immediately stopped.

The Government’s announcement that the Prevention of Food Adulteration Act will be used to ensure "Biosecurity" under free import conditions is far from reassuring. PFA is an outmoded food law, designed before the age of Mad Cows, prions and GMOs. The Government has so far failed to pass a law drafted by the Social Welfare Ministry for labelling of vegetarian and non-vegetarian content in food items. It has not shown the will to protect public health or the citizens' right to know. It cannot guarantee food safety in the face of imports through the instruments it has offered. The "Licence Raj" has not ended. Our public health is being put in the hands of corrupt inspectors who will give licenses for the import of the most hazardous food stuffs without blinking an eyelid. Art XX allows for bans on imports and this is the route that should be used for agricultural products that carry risks for animal or human health.

The Government has also announced that it will import sensitive items through State Trading Agencies. However, soya oil and palm oil which are already flooding our markets are not on the list of canalised imports. Further, while the bound rate for tariffs on edible oil imports is 300%, the government has kept the tariff for soya oil abnormally low at 45%. This benefits not the Indian farmer, but the seed giant Monsanto and the grain giant Cargill.

The announcement of a "war room" might reassure some people. But such militaristic metaphors could only emerge from thinking which sees economics and trade as war. Tragically, the EXIM policy has declared a war against the hardworking people of India, but the "war room" will fail to see the victims of this war, as millions are pushed into hunger and destitution. The problem with the free trade logic is that it puts trade above people's lives and shifts government focus from the welfare of people to the promotion of exports and imports. The EXIM policy makes this singular focus that neglects people but protects trade very evident. The economy of a billion people is being destroyed with a pathetic target exports by 2005, accounting for 1% of global trade.

In any case, the rush to remove QRs is not justified. India’s trading partners had accepted the deadline of 2003. Only the U.S. had called for removal of QRs by 2001. In Oct 1997, the United States initiated action at the WTO Dispute Settlement Body ("DSB") to establish a Panel to examine this dispute. In its request, the United States considered that quantitative restrictions maintained by India including, but not limited to, the more than 2,700 agricultural and industrial product tariff lines notified to the WTO in Annex I, Part B of WT/BOP/N/24 dated 22 May 1997, appeared to be inconsistent with India’s obligations under Articles XI:1 and XVIII:11 of GATT 1994 and Article 4.2 of the Agreement on Agriculture. Furthermore, its contention was that the import licensing procedures and practices of the Government of India were inconsistent with fundamental WTO requirements as provided in Article XIII of GATT 1994 and Article 3 of the Agreement of Import Licensing Procedures.

The DSB established the Panel on 18 November, 1997, with the following terms of reference:

In other words, the US demanded a much shorter phase-out period for the removal of Quantitative Restrictions.

In April 1999, the WTO Panel ruled in favour of the US. The Panel chose to only take in to account the IMF position that India’s balance-of-payments situation was not such as to allow maintenance of measures such as QRs for BOP purposes and therefore India was not justified in maintaining its existing measures on the pretext of BOP problems.

The Government of India at this stage did not raise any arguments by way of exerting its rights as a founding member of the WTO, premised on the probable recurrence of BOP problems due to increase in imports.

The Panel asked the parties to negotiate a new implementation/phase-out period. The Panel also recommended that DSB ask India to bring the measures at issue into conformity with its obligations under the WTO Agreement.

In May 1999, India notified the DSB of its decision to appeal against certain issues of law in the Panel Report and filed a notice of Appeal with the WTO Appellate Body.

In August 1999, the Appellate Body rejected India’s appeal. Among other things the Appellate Body upheld the Panel’s finding that it was competent to review the justification of India’s balance-of-payments restrictions under Article XVIII:B of the GATT 1994.

In September 1999, the Indian Government indicated to the US that it required more than the normal 15-month period to remove QRs. However, the latter did not agree to this time schedule, though all other trading partners did.

In December 1999, by the exchange of letters between two trade bureaucrats, Susan Esserman of the US Commerce Department and N.N. Khanna of the Indian Ministry of Commerce, an agreement between the two governments was executed to the effect that:

(a) on or before April 1, 2000 India may notify to the United States a listing of up to but no more than 715 items of the 1,429 items on which India currently maintains quantitative restrictions, and with respect to the up-to-715 items so notified, the reasonable period of time shall expire on April 1, 2001 and

(b) with respect in all the other items, the reasonable period of time shall expire on April 1, 2000.

This agreement in effect drastically shortened the phase-out period to 2001 by which date all QRs on 1,429 items would be lifted. This is despite the fact that the European Union and other countries had agreed to a phasing out of import restrictions by March 2003. But the Indian Government, bowing to pressure from the US, advanced the lifting of QRs by three years.

However, the U.S. is itself violating international obligations such as backing off the Kyoto Protocol to regulate CO2 emissions though it is the biggest polluter. Responsibility is a two-way lane. And the lack of responsibility being shown by the U.S. in respecting international commitments should have been used by India to gain space in setting policy that ensures her people’s survival. In any case, India is arguing for maintaining QRs in the review of the Agreement on Agriculture. It should have maintained QRs as a right.

India is also arguing for a livelihood and food security exemption from the rules of the Agreement on Agriculture. Instead of defending the livelihoods and food security of the country, the Commerce Minister has threatened the survival of the Indian people, especially the farmers twice over - firstly, through removing restrictions on imports and secondly by announcing an agribusiness centered export oriented policy for agriculture. This "farm-to-port" export policy is a recipe for corporatisation of Indian agriculture. It will undermine our food security. Farmers loose markets by imports of artificially cheap products due to removal of QRs. They will loose their land, their water, their homes as corporations take over Indian agriculture to grow flowers and vegetables and fruits and shrimps for exports, with state support.

The Commerce Minister has through his EXIM policy committed India’s markets, soil and water as public subsidies to global corporations.

Barbie dolls might flood super market shelves soon - but how will the poor be fed if they have no livelihoods? How will farmers survive when both markets and resources have been snatched away from them?