'The Mother Of All CBMs'

So would the Srinagar-Muzaffarabad bus be able to serve as a stepping stone in resolving outstanding issues of dispute between India and Pakistan? The chiefs of PDP and the breakaway faction of APHC have expectedly divergent takes. 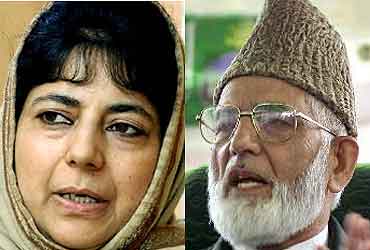 Nagendar Sharma: Would the Srinagar-Muzaffarabad bus be able to serve as a stepping stone in resolving outstanding issues of dispute between India and Pakistan?

Mehbooba Mufti : It definitely helps when you try to work to fulfil people’s aspirations. With this bus service, people-to-people contact would increase which would change many perceptions, and eventually the public support would help the establishments of both countries and they would be able to adopt a flexible approach from their stated positions.

Syed Ali Shah Geelani : So far as the Kashmir issue is concerned, the bus service cannot be of any help at all in terms of any solution. Till the time Indian government adopts a realistic approach, an issue which has been outstanding for more than 57 years now cannot be resolved. Thousands of Kashmiris have sacrificed for their cause, and they need a real solution to the problem. Merely opening roads and running buses is no solution.

BBC listener from Anantnag (J&K) : Mehbooba ji, by starting the Srinagar-Muzaffarabad bus , your party has fulfilled one of the electoral promises, but what about the solution to Kashmir problem, as your party the PDP is neither in agreement with the Indian point of view nor the Pakistani? You disagree with the militants as well, then what is your solution?

Mehbooba Mufti : The solution to the problem would come from dialogue. Talks with Pakistan have been progressing well during the past two years. We say that talks should also be held with those sections which feel alienated in Kashmir. Ever since our government came to power in October 2002, our Common Minimum Programme has emphasised on this. Things began moving in the right direction, the then Prime Minister Vajpayee visited Kashmir, and the Hurriyat held two rounds of unconditional talks with former Deputy Prime Minister Advani.

Now, the present UPA government also is very serious about continuing the dialogue with all sections. The Hurriyat leaders have expressed the desire to travel to Muzaffarabad to talk to leaders that side, I think Centre would consider this request sympathetically with all seriousness. For us, the bus is not merely the mode of transport, it would act as a bridge between the people of both sides to meet their near and dear ones and remove all misgivings. Our effort is that the ongoing dialogue process between President Musharraf and our Prime Minister should reach the common masses.

Syed Ali Shah Geelani : Our clear view is that the parameters for the solution have to be clear. Let there be a referendum: if the majority wants to stay with India, we would accept that, but if the majority wants to go with Pakistan then that has to be allowed. People of Kashmir have been living a life of uncertainty since 57 years, and have been suffering atrocities since 16 years. More than a million armed forces in the state have been given unfettered powers, and human rights violations are going on unchecked. India and Pakistan have been talking to each other for more than a year now -- what change has it made to the situation on the ground? Has the situation changed even by an inch? We do not oppose talks nor the sports being played, but what is changing?

Nagendar Sharma:Mehboobaji, how do you respond to the allegations of human right violations and no change in the situation?

Mehbooba Mufti : During the past year and a half, since PDP-Congress government came to power in the state, look at our track record. Geelani sahib was lodged in Ranchi jail, he was freed; so were other leaders like Yasin Malik -- all those who did not face serious criminal offences were allowed to lead normal lives. They are free to go and do whatever they want. A serious check is being kept on human rights violations, whether by security forces or others. The ceasefire on the borders, which was agreed by both countries, has made lives of people living on the borders at least tolerable. Recently held civic elections show people are coming out to vote, and the percentage has been appreciably higher. Now if all this is not a change on the ground then what is a change, could Mr Geelani tell me? Had there been no change in the situation, could people have turned out in thousands to welcome the bus passengers, and participate in the celebrations?

Syed Ali Shah Geelani : I would like to ask Mehbooba beti, could she please tell me has the government headed by her party fulfilled any of the electoral promises they made during the October 2002 assembly elections? They had promised to release all detenus languishing in jails of the state. Even today 1511 people are lodged in different jails of the state, and also in Delhi and Jodhpur. 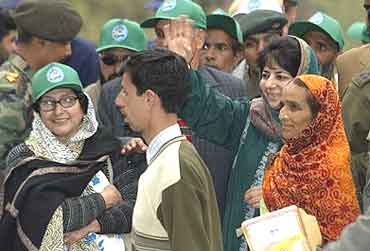 BBC listener from Uttar Pradesh : Mehboobaji, it is a good thing that the bus has been started, but what about the thousands of innocent Kashmiri Pandits who have been forced to live out of the state since decades now? Is your government doing anything for them, or have they been left at god’s mercy?

Mehbooba Mufti : We are very clear, Kashmiri Pandits are an important part of Kashmir, and without them we can never claim that the state is ours. Ever since our government came to power in the state in October 2002, we have been trying to create an environment in which the Kashmiri Pandits voluntarily and happily decide on their own to return to their homes. The sign of improvement is clear from the fact that Tulmul, a sacred place for the Kashmiri Pandits, which used to see a gathering in hundreds earlier, now sees a gathering in thousands.

Nagendar Sharma: But does the PDP-Congress government have any policy for their return?

BBC listener from Peshawar (Pakistan): Mr Geelani, your son was given an MBBS seat by Farooq Abdullah government, and the present Mufti government has spent lakhs on your treatment. Separatist leaders like Abdul Ghani Lone and Mirwaiz Farooq, who were more pro-India were killed by Indian security forces, how have you been surviving? Do you take money from Pakistan as well ?

Syed Ali Shah Geelani : All I can say is that your allegations are based on hearsay and are totally baseless. My son got an MBBS seat on merit, I was on Haj pilgrimage, when he was selected. So far as my treatment is concerned, I was suffering from Kidney cancer, while in Ranchi jail, so I is the duty of those who arrest you to treat the prisoner. There have been fourteen attacks on my life, so kindly correct your facts.

Nagendar Sharma: Mr Geelani, other separatist organisations in Kashmir have started saying that Pakistan is abandoning them, what is your view on Pakistan agreeing to the bus?

Syed Ali Shah Geelani : Pakistan should not have okayed the bus without keeping Kashmir as the core issue, it should have done the way General Musharraf did during his Agra visit, and later while addressing the both houses of Azad Kashmir Assembly. The decision of both countries to start the bus without giving full attention towards the core issue of Kashmir, is giving rise to apprehensions that the status quo may well be accepted as the final solution. As things stand, the fear is that LoC may be accepted as the final line of partition.

BBC listener from Oman : How do you see present UPA government’s Kashmir policy?

Syed Ali Shah Geelani : The recent statement of Indian Foreign Minister Natwar Singh that India is ready to talk on any issue without redrawing of borders, clearly shows India 's unrealistic attitude, and with such a stand there can be no hope for the solution of the problem continuing since last 57 years.

Those who are saying that the bus service would lead to great people-people contact, should just look at facts. For example, the bus which came from Muzaffarabad had some passengers who had to go to Rajouri and Poonch to meet their relatives. Now first they came to Srinagar , then went to Jammu and finally to Rajouri and Poonch, when both these places are at a stone's throw distance from the border. Why then the poor people had to travel hundreds of miles unnecessarily?

BBC listener from Delhi : Mehbooba ji, do you really think one bus service can help solve this contentious issue?

Mehbooba Mufti : The opening of Srinagar-Muzaffarabad bus is the mother of all Confidence Building Measures. If people of Jammu and Kashmir have got anything during the last 57 years, if something has been done for them, it is this route. There is no readymade solution to the Kashmir issue, we hope that in the coming days, the solution to the problem would come through such measures.