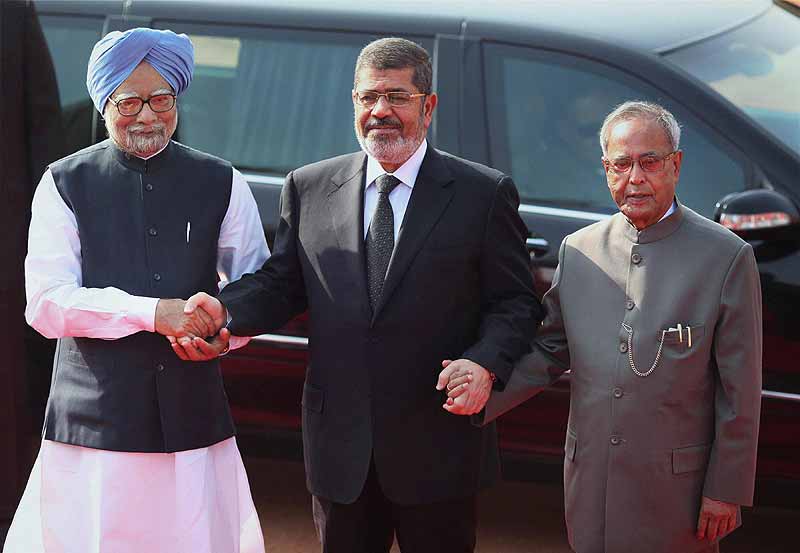 Egyptian President Mohamed Morsi’s first-ever visit to India, unfortunately, did not make the splash it should have made in the Indian media. Ruling UPA’s coalition partner DMK’s decision to pull out of the government on the Sri Lanka issue dominated the headlines of TV channels and newspapers. But the significance of Morsi’s visit and its potential to bring rich dividends to both India and Egypt cannot be underplayed or overlooked.

There are several reasons for this. To start with, Morsi, unlike his predecessors, came to power through a democratic election. In the history of modern Egypt this is an important fact as even Gamal Nasser, one of the most popular leaders of Egypt and the Arab World, had come to power through a military coup. Equally important is the fact that Morsi is a leading member of the Muslim Brotherhood, an organization that has championed political Islam for decades both in Egypt and in the other parts of the Arab World and beyond.

The fact that Morsi chose India among the countries to visit within the first year of his presidency, despite the turmoil and churning that is going on in Egypt and elsewhere in West Asia and North Africa, indicates the importance he attaches to Delhi. Some may point out that he also visited Pakistan before coming here. But it will be a mistake to see that as a hyphenation of the two South Asian neighbours on Cairo’s part. As the chair of the Organization of the Islamic Conference (OIC), Morsi could hardly have ignored Pakistan while coming to India. It became more difficult to do so since Pakistani President Asif Ali Zardari had visited Cairo recently. Moreover, it made sense, in terms of logistics, to club them together rather than making two separate trips to this region.

Looking at it from India’s point of view, Morsi’s visit opens up a vast opportunity for Delhi to re-engage with Egypt in a meaningful manner—something that has been missing for more than three decades—and also deepen its presence in the Arab World. The entire region—described by South Block as West Asia and North Africa— is extremely important for India. If one looks at the wider Arab World by including the Gulf States—India’s stakes in this region are very high. It not only serves as the main source of energy for India, it has over 6 million Indians living and working there. The annual remittance—$ 60 to 80 billion— that these workers send back to India each year takes care of at least one-third of India’s oil bill. Several thousand Indians visit the area each year for pilgrimage and tourism.

In addition, the total trade volume between India and the region is over $ 200 billion—not an insignificant amount, especially in the time of a global economic slowdown. Peace and stability in the region is vital for India to maintain its economic growth and development. Spread of violence, political instability and the threat of war between contending parties in the region, have the potential of huge negative implications for India. Instability and violence spreading through the region would lead India not only to think of the safety and security of its people living there. But the impact it would have on the oil price posing a huge burden on India’s economy and could well slowdown its current rate of growth and development significantly. India therefore needs to stay focused and engaged with the different players in this important region.

Historically, Egypt had been considered as the natural leader of the Arab World. During the 1950s and 60s, Nasser and India’s first Prime Minister, Jawaharlal Nehru, worked closely with each other to give leadership to the developing world and newly independent countries. But in the post-Nasser era, Egypt, because of several factors and many of them dictated by the US-Soviet rivalry during the cold war, was relegated to the back rows in Arab politics.

The Muslim Brotherhood, which had been the most vocal critic of the series of autocrats and dictators in Egypt and elsewhere, is today in power. It has not been an easy ride for it to make the journey from being one of the main opposition voices to the seat of power in the post-Hosni Mubarrak period. It had to put up a tough fight against the right wing sections as well those from the liberal wings of the anti-Mubarrak movement. It also had to find accommodation with the country’s powerful army establishment. The new constitution it brought about for Egypt was not without tough resistance and controversies.

But Morsi and his fellow members in the Muslim Brotherhood are on a learning curve. The mistakes and over-reactions that an organization which has a long history of being in the opposition makes on coming to power, is not new many Indian observers. Both the left and right wing parties in India—which had been opposition for years— had shown similar over-reactions on coming to power. But after initial hiccups that stems from satisfying varying groups and sections with its own ranks, they had settled down in running more stable governments. One can hope that Morsi and the Brotherhood, also falls into the familiar pattern where it speaks not only for its cadres and constituencies but for all Egyptians.

Given this backdrop, both in India and Egypt, Morsi’s visit gathers special significance. The Egyptian President, who is trying opening a new chapter in his country’s history in the changed world scenario, could learn from India’s experience. As a vibrant and pluralistic democracy with a mixture of various religious, ethnic and linguistic groups, India does serve as a model for an Egypt trying to accommodate the aspirations of its people—majority of whom are under the age of 30.

There is another important reason why India and not one of the western countries or Turkey or Iran, serves as a better model for the new Egypt that Morsi wants to give shape to. India and Egypt had begun their journey together in the Nehru-Nasser period not only to reshape Asia and the developing world but also their respective countries. In the subsequent years both had a similar base—an educated middle class beginning to expand their knowledge pool by setting up colleges, universities and institutions. They also had a strong military, a growing economy and also a ‘soft-power’—with not only well-known educational institutions but also a popular film and music industry. But after the heady days of Nasser, where Egypt was acknowledged as the leader of the Arab World, it started being pushed back by other contending players in the region. India on the other hand, despite its political chaos and huge challenges, managed to stay on track, posing itself not only as an attractive market and investment destination. But also as a country whose voice mattered and with which many countries—both in the developing and developed world—wanted to engage.

Though sceptics would say otherwise, even on the question of India finding a place as a permanent member in the expanded UN Security Council, a broad consensus is emerging to back its candidature. Egypt, on the other hand , hardly find mention in the Africa group, where South Africa and Nigeria are seen as the leaders. Similarly on the issue of nuclear energy—Egypt having signed the Nu clear Non Proliferation Treaty (NPT) had given up its option to use nuclear energy for military purposes, whereas India, having resisted pressure from the west and others, went nuclear in May 1998. After the initial tough words and measures, it is the western countries which are taking the lead to get India in as a nuclear weapons state in the elite clubs of the Nuclear Suppliers Group and other bodies. On the economic front too India’s growth had been acknowledged by the leading economies in the world to make it a member of the Group of Twenty (G-20) and other important blocs and forums.

During his interaction with Indian leaders, Morsi made it clear how much he looks up to India as a model where the two countries can share their experience to help each other in the coming days. The Egyptian President stressed the two sides should not only try and revive the days of Nehru-Nasser bonhomie but go beyond. Many in South Block see this as an offer from Cairo to get into a “Strategic Partnership” with Delhi. Morsi has already expressed his desire—like many other countries—to become a member of the BRICS (Brazil, Russia, India, China and South Africa).

Interestingly, Morsi came to India not only came with a large business delegation—making it clear that economic cooperation could well play an important part in the future relationship between the two sides. But the last-minute inclusion of his defence minister in the delegation also indicates that Morsi is interested in a broad based relationship with Delhi. Seven agreements in various fields—energy, agriculture, nano technology, bio-technology, space etc—show the extent the two sides could go in the coming days.

But a lot would now depend on how India responds. Morsi has made the first important gesture to reach out to India. A lot would depend on how the Indian leadership matches it. If in subsequent months Egypt gets relegated to one of those countries where despite the bonhomie and traditional ties, the Prime Minister found little time to focus, then India may turn out to be the bigger loser.