Turning to politics, especially through an emotive - though seasonal - issue like Cauvery, makes sense for Rajnikanth, but the question is with whom and when will the superstar "do politics". 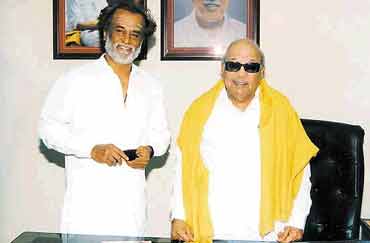 There isn't much really happening in the world of politics in Tamil Nadu.

Jayalalitha Jayaram seems pretty well-ensconced in Fort St. George (but for the Supreme Court’s final say on the appeals against the TANSI cases); M. Karunanidhi is content to issue statements on a regular basis from Anna Arivalayam, the DMK HQ; the Cauvery issue may be ‘politicised’, but then one cannot bring water by staging protests; Amma’s government is able to steamroller everyone on major issues of reform and governance...

Only, occasionally, when PMK chief S.Ramadoss comes up with an idea like a separate state or the call to boycott a film, people wake up, take notice, but soon forget. Veerappan kidnaps a former minister and disappears from the radar of the news-editors and the STF...

MDMK chief Vaiko and a host of other "Tamil nationalists" are jailed under POTA, but the Tamil people seem to have forgotten about them too. Every fortnight, we learn, through some corner of the newspaper, that Vaiko’s custody has been extended: there’s a picture of the "caged Tiger" waving to a few slogan-shouting party workers at the magistracy.

Otherwise, politics in Tamil Nadu has become as interesting as curd rice.

So, last Sunday, when Shivaji Rao aka Rajnikanth decided to pull a fast one on the people of Tamil Nadu, there was yet another bout of speculation over with whom and when the superstar will "do politics".

Karnataka’s refusal to open the sluice-gates of Cauvery only became a pretext for Rajni to test the political waters. In an era when being seen on television is all-important, Rajni postponed his show by a day, so that ‘live coverage’ of both the Neyveli show and the Chepauk fast was possible on Sun TV. A case of media dictating politics.

And when Rajni decided to distance himself from the rest of the film world and plough a lonely furrow by fasting near the Chepauk stadium at Chennai for a day, politicians of all hues figured it made good political sense to keep him company.

Karunanidhi, once a stalwart of the Periyarite Self-Respect Movement, at the expense perhaps of some self-respect, got in touch with a fasting Rajni on the cell-phone and expressed the wish to come and greet him. Rajni appreciated the gesture, but thought otherwise. So heir-apparent and son M.K.Stalin arrived, with union minister T.R.Baalu in tow.

The state Congress working-president E.V.K.S. Ilangovan was all teeth as he draped a shawl around Rajni. Puthiya Tamilagam’s K.Krishnaswamy spent the entire day on the dais and even sipped the same fruit juice which Rajni drank to break the fast. P.Chidambaram was the first to give attendance; BJP leaders, including union minister for Thirunavukkarassar came calling. Most film personalities – expecting Bharatiraaja – who attended the Neyveli rally the previous day -- also showed up at Rajni’s fast. Kamal Haasan, too, at last realised that there were political overtones to the fast.

But for the AIADMK and PMK, every political formation that takes itself seriously in Tamil Nadu wanted to be seen at Rajni’s fast. ‘If you are not with me, you are with them’, seemed to be Rajni’s logic. For now, the political punters are placing high stakes on Rajni’s premium. He is the unraced horse that, they think, can fly, and with whom they could hitch a ride.

So the BJP, Congress and DMK shelved all ideological pretensions and graced the dais. The next day, technology abetted politics as the Congress issued posters of Sonia Gandhi and Rajnikanth waving together.

Turning to politics, especially through an emotive – though seasonal – issue like Cauvery, makes sense to the superstar who on the personal front is in a soup of his own stewing.

After Baba flopped, he compensated for the losses of the exhibitors. They thanked him, sang his praises, and promptly stopped screening the film. And given that the hype of the political Rajni resembles the pre-release hype over Baba, his politics could go the same way as the film.

When he initially decided to abstain from the Neyveli meeting, Rajnikanth’s effigies were burnt, some even by his own fans. Even the worst opponents of MGR did not burn his effigy. So to think that Rajni could be another MGR is simply kite-flying. But wait, imagine: a post-Karunanidhi scenario when the search for a charismatic alternative to Jayalalitha will be even more frantic.

Imagine more: TANSI Rani Jayalalitha is caught in the Supreme Court’s judicial web and her political career comes to an abrupt end. Leadership might be thrust upon Rajnikanth. For now, the star will have starry-eyed fans in Karunanidhi, Chidambaram, Ilangovan et al.

Postscript: After the fast at Chepauk – where Rajni offered Rs.1 crore to link up the Ganga and the Cauvery – if he does not make up his mind on entering politics, he can at least set up an emporium, with help from wife Latha, and sell all the costly shawls he received and make up for the money he lost on Baba.

'Congress Is The Lesser Evil'