The Killing Fields Of Nandigram

The administration, especially the police, was asked to step aside and remain mute spectators to hundreds of well-armed CPI(M) cadres running riot in Nandigram for six days. 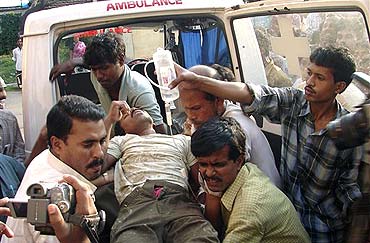 The red flags are fluttering merrily in the early winter breeze at Nandigram after a gap of 11 months. On the ground, "victorious" CPI(M) cadres, drunk on their victory--the "recapture" of more than a hundred villages that had remained beyond their control for so long--are taking out processions and bike rallies, bursting countrymade-bombs like Diwali firecrackers and ensuring that the lakhs who had supported the anti-land acquisition brigade--the Bhumi Uchched Pratirodh Committee (BUPC)--submit meekly to the CPI(M). But tension is palpable, as is the intense loathing for the CPI(M) that had deployed its armed cadres, many from outside this East Midnapore district, to kill, rape, loot and "recapture" the villages that had remained under the BUPC's control for so long.

The operation to liberate Nandigram and re-establish the CPI(M)'s grip there started in the middle of last week and was, by all accounts, a well-planned affair that had the blessings of the party's top leadership. The administration, especially the police, was asked to step aside and remain mute spectators to hundreds of well-armed CPI(M) cadres running riot in Nandigram for six days till Sunday.

Even a stinging rebuke from Governor Gopalkrishna Gandhi asking the state government to act failed to move the powers that be at Writers' Building. The CRPF, which was sent following a request from the state government, arrived on Saturday, but is yet to deployed in the trouble-torn and traumatized villages, as I write this piece at 8:50 PM.

In fact, five companies of the para-military force, led by its IG Subhas Goswami and DIG Alok Raj, had to face barricades put up by the 'red cadres' at two places in the 30 km journey from Tamluk to Nandigram town. They'll remain stationed at Nandigram police station on Monday evening and will fan out to the villages only from Tuesday morning.

The whole area remained out of bounds for media persons ever since the CPI(M)'s operation began and it was only on Monday, after the party had been successful in re-establishing its total control in the area, that scribes were allowed in. But not before we witnessed a fair bit of "red terror", perhaps to serve as an ominous reminder about the CPI(M)'s "power" to us. The Outlook team, one of the first to enter Nandigram after its "re-capture", was caught in many CPI(M) processions and in one along Debipur village, cadres burst countrymade bombs in front of us to demonstrate their "power". The party's local committee secretary, Tilak Roy, however told us that the bombs were "firecrackers left over from Diwali" and asked us not to write about such "celebrations" by his "enthusiastic party workers". Perhaps it was this "enthusiasm" which was responsible for a TV camera person having her camera and mobile phone snatched when she went to cover the ransacking of the Trinamool Congress office by the CPI(M) cadre on Sunday.

By Monday afternoon, red flags were up in every nook and corner of Nandigram, including the Tekhali bridge that had served as the no-man's land between the warring CPI(M) and BUPC activists. CPI(M) activists and supporters who had been displaced from their villages were still returning home. They, too, had suffered at the hands of the BUPC: driven out of their homes, they have had to spend months in relief camps funded almost entirely by the CPI(M). Their houses had been looted and often torched and some have had to suffer serious injuries in exchange of fire with BUPC activists. Their children had to stop going to schools and have lost a full academic year. Most have not been able to cultivate their fields or pursue their vocations, thus becoming dependant for their meals and all other necessities on the CPI(M). Naturally, they were desperate to return to their homes.

But with the BUPC resisting all efforts by the state administration to re-settle the displaced in their respective villages, and putting up stiff and often impossible conditions for such return, the ground became ripe for the CPI(M) to initiate 'direct action'. They did so with full and brutal force, importing sophisticated arms and sharp-shooters as well as leaders of the party's 'killer squads' from neighbouring districts. 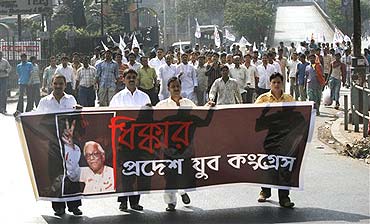 Though the official death toll is four, local persons say they saw scores of dead bodies, all of which have been removed and burnt or buried by the CPI(M). There is truth in these allegations--on Saturday, 13 CPI(M) activists, including two persons who were wanted by the CBI for their role in the killings of Trinamool Congress workers in Choto Angaria a few years ago, were nabbed by locals while they were removing some injured from Nandigram.

For five days, while the CPI(M)'s 'killer squads' went on the rampage, the police kept themselves confined to their barracks. District Superintendent of Police S.S.Panda said his men were "scared" to venture into the killing fields of Nandigram and were awaiting the arrival of the CRPF. Which was just a lame excuse for inaction and a shameful ploy to give the CPI(M) squads a free hand to complete their task. But the non-deployment of the CRPF immediately after the force's arrival in Calcutta on Saturday has raised doubts over the state government real motive.

The Outlook team was also the first to venture into Satengabari, braving belligerent CPI(M) cadres who kept issuing warnings and threats openly. We had a close shave at Jambari village where party cadres surrounded us and demanded to know what we'd write. It was only after we assured them that we would report on the sorry plight of those who had been driven out of their homes by the BUPC activists that we were allowed to return in one piece. At the village, which was "liberated" from the BUPC on November 6, the party's killer squads looted and torched two houses, severely assaulted a 70-year-old and drove a few men, all activists of the BUPC, out of their damaged homes.

"Now, everything is peaceful here. We've established our total control and have rid our village of the BUPC's terror," boasted CPI(M) branch secretary Sudarshan Maity who had, only minutes ago, accused us of being "Trinamool agents" who needed to be taught a lesson.

But the calm that envelopes Jambari village is an elusive one. Before the CPI(M) activists arrived on the scene, many villagers, speaking in whispers, told us about the 'red terror' they had been liberated from eleven months ago that will again haunt them from now on. They spoke of the CPI(M)'s atrocities, high-handedness and total control over all aspects of their lives till January this year when trouble broke out and the newly-formed BUPC drove out the CPI(M) from their villages and their lives.

The Nandigram story is, however, not about the BUPC establishing control over more than a hundred villages 11 months ago and making them 'out of bounds' for the state administration after driving out CPI(M) supporters and activists. Or about the CPI(M) deploying its killer squads to 're-capture' Nandigram, killing, raping and maiming scores in the process. It is all about the state government having failed miserably in its task of administering.

The state administration has re-established control over Nandigram again now. But it did so riding piggyback on the CPI(M)'s extra-constitutional medieval warfare way. This is where it has erred. Sinned would be a better word. But then, the distinction between the party (the CPIM) and the government had long ago blurred in West Bengal.