'To be honest, I never dreamt of playing for India. I just played the game for the love of it. So just to play for India was like a good fairy tale. And it still continues.' 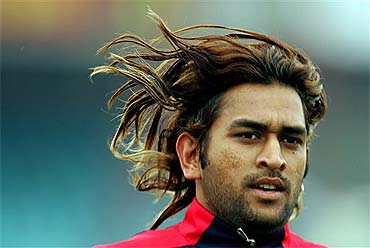 Mahendra Singh Dhoni termed his elevation to Twenty20 captaincy three years after his India debut as a "fairy-tale" and said he would strive hard to meet the challenges and expectations.

"To be honest, I never dreamt of playing for India. I just played the game for the love of it. So just to play for India was like a good fairy tale. And it still continues," Dhoni said in London.

"It's more special because I'm just three years old in international cricket. Now, it's important to go out and lead from the front.

"It's a great honour and a privilege to be leading the country and I'll strive hard to measure up to the expectations of the people back home."

The 26-year-old Ranchi-born player, who has caught the imagination of the country with his big hitting and long locks, owed his success to the best wishes of the people of his state.

"Five years back, no one from Jharkhand would even have imagined that someone from their state would be privileged to don the India cap. So to have not only played for India but also be given the honour of leading the country, I think, is a historic day for Jharkhand," he said.

"I hope it will inspire young cricketers all over Jharkhand to dream big and pursue them with a lot of determination and hard work."

Dhoni spoke about the challenges he would face as a captain.

"The challenge is to take right decision at the right time. It's not just about the captain, it's about the team, it's about collective responsibility," he said.

"If the players do well the team wins. Only once in 25 games, a captain has to make a major decision, otherwise most of the decisions are taken after consulting the players."

Asked whether he was surprised or was he expecting the honour, Dhoni said he had some idea about it.

"A lot of it has been appearing in the media, so it's no big surprise."

Asked about his relative lack of experience, Dhoni quipped, "It doesn't matter! I didn't have any experience of playing international cricket but I still played. There's always a first time."

He then dwelt on the key aspect for his team in South Africa.

"India has just played one Twenty20 game, so it's about individuals putting their hands up and doing the job expected of them.

"The conditions on South Africa will be pretty difficult since we are going there at the start of the season. We will have to adapt, and adapt quickly."

Asked what he had learnt from his Test captain, Rahul Dravid, Dhoni said, "being cool and calm".

A product of his own enthusiasm and drive, Dhoni made his one-day international debut against Bangladesh in December 2004.

Since then, he has taken rapid strides to fame and fortune mainly to his big hitting prowess that gripped the nation immediately.

That he has three one-day hundreds and 13 half-centuries in 76 appearances at an average of 46.97 with an amazing strike rate of 98.75 underlines how quickly he has moved up the ladder of success.

"I just work hard like all others but now I have a huge responsibility on my shoulders and I will give it my best shot."

With seniors like Virender Sehwag, Yuvraj Singh, Ajit Agarkar and Harbhajan Singh also named in the team, Dhoni won't be short of advice.

It is something he would most heartily welcome.

"Even in the present side, Rahul (Dravid) has senior pros like Sachin Tendulkar and Sourav Ganguly who are always around to provide some invaluable inputs.

"It will be no different for me with Yuvi, Viru, Ajit and Bhajji around. It's a team game and anything for the good of the side should always be welcome."

Another First For Sania