How can Greece survive without more money? I don't know. I strongly suspect that no one else does, either. Including the Nobel Prize laureates. 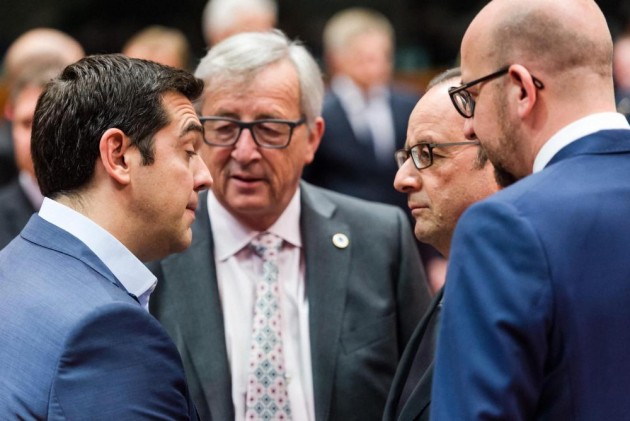 EVERYBODY HAS already voiced his (or her) opinion on the Greek crisis, whether he (or she) has an opinion or not. So I feel obliged to do the same.

The crisis is immensely complicated. However, it looks to me quite simple.

The Greeks spent more than they earned. The creditors, in their incredible impertinence, want their money back. The Greeks have no money, and anyhow, their pride does not allow them to pay.

So what to do? Every commentator, from Nobel prize-winning economists to my taxi driver in Tel Aviv, has a solution. Unfortunately, no one listens to them.

Angela Merkel and Alexis Tsipras go on fighting World War II. But the relations between the two nations played a role in my family long before that.

AS A boy, my father was a pupil in a German "humanist" high school. In these schools, pupils learned Latin and ancient Greek instead of English and French. So I heard Latin and Greek sayings before I went to school and learned Latin myself – for half a year before we fortunately left Germany for Palestine in 1933.

Educated Germans admired the Romans. The Romans were straight-minded people who made laws and obeyed them, almost like the Germans themselves.

The Greeks invented freedom, something the ancient Hebrews did not even dream of. The Greeks invented democracy. In Athens, everybody (except slaves, women, barbarians and other inferior folk) took part in public discussions and decision-making. This did not leave them much time to work.

That was the way my father looked at them, and this is the way decent Germans look at them now. Nice people to have around on vacation, but not serious people to do business with. Too lazy. Too life-loving.

I HAVE stayed several times in Greece, and always liked the people.

My wife, Rachel, loved the island of Hydra and took me there. To find a ship to go there from Piraeus was quite an ordeal. That was of course before the internet. Every shipping agency had a timetable for its boats, but there did not exist a general timetable. That would have been too orderly, too German. (If Piraeus had been Haifa, there would have been an all-inclusive timetable in every shop window.)

I was invited to several international conferences in Athens. One was presided over by the wonderful Melina Mercouri, so intelligent and so beautiful, who served at the time as a cabinet minister. It concerned Mediterranean culture, and was mixed with a lot of good food and folk dances. I once helped to host Mikis Theodorakis in Tel Aviv.

So I have no prejudices against the Greeks. On the contrary. Before the last Greek elections I received an e-mail message from a person I did not know, asking me to sign an international statement of support for the Syriza party. After reading the material, I did. I sympathize with their heroic fight now.

I am reminded of the "Sailors' Revolt" in Israel in the early 1950s. It was an uprising against the governing bureaucracy. I supported it with all my heart and was even arrested for a few hours. When it all ended in a glorious defeat, I met a famous leftist general and expected to be lauded. He said: "Only fools start a struggle they cannot win!"

It boils down to this: the Greeks owe a lot of money. A huge lot of money. It is now immaterial how this huge debt came about, and who is to blame. Europe (the very name is Greek) has no chance of getting the billions back. But they'll be damned if they will pour more money into this bottomless pit. How can Greece survive without more money?

I don't know. I strongly suspect that no one else does, either. Including the Nobel Prize laureates.

FOR ME, the most important aspect of the disaster is the future of the two great experiments: the European Union and the Euro currency.

When the European idea gained ground on the continent after the fratricidal World War II, there was a great debate about its future contours. Some proposed something like the United States of Europe, a federal union on the lines of the USA. Charles de Gaulle, a very influential voice at the time, objected strenuously and proposed l'Europe des Nations, a much more loose confederation.

Much the same debate took place in America before the final decision to create the United States, and again at the time of the civil war. In the end, the federalists won, and the confederate flags are being burned even now.

In Europe, de Gaulle's idea won. There was no strong will to create a united European state. National governments were ready, after some years, to create a union of independent states, which grudgingly transferred some sovereign powers to the super-government in Brussels.

(Why Brussels? Because Belgium is a small country. Neither Germany nor France was ready to allow the union's capital to be located in either of them. It reminds one of the Biblical King David, who moved his capital to Jerusalem, which belonged to no tribe, so as to avoid the jealousy between the powerful tribes of Judah and Ephraim.)

The Brussels bureaucracy seems to be heartily hated by all, but its power is inexorably growing. Modern reality favors larger and larger units. No future for small states.

This brings us to the Euro. The European idea led to the formation of a huge bloc, in which a common currency could flow freely. To a layman like me, it seemed like a wonderful idea. I don't remember a single prominent economist warning against it.

Today it is easy to say that the Euro bloc was flawed from the beginning. Even I understand that you cannot have a single currency when each member state shapes its national budget according to its own whims and political interests.

That is the fundamental difference between a federation and a confederation. How would the USA operate if each of its 50 member states ran its own economy independently of the other 49?

As the economists teach us now, something like the Euro crisis cannot happen in the US. If the state of Alabama is in bad financial shape, all the other states step in automatically. The central bank (or Federal Reserve) simply shuffles money around. No problem.

The Greek crisis arises from the fact that the Euro is not based on such a federation. The Greek economic breakdown would have been stopped by the European central bank long before it had reached the present point. Money would have flowed from Brussels to Athens without anybody even noticing. Tsipras could have embraced Merkel in her chancellery and happily announced "Ich bin ein Berliner!" (I can't really imagine Merkel going to Athens and proclaiming "Ich bin eine Griechin!")

The first lesson of the crisis is that the creation of a currency union presupposes a readiness of all member states to give up their economic independence. A country that is not prepared to do so cannot join such a union. Each country can keep its precious football team, and even its sacred flag, but its national budget must be subject to the joint economic super-government.

Today that is quite clear. Unfortunately, it was not clear to the founders of the Euro bloc.

In this respect, a giant nation like China has a huge advantage. It is not even a federation, but in practice a unitary state, with a unitary currency.

Small states, like Israel, lack the economic security of belonging to a large union, but enjoy the advantage of being able to maneuver freely, and to fix our currency, the Shekel, according to our interests. If export prices are too high, you just devalue. As long as your credit rating is high enough, you can do what you want.

Fortunately, nobody invited us to join the Euro bloc. The temptation would have been too strong.

THIS BEING so, we can follow the Greek crisis with some equanimity.

But for those of us who believe that after achieving peace with the Palestinian people and the entire Arab world, Israel must become a part of some kind of a regional confederation, this is an instructive lesson.

I wrote about this even before the State of Israel was born, calling for a "Semitic Union". It probably won't happen while I am still around, but I am fairly sure that it will come about before the end of this century.

It cannot happen while the economic gap between Israel and the Arab countries is as immense as it is now – with per capita income 25 times higher in Israel than in Palestine and many Arab countries. But once the Arab world overcomes its present turmoil, they can hope for rapid progress, as is happening in Turkey and Muslim countries in East Asia.

Sometime in the not too remote future, in historical terms, the world will consist of large economic units striving to create a working economic world order, with a joint currency.

It may seem silly to think about this in the present situation. But it's never too early to think.

Always remembering what Socrates said: "The only true wisdom is in knowing that you know nothing."