I was often amazed that a person who had such an acutely sensitive view towards the injustice in his society could shut his eyes to the inhuman oppression in the Soviet society, where he lived for years.

As long as a person is alive, we often tend to associate one face with him, framed in our mind's eye. But death abruptly shatters this frame and the 'face' breaks free from its confines - what we thought as 'one' divides itself into many faces, each face with its own memory, each memory with its own face. What a strange paradox - death, which we thought of as full stop, begins to seem as a fount of thousands of flowing out images of life.

Today, when I remember Bhisham, I recall those images flowing in the stream of memory. The first image is probably the one in the derelict days after Partition where he is reading a story in front of ten or twelve of us in a rundown room of a private college. Gentle face, soft voice, restrained, calm but keeping pace with the ups and downs, every moment alive to the twists and turns of the story. Author, speaker and actor, playing three roles at once. This was a distinctive feature of Bhisham Sahni's life - managing to play various roles under pressures of need and demands of time. Taking recourse to an old idiom, it can be said he was such a Hindi writer who had 'tasted the water of seven streams' (saat dhaaroN ka paanii piyaa thaa).

If we see a long gallery of unmatched characters in his stories and novels, where each person is present with his class and family; pleasures and pains of his town and district; the whole world of perversions and contradictions; it is because the reservoir of his experience was vast and abundant. At the request of his father – would anyone believe? – he dabbled in business, in which he was a miserable failure. With his high-spirits and passion for life of the common people, he travelled through villages and towns of Punjab with the IPTA theatre group; then began to teach to earn a living; and then lived in the USSR for seven years as a Hindi translator. This sprawling reservoir of experience collected in the hustle-bustle of various occupations ultimately filtered down into his stories and novels, without which, as we realise today, the world of Hindi prose would have been deprived and desolate. The 'simplicity' of his work comes from hard layers of experience, which distinguish and separate it from other works of 'simplified realism.'

I feel this insight of experience, somewhere, manages to free him from his opinionated assertions too. During the cold war years when the terrors of Soviet socialism had come out for all to see, I had long - at times, quite bitter - debates with him, which are possible only between two friends. I was often amazed that a person who had such an acutely sensitive view towards the injustice in his society could shut his eyes to the inhuman oppression in the Soviet society, where he lived for years. This paradox in Bhisham Sahni's life wasn’t limited to him, it is seen in various Marxist artists of the 20th century.

What was this paradox? While on one hand, fascinated by 'humanistic principles', he could not believe that the socialist system itself could be 'inhuman'; and, on the other, while writing about his own society, fortunately, instead of portraying abstract ideals, he was able to express the hard realities of human condition with great authenticity, in his stories, plays and novels. I don’t recall Bhisham Sahni ever confronting this paradox, not even in his autobiography, where he, uninhibitedly and transparently, writes about the ups and downs of his life

But, on artistic standards, this doesn't shorten Bhisham Sahni’s stature. If despite this paradox the clamour of truth in his stories doesn’t sound false, it is because he was able to tap into the contradictions and helplessness of Indian middle class to bring out its small virtues smeared in dust, distress and sweat, not suffuse it with abstract righteousness of the socialist ‘man'. 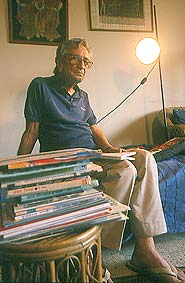 Strangely, this paradox in him marred the truth of that novel the most which is none other than his most talked about, prestigious and popular work Tamas, where the 'goodness' of man is not very satisfying when confronted with the terror of Partition. Despite being 'politically correct', the artistic authenticity of the novel seems suspect every now and then. By implicating the British as responsible for Partition, we can not get away from the agony of self examination.

If not on the larger canvas of the novel, Bhisham Sahni is able to express the terrifying tragedy of Partition with an extraordinary compassion in his stories. Amritsar Aa Gaya Hai (‘We have reached Amritsar’) is one such exceptional work where Bhisham gets away from the external reality and points to the bloody fissures etched on people’s psyche. This is possible only for a writer who, in the darkness of historic events has seen the sudden 'accidents' that happen inside human hearts from up close.

If Bhisham is able to bestow more of a human reality to the terrors of Partition in his stories, it is because in those, his characters, instead of blaming the circumstances or each other, are able to so manifest their inner fears, cowardice, weaknesses and the human goodness hidden in some corner of their hearts that is not visible in the daily interaction of average lives.  While, in the 'normal routine' of our daily lives we try to stay away from confronting hard realities, the characters in his stories, in different situations, act as mirrors for each other, exposing themselves with all their shining and murky realities.

If he didn’t have this artistic distinctiveness, Bhisham, like other ‘progressive’ writers, would have been an idealist and not the loved and liked writer of the Hindi fraternity. His autobiography, written in his last years, Aaj Ke Ateet (Today's Pasts), where he untangles the knots of his life with uninhibited humour and honesty, seems second to none. It is a shining example of the unpretentious creativity with which a writer can follow his writerly "dharma" till his last years.

'Till...his last years’? Writing these words gives a jolt. Despite having lived a long life, we were so used to his lively and large-hearted presence that it is difficult to believe that there could be an 'end' or 'ending' to his life. After reading his last collection of stories Daayan (Witch), I was amazed that even after so many years there seemed no repetition or staleness in his writing. Each of his stories seemed to bring something sudden from newer directions, which was as new for him as it was unexpected for us. That Bhisham never paused, never halted in such a long creative journey is a big achievement; but what is bigger perhaps is that his life nurtured his work and his work nurtured his life, both nurtured each other continuously. After living such a full, beautiful and creative life, his passing away also seems a simple and calm acceptance.