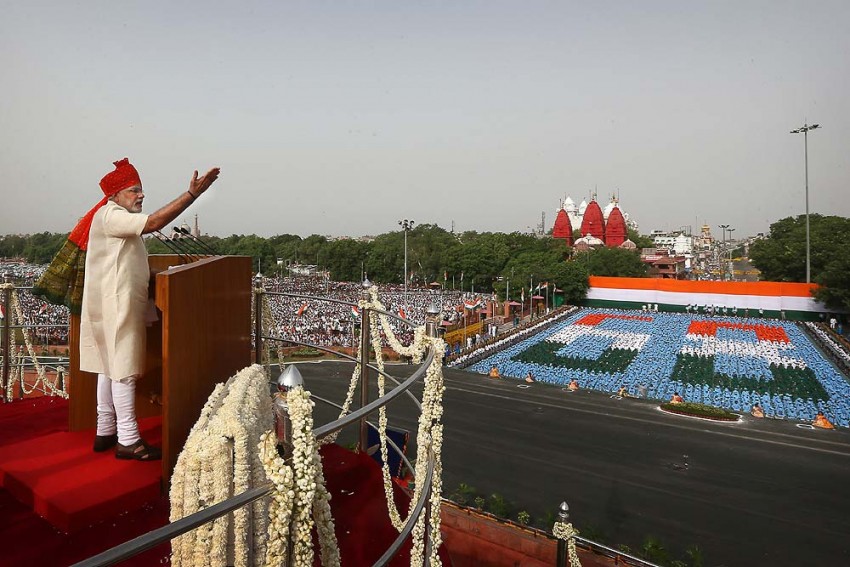 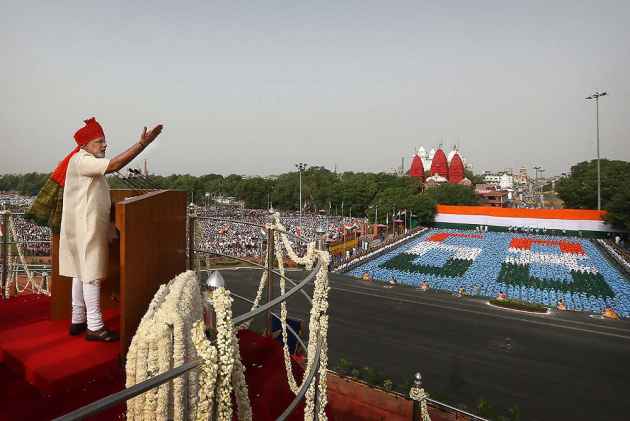 Narendra Modi was different from other Prime Ministers while addressing the nation from the ramparts of the Red Fort on 15 August 2014. He spoke of governing India through sahmati (consensus) not bahumati (majority) and sought the cooperation of people and political parties in this mission. He thanked his predecessors and their governments for taking the country to the heights it has attained. Yet while recalling the contributions of various personages he mentioned none from the Nehru-Indira dynasty, while speaking highly of Mahatama Gandhi, Lal Bahadur Shastri, Sardar Vallabhai Patel, Sri Aurobindo and JP.

On JP this is what Modi said: “On 11th October, the birth anniversary of Jaya Prakash Narayanji, I will present a complete blueprint of Saansad Adarsh Gram Yojana before all members of Parliament and state governments. I urge state governments that as per feasibility in their states, all MLAs should resolve to establish a model village each.”

My mind went back to the Emergency days of September 1975 when, within the confines of Chandigarh’s PGI special ward (notified as Jail), I had long-ranging conversations with JP on India’s economy and his concept of village/rural development. The deliberations centred around the journal Alternatives lying on his table. I briefly perused the journal and found it good, more so being a student of Economics. JP said it was a new high-class journal, edited by Rajni Kothari. The first issue sent by Justice VM Tarkunde was given to him by the Jail Superintendent.

Sensing my interest in the subject and the journal JP said that E.F. Schumacher, famous for his book Small is Beautiful who had written the first article, ‘Alternatives in Technology’, was a good friend of his. JP also commended the second article, ‘Development-the third way’ and said that he had all along been advocating the ideas contained in the article written by Jimoh Omo-Fadaka. The substance of the concept enunciated in the article was that the non-industrial countries had until then ignored the cardinal demand of development i.e. the development process must begin by the economy shifting from a colonial externally oriented structure to one internally responsive. The experience of countries that have chosen this path of economic reconstruction is most instructive. They have opted out of production for the so called world market and diverted their resources to the development of their material and technological base.

According to JP these countries are pioneering a third way of development, which avoids the pitfalls of both capitalism and communism. They are drawing on the experience of other nations but modifying the earlier models in the light of social and economic conditions specific to their own indigenous conditions. That is, they are basing their development on the traditional rural culture of their countries. China was the typical example where this model was pursued and now the country is dominating world markets. On the other hand India reached out to the world market without strengthening and consolidating its domestic base and in the process has fallen between two stools!

The non-industrialized countries need to develop on their own, to invest their traditional concepts with new meanings, but not slavishly accept the standards of industrial countries whether of the West or of the East. The almost universal tendency for a centralized political, economic, and social system that is associated with both of them should be abandoned. This in effect means that the non-industrialized countries will have to develop an independent economic system, an appropriate technology of self-help, a pattern of trade and political institutions that answer best to their own specific requirements. They should be committed to pluralism and decentralized decision-making.

The types of societies that will emerge from the adoption of these strategies and techniques will be a conglomeration of stable, self regulating, self sufficient and self financing, small-scale human societies, completely different from the present centralized and bureaucratic ones. The greatest need appears to be a process of mental decolonization, since neither common sense nor sound economics or their own past experience informs the present practice.

It must be admitted, however, that the adoption of these strategies in toto by many non-industrial countries is unlikely. But many of the development techniques-such as labour investment, work and study programs of education, decentralization of decision making and above all the psychological drive to show the peasant that he can initiate development himself and that he need not limp along supported by the twin crutches of outside expertise and outside aid of dubious value-are directly applicable to solution of their problems. These are at least their means of escaping poverty.

This was a heady and engaging economic discussion with one of India’s tallest social reformers. According to JP, Schumacher’s idea of replacing mass production technology with a technology for production by the masses was the most appropriate development model for India. This is a philosophy and thinking in line with that of Mahatma Gandhi and very relevant to the needs of the people. JP said that he did his best to persuade the government of India to adopt a people oriented technological alternatives instead of the western oriented production methods and technology which has not brought the desired results.

JP went on to say that at the request of Indira Gandhi he had invited Schumacher who came and had discussions with DP Dhar, then union planning minister and Mrs. Gandhi. Both were impressed by Schumacher’s views and ideas. At their request Schumacher had given a note to PM highlighting eight points. Nothing came of it since no one including Mrs. Gandhi had clarity or sincerity as to what is to be done to remove the abject poverty under which the nation was reeling.

JP went on to say that ours being a predominantly rural society, what is required is the rural way of development from the bottom to top (at microeconomic level) and not the urban way from top to bottom (at macroeconomic level) as is being practiced now. This is what Gandhiji has been advocating. But in real practice we have tried to ape the industrialized west, and the international market, and in the process forgotten and forsaken our moorings. This is the major cause for the conflict and tension pervading the body politic and economic spectrum of this country.

I was deeply impressed by the concept and its practical force. JP had said that all he was striving was to help the people to fight out their mental battle in the political, economic, social arenas. The deep-rooted colonial psychosis and the blind aping of western philosophy of industrialisation have been the bane of Indian society. Hence the abject poverty and the sharp disparity in income that we have in India. We should develop our own political philosophy, economic concept and social system.

What prophetic words! One only hopes that Narendra Modi’s Gram Yojana blueprint, which is to be delivered on JP’s birth anniversary, would incorporate the Lok Nayak’s convictions and what he stood for and not ape alien models to make India’s villages as mere markets and show-pieces.

Rural development is about strengthening and sustaining the peasantry which is described as the ‘class constituted by small farmers, tenants, sharecroppers, and labourers on the land where they form the main work-force in agriculture and forestry’. It is this ‘peasantry’ that even today constitute the backbone of India and feed its 120 crore population. Yet what is happening on the ground in the name of ‘development’ is the ‘destruction of peasantry’.

While formulating the Yojana Prime Minister would be well advised to read and re-read the poignant verses of Oliver Goldsmith’s pastoral poem, ‘The Deserted Village’ written two-and-a-half centuries ago (1770) which still rings true in India:

“Ill fares the land, to hastening ills a prey;
where wealth accumulates, and men decay;
Princes and Lords may flourish, or may fade;
a breath can make them, as a breath has made;
but a bold peasantry, their country’s pride,
when once destroyed, can never be supplied.”

This says it all!