The Dera Sacha Sauda is once again in the news. Its followers vote as a collective. In February 2007, Punjab assembly election the Dera supported the Congress. Now, the Akalis are desperate to snatch the Dera votes. Radical Sikh organizations are gun 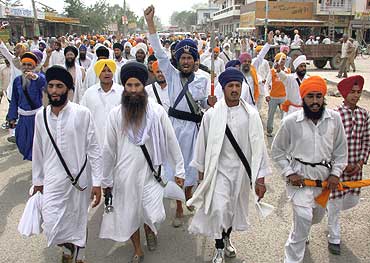 Dera politics has reared its ugly head in Punjab during this Lok Sabha election, a development fraught with dangerous consequences for this border state with a violent past. Radical Sikh organizations in the state have given a call to send suicide squads to eliminate Baba Gurmeet Ram Rahim, the controversial head of the formidable Dera Sacha Sauda, based in Sirsa in Haryana, even as the state police has cracked down on leaders of these organizations and arrested their leaders and cadres in large numbers. Though radical Sikhs led by the Khalsa Action Committee (KAC) and ruling Shiromani Akali Dal (SAD) have been at loggerheads with the Dera followers since the Dera conflagration in 2007 (when the Dera head enraged conservative Sikhs by allegedly aping the 10th Sikh Guru), the provocation for the current situation is pure politics.

From his ‘Dera’ in Sirsa, Gurmeet Ram Rahim with his 2 crore followers, spread across Punjab, Haryana and Rajasthan, has emerged as a powerful political force, and is openly playing politics through its Political Affairs Wing (PAW). The Dera’s PAW has spent the last one month organizing meetings of Dera followers in all 122 blocks of Punjab. The aim is to unite the followers to vote en masse for one party and not allow their votes to be distributed. As Aditya Insaan, the Dera’s secretary puts it, "Our only direction to the followers through the PAW, is that their vote should be collective and in the larger interest of the Dera. The PAW was formed to address the legitimate social needs of our followers since we were facing persecution from Sikhs in Punjab. All political parties exploit religion for their ends, and we need to use our strength to protect our larger interests."

So, in February 2007, Punjab assembly election the Dera supported the Congress which led to the stunning defeat of SAD in its traditional stronghold of Malwa in Punjab, losing 2/3rd of the seats. Though the Congress lost the assembly election, it decimated the Akalis in Malwa which also holds the crucial Bhatinda parliamentary constituency. The Akalis led by Sukhbir Badal hit back by launching violent action against Dera followers, disrupting their prayer sessions, booking them in false police cases and beating them up whenever possible.

The Akal Takht (supreme temporal seat of Sikhs) also issued an edict in May 2007, calling upon all Sikhs to eliminate the presence of Dera Sacha Sauda from Punjab. Radical Sikh organizations, desperate for a cause, adopted the campaign, and launched several mobilization marches in the countryside. A Dera follower became anathema to Sikhs in the south eastern part of the state. Result: Dera activities in Punjab virtually came to standstill in the last one and a half year, and most of their smaller branches in the Punjab hinterland were forced to shut down. At least four Dera followers also committed suicide in protest against the atrocities during this period.

But this time the Akalis are desperate to snatch the Dera votes (estimated to be about 40 lakh in Punjab) from the Congress. So, in the last three months or so, the ruling Akalis have softened towards the Dera followers, allowing them to open their branches in Punjab and carry on with their worship. Sources also hint at a secret understanding between the SAD and the Dera head, according to which the Dera followers vote en masse for the Akalis in return for the freedom to worship in Punjab as before. This explains the urgency of the PAW meetings, because Dera followers have not forgotten the Akali inflicted atrocities on them, and are reluctant to vote for their former tormenters.

Quite predictably, the new bonhomie between the Akalis and the Dera has enraged the radical Sikh organizations which are hell bent on implementing the Akal Takht edict of May 2007, and "exposing the Akalis’ double speak." Daljit Singh Bittu, a former militant and head of Akali Dal (panch pradhani) told Outlook, "The SAD which claims to be a ‘panthic’ party has sold the interests of Sikhs for political ends. We will tail all Akali candidates during the election campaign and videograph their speeches in which they will ask for the votes of Dera followers."

Acting at the behest of the SAD, the Akal Takht Jathedar Giani Gurbachan Singh too issued an appeal to the radical Sikhs to put of their campaign till after Baisakhi on April 13th, as the Akal takht will attend to the matter on its own. The Dera has considerable influence in the three Lok Sabha constituencies of Bhatinda, Sangrur and Patiala in Punjab, Sirsa in Haryana and Ganganagar in Rajasthan.

Even as the ruling Akali Dal grapples with the problem of keeping the radical elements in check, and preventing the law and order situation from taking a turn for the worse, the Dera’s PAW, too is also facing some opposition from its followers at the sudden change of stance in favour of Akalis. Not many are prepared to forget the atrocities allegedly heaped upon them by the Akali regime till just a few months ago. ‘Naam Charcha’ a form of worship, popularized by the Sirsa Dera, which its followers hold in their homes, virtually came to a standstill in Punjab, as blood thirsty Sikhs led by the Akalis and other organizations like the KAC and the Sant Samaj, launched an organized campaign against the ritual. All this in the name of implementing the Akal Takht edict. The PAW’s current exertions are therefore to convince its followers to move away from the Congress and vote en masse for the Akalis, so that they are able to resume ‘naam charcha’ once again. The coming days will tell how successful they are. For the moment battle-lines are drawn once again.