He started with Shankersinh Vaghela in 1997, then the chief of the Rashtriya Janata Party he had formed after staging a revolt in the BJP, continued with Keshubhai Patel and now it is the turn of Narendra Modi. 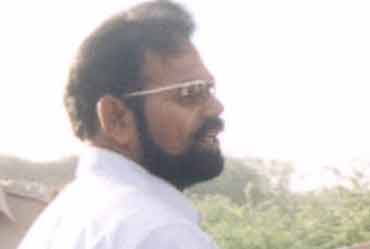 Like the Narmada waters in Gujarat, this man transcends political boundaries. In one way or the other, he has helped three Chief Ministers and their political parties and while he has been rewarded in the first two cases, it remains to be seen what the reward this time around is.

He started with Shankersinh Vaghela in 1997, then the chief of the Rashtriya Janata Party he had formed after staging a revolt in the BJP, continued with Keshubhai Patel and now it is the turn of  Narendra Modi.

Meet the BJP MLA from Waghodia in Vadodara, Madhubhai Babubhai Shrivastav (commonly known as Madhu Srivastav), who has been credited with "protecting witnesses" from anti-social elements, and keeping them away from media, encouraging them to tell the "truth" (read: getting them to turn hostile')  in the sensational Best Bakery incident where 14 people were burnt alive in the post-Godhra violence.

Tall, dark, tough, large moustaches pointing up over a full beard, gold rings in all his fingers and a thick gold chain shining through a thick bush of chest-hair, dressed in white from top to bottom, he could pass off as a quintessential caricature depicted in Hindi films: of a 'Bhai'-turned-politician.

Madhu Srivastav was a well-known bootlegger and anti-social in Vadodara and later developed interests in real estate, which in simpler terms could be called land-grabbing. He was arrested under Prevention of Anti-Social Activities (PASA) Act for his involvement in communal riots in 1985, where he was charged with inspiring a shoot-out on local goon-cum-municipal corporator Shailesh Sotta which the police could not prove.

Srivastav was elected as an Independent legislator from Waghodia constituency in 1995, and later helped Shankersinh Vaghela in unseating the Suresh Mehta Government. He had played a crucial role in the unsavoury proceedings in the violence-rocked Assembly that ultimately led to the fall of Chief Minister Suresh Mehta, who had replaced Keshubhai Patel as a compromise candidate. Srivastav informally headed a group of 10 Independent MLAs and helped rebels re-group under the Vaghela-led RJP and form government.

This is one help he did to Vaghela for which he got rewarded.

The Vaghela regime had agreed to release 14,267 square metres of prime land worth over Rs.20 crore belonging to the government's Vaccine Institute on the posh Old Padra Road. The land had been acquired from farmers a couple of decades ago under the Urban Land Ceiling Act for the Vaccine Institute. The government agreed to sell the land back to the farmers, whose power of attorney was held by a close associate of Madhu Srivastav.

But the government could not implement this decision because of a public interest litigation filed in the Gujarat High Court by senior BJP leader Nalin Bhatt, then the chairman of the Gujarat Electricity Board. While this litigation was pending, the Congress pulled down the Vaghela government and later fresh elections were ordered in 1998. Just before the elections, the same Srivastav was admitted into the BJP and given a ticket from Waghodia, and this was done basically to use his influence for the party's Lok Sabha candidate.

The same BJP, which had filed a public interest litigation against release of the land tacitly in favour of Srivastav, withdrew the petition. A deal seemed to have been struck. The BJP Government was to release that land after it came to power in 1998. In brief, the process to release a piece of land for Srivastav was started by Vaghela in return for the fall of a BJP Government, and furthered again by a BJP Government led by Keshubhai Patel.

A decision challenged by the BJP in the highest court of the State was ratified by its own government. (It is another matter that the land has still not been passed on, thanks to the hue and cry raised by former minister Jaspal Singh, also from Vadodara, that time.) It speaks for the man's clout, which, it is obvious, goes much beyond winning one Lok Sabha seat and one Assembly seat for the BJP in Vadodara.

The Best Bakery is an important off-shoot of the BJP keeping Srivastav in good humour, or perhaps the other way around. Inside accounts say that with the land deal not having come through so far, nor his name considered for ministership or even a board or corporation chairmanship, his endeavours on behalf of the accused - and the witnesses -  in the Best Bakery case are targeted to curry favour with the Chief Minister.

Watch this space for what the party with a difference rewards him with.