The Charade Over Hafiz Saeed

The high-profile campaign through the media against Sayeed seems to be proving counter-productive. It is being exploited by his lawyers to contend that the Indian pressure-- and not legal evidence-- is making the Pakistan govt. act against him. 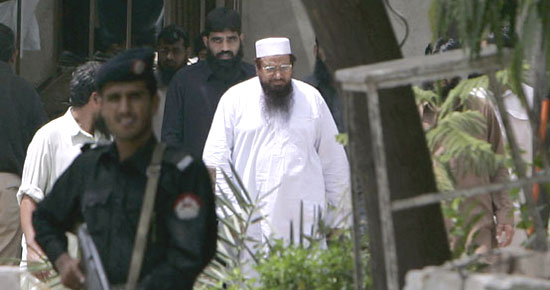 One should not be surprised by the Lahore High Court's dismissal on October 12, 2009, of the two cases under the Anti-Terrorism Act registered against Hafeez Mohammed Sayeed, the Amir of the Jamaat-ud-Dawa (JUD), the political wing of the Lashkar-e-Toiba (LET ), by the Faislabad Police in the Pakistani province of Punjab. The cases were registered following two inflammatory speeches delivered by him glorifying jihad and for collecting funds for a supposedly banned terrorist organisation. His speeches were interpreted as amounting to incitement to terrorism.

The dismissal of the cases was ordered by the Lahore High Court after it was admitted by the prosecution that the JUD was not a banned organisation. While there is a notified ban on the LET as a terrorist organisation since January 2002, there is no notified ban on the JUD. Sayeed and his aides have been maintaining since the JUD was formed after the January 2002 ban on the LET that the JUD had nothing to do with the LET. This argument has not been successfully challenged in any Pakistani court.

Ever since the Mumbai terrorist attack of November 2008, Pakistani authorities have been repeatedly saying that whatever action they took or sought to take against Sayeed and the JUD such as arresting some of their cadres, seizing their funds etc was in pursuance of the decision of the anti-terrorism sanctions committee of the UN Security Council calling for action against the JUD and Sayeed and not based on their own evidence.

The lawyers for Sayeed have been repeatedly arguing before different courts--with some success-- that no action can be taken against Sayeed and the JUD purely on the basis of a resolution of the UN Committee without any independent evidence supporting such action collected by the Pakistani investigation agencies. The Pakistani authorities have shown no interest in collecting such evidence.

Two actions by the Pakistani authorities are required in the wake of the involvement of the LET in the Mumbai terrorist attack. The first is action against the JUD and Hafeez for orchestrating the attack as has come out during the investigation by the Mumbai Police. The second is prosecution of those members of the LET in Pakistan involved in planning the attack and having it carried out.

A careful reading of the observations by judges of different courts--even by Chief Justice Iftikhar Mohammad Chaudhury of the Pakistan Supreme Court-- before which the lawyers of Sayeed had challenged on different occasions the action sought to be taken against Sayeed clearly shows that there is considerable judicial sympathy for Sayeed --if not for the JUD. These observations have mainly related to two points. Firstly, that the action against him is being taken purely on the basis of a resolution of the UN committee, which has no relevance for the judicial proceedings against him. Secondly, that the action was also under Indian pressure.

Instead of reacting to the goings-on in Pakistani courts on a day-to-day basis through the media, the government of India should carefully examine the various observations made by the Pakistani courts, decide how to counter them and then pressure Pakistan in a low-profile manner instead of through the media to pursue the cases against him. The high-profile campaign through the media against Sayeed seems to be proving counter-productive. It is being exploited by his lawyers to contend that the Indian pressure-- and not legal evidence-- is making the Pakistan govt. act against him.