Since 1947, Jinnah has been cast as little more than a malevolent bogeyman who was determined to destroy the unity of India. Advani, being a bogeyman himself, knew that he was risking trouble when he returned to his birthplace to make conciliatory re 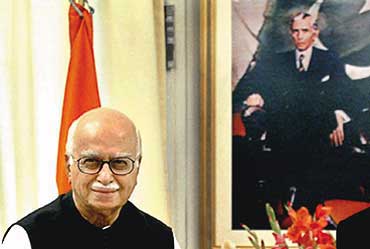 Mr Advani, I know the feeling. Say that Mohammad Ali Jinnah was a secularist and you get your head bitten off. Whether or not it is true is irrelevant. Say that Jinnah's conception of Pakistan and the way the country has turned out are at odds, and the same thing happens. Say that Pakistan was intended as a homeland for Indian Muslims and not as a theocratic Islamic state and people get angry. When extracts from Liberty or Death appeared in Outlook in 1997 under the headline 'Jinnah's Secularism and Gandhi's Fads', letter-writers of India went mad. I was found to be "blatantly biased", "Pak-sponsored" and "a shallow-minded attention-monging [sic] idiot". My favourite letter came from a Mr P. Govindrajan of Bangalore who deduced on the basis of the extracts he had read that, "The book, by all standards, is trash."

Was Jinnah secular? Sort of. He used communal antagonism as a political bargaining tool in the Forties, and he failed to foresee the bloodshed and migration that might follow from it. But his essential nature was secular. He was a nationalist and a constitutionalist; he ate pork, drank alcohol and played the stock market. Motilal Nehru famously said he was "showing the way to Hindu-Muslim unity". As late as 1946, Jinnah was willing to accept an undivided India, and his founding vision of Pakistan –- quoted by L.K. Advani in his recent speech in Karachi –- as a land where "you may belong to any religion or caste or creed" was exemplary.

Jinnah's demand for a separate Muslim State was provoked by the failure of the Congress to accommodate the reasonable demands of India's Muslim community in the Thirties, and by its misjudgments during the negotiations leading up to 1947. Since Independence, dodgy history has flourished, and Jinnah has been cast as little more than a malevolent bogeyman who was determined to destroy the unity of India.

Advani, being a bogeyman himself, knew that he was risking trouble when he returned to his birthplace to make conciliatory remarks. His comments provoked Praveen Togadia of the VHP to stand up on his hind legs and proclaim, "Jinnah was a traitor, is a traitor and will remain a traitor and a person glorifying him is also a traitor". Inevitably, a spokesman for the Congress followed a similar script.

What had Advani done though? First he went to the Quaid-i-Azam Mausoleum in Karachi (a curious shrine to Jinnah where his golf clubs, monogrammed silk handkerchiefs, dandyish Hanover Square suits and even his Cadillac are on display) and wrote in the visitor's book that Mohammad Ali Jinnah was one of those rare individuals "who actually create history". This is no more than a statement of fact: Jinnah redrew the map of the world and created what was at the time the fifth largest nation State on Earth.

Advani compounded his crime by going on to make a thoughtful speech in which he quoted Jinnah's founding ideal for Pakistan and said that while Partition could not be undone, some of the follies of Partition could be. He said, "I dream of the day when divided hearts can be united; when divided families can be reunited; when pilgrims from one country -- Hindus, Muslims, Sikhs -- can freely go to holy sites located in the other country, and when people can travel and trade freely, while continuing to remain proud and loyal citizens of their respective countries."

For his enemies, of whom there are many, nothing that Advani says about waging peace in Pakistan will alter their image of him as a mosque-smasher. He is, however, a shrewd politician with a long memory. When I interviewed him some months ago, I was struck by the range and quality of the history books lining his shelves: Martin Gilbert's Never Despair, Arnold Toynbee's A Study of History. His remarks in Pakistan look like a calculated attempt to reposition himself and the BJP, and for good reason.

Advani knows that the killings in Gujarat in 2002 did incalculable damage to the party's international reputation, and that the Modi-fied version of Hindutva is electorally a busted flush. If the BJP and its allies are to return to government, they have to do more than wave sabres and saffron flags. The Sangh parivar alone can never deliver enough votes. Whether the destruction of the Babri Masjid was really the saddest or the happiest day of Advani's life is of passing relevance.

Behind this manoeuvring lies the running debate about what India is, or should be. Sanjay Subrahmanyam recently pointed out that the term 'secularism' "has become almost as Indian a word as 'preponed' or 'denting' (for removing a dent in a car)". In most countries, the issue of 'secularism' is rarely discussed. In India, it means little because its meaning varies depending on who is using it. The word has become a term of abuse and a badge of honour. 'Fascists' denounce 'secularists' as 'pseudo-secularists,' and nobody is much the wiser.

Is a 'communal' political party being 'secular' when it pays a minority leader to deliver votes at an election? Is it secular to let Muslim men divorce their wives with the triple talaq when this is outlawed in most Islamic countries as outmoded, and even regarded as contrary to the teaching of the Quran? Is Atal Bihari Vajpayee more secular than Advani? Are proponents of secularism cleverer than everyone else?

Amartya Sen, writing in 1993 and sounding like an India Office official of a century earlier, deduced that the destruction in Ayodhya was caused by "the extreme gullibility of the uneducated". In short, the Hindu masses of UP were too stupid: "While illiteracy may not be a central feature of communal fascism or of sectarian nationalism in general, its role in sustaining militant obscurantism can be very strong indeed."

Jinnah believed in a Pakistan which was secular in a post-religious sense. He offered, ironically, a vision of modernity that was more realistic in the Forties than it is today, in this age of developing religious nationalism. "You will find that in course of time Hindus will cease to be Hindus and Muslims would cease to be Muslims, not in the religious sense, because that is the personal faith of each individual, but in the political sense as citizens of the State," he said.

Whether Jinnah's vision can be realised in the short term is doubtful, but it would do both Indians and Pakistanis no harm to look again at what he was proposing for his country.

Patrick French is the author of Liberty or Death: India's Journey to Independence and Division (Flamingo). This piece first appeared in the Hindustan Times under the headline, 'Jinnah and his secularism'.