There are enough existing promises made by their predecessors that would help the two leaders overcome the obstacles in the path to peace. 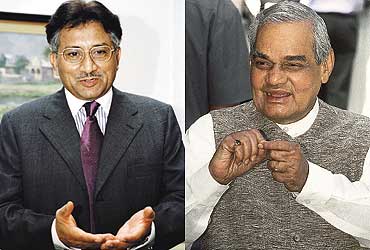 In Agra, the Pakistan President, Gen. Pervez Musharraf, and the Indian Prime Minister, Mr. Atal Behari Vajpayee, can agree on many issues that would build mutual trust, which is much-needed given the dismal relationship between the two countries. They need only keep the promises they and their predecessors have made. If implemented and built upon in good faith, these earlier commitments could help greatly in overcoming the obstacles on the path to peace.

The natural place to start is the February 1999 Lahore summit. The Lahore Declaration by the Prime Ministers, Mr. Nawaz Sharif and Mr. Vajpayee, recognised the grave dangers created by the nuclear weapons of both countries and the importance of avoiding conflict which could spiral into war and possibly nuclear war.

The gravity of the issue was clear from that fact that five out of the eight points under the Memorandum of Understanding signed by the Foreign Secretaries, Mr. K. Raghunath and Mr. Shamshad Ahmad, during the Lahore visit dealt with nuclear weapons related questions. The two sides agreed to try to reduce the risk of accidental or unauthorised use of nuclear weapons. They have done nothing about this since. What we need now are specific treaties.

India and Pakistan have not yet deployed the nuclear weapons they tested in 1998. Deployment would mean that the warning time for nuclear attack would be reduced to the few minutes it would take for the short and intermediate range ballistic missiles they have to reach the other side. Aircraft would take only a little longer to deliver a nuclear weapon from a base in one country to the capital of the other.

Deployment also increases the risk of a catastrophic accident involving an aircraft or missile carrying a nuclear weapon. It is in the interest of both countries to formally agree to keep their nuclear weapons undeployed, for example by keeping the bombs away from aircraft or missiles, by a distance greater than about 50 km. This will ensure sufficient time for mutual consultation to avoid any hasty or jittery response.

Even under an agreement to not deploy nuclear weapons, there is still a risk of accidents or unauthorised use of nuclear weapons. There are reports of at least 230 nuclear weapons accidents involving the U.S., the USSR, and the U.K. between 1950 and 1980, with many more near misses.

The two countries should agree to immediately notify each other in the event of an accidental, unauthorised or any other unexplained incident involving a possible detonation of one of their nuclear weapons so as to reduce the possibility of misinterpretation by the other country. This could be done if both countries set up Nuclear Risk Reduction Centres with direct, high- speed communication links between them.

Regular meetings between representatives of these two centres could take place and the training of staff jointly and co-operatively carried out. Just setting up such a centre with joint training on how to manage nuclear emergencies would be a significant confidence building measure.

At Lahore, India and Pakistan agreed to keep each other informed of any ballistic missile flight tests and to work towards a treaty formalising this. Since then, they have notified each other of their missile launches but not made any progress on a treaty. They should do so urgently.

There is a simple model available in the 1988 Ballistic Missile Launch Notification Agreement between the United States and Soviet Union. Due to the possibility of a misinterpretation, especially given their limited surveillance capabilities, India and Pakistan could go beyond the old super power agreement and usefully add a requirement to provide information on space launches.

Since the 1998 nuclear tests, the two countries have maintained unilateral moratoria on further nuclear tests. Both leaders have also committed in various ways to signing the Comprehensive Nuclear Test Ban Treaty. They should come out from the pretence of the need for a "national consensus''; this constraint has never been applied to any other policy.

In Agra, the two leaders should agree formally to the CTBT. We have already had too many nuclear tests - even a single test was one too many. The two countries should show that they have no intention to ever resume testing by closing down their test sites, banning subcritical and hydrodynamic tests and research into new kinds of nuclear weapons.

The Lahore declaration also stresses the need for the resolution of all outstanding issues to ensure an environment of peace and security. High on the priority list should be a resolution of the Jammu and Kashmir question, in accordance with the wishes of the local people.

As a first step, India and Pakistan can agree to withdraw their military forces from Siachen Glacier and declare it a de-militarised zone. They almost managed this in November 1992, when an agreement on Siachen was said to have been reached that envisaged "mutual withdrawal of troops from new positions, the creation of a ``zone of complete disengagement'' and the delineation of a ``zone of peace and tranquillity''. The process broke down before a formal treaty could be agreed to.

For decades, India and Pakistan have played a game with the no- war pact. In 1949 and 1950 India offered first a no-war declaration and then a no-war pact to Pakistan, the offer was accepted by Prime Minister Liaquat Ali Khan provided there was a timetable for settling all outstanding disputes.

More recently, in 1981, General Zia offered a no-war pact to India, which was refused. Indira Gandhi subsequently declared that even without a no-war pact, India would not attack Pakistan first. Gen. Musharraf repeated the offer at the United Nations Millennium Summit in September 2000.

When India made the offer, Pakistan refused because it believed that until the Kashmir issue was resolved, a war with India could not be ruled out. When Pakistan offers, India spurns it believing it would permit Pakistan's continued support of cross-border militancy in Kashmir but forbid any possible Indian punitive incursion across the border.

A way out is for both sides to agree to never wage war against the other, and define acts that would violate this pact. For instance, a no-war pact could forbid, among other things, military incursions across the border, support for cross-border militancy, sabotage, blockades, and disruption of river waters. It could also establish an Adjudication Commission, whose ruling would be binding, for settling disputes over actions that one side may consider violations of the no-war pact.

There is mistrust among our people too, much of it the result of government propaganda over decades. To develop a new basis for living together as good neighbours, the people of India and Pakistan need to meet and get to know each other again. They must be able to travel far more freely to each other's country.

In 1982, India and Pakistan agreed to establish a Joint Commission to "strengthen understanding and to promote co-operation between the two countries for mutual benefit in economic, trade, industrial, education, health, cultural, consular, tourism, travel, information, scientific and technological fields''. Nothing came of it.

Then, in 1998, there was an Agreement on Cultural Co-operation to "encourage and facilitate exchange in the field of art, culture and mass media... to provide facilities and scholarships to students and research scholars... facilitate exchange of artists, poets writers and musicians... visits of sports teams''. Again, nothing has come of it. These agreements must be activated and implemented creatively and with determination.

But to make these work will require a lifting of the painful visa and travel restrictions that India and Pakistan impose on each other's citizens. What is needed at Agra is an agreement to open visa offices in many cities in both countries and a decision to grant visas at the port of entry for accredited journalists, teachers, students, artists and sports- persons and senior citizens.

Both countries now agree they need peace badly. We have suggested what is possible at Agra. The treaties themselves are not hard to write. It is time to take at least the first step.

(Zia Mian and M. V. Ramana are at Princeton University, U.S., A. H. Nayyar is at Quaid-i-Azam University, Pakistan, and Sandeep Pandey is with Asha, India.)

Vikas Singh To Be Handed Over Today