Left unchecked, the rise of the MMA - the latter-day Taliban - in a nuclear-armed Pakistan, which has been locked in conflict with a nuclear India over Kashmir, will have grave consequences for the region. 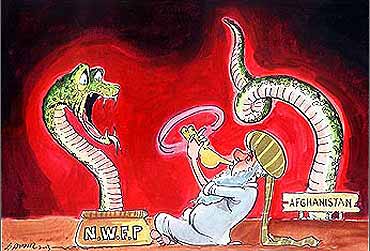 LAHORE, PAKISTAN: A year and half after American Special Forces swept away the Taliban government of Afghanistan, the group is alive and well - and spreading their ideology to new horizons - in neighboring Pakistan. The apparent survival of the Taliban - most of their senior leaders now live in Pakistan - and the persistence of their ideology point to the monumental failure of the American war on terror. The group's re-emergence as a political force also bodes ill for civil liberties in Pakistan - a key US ally - and for the prospects for democratization in other Islamic countries.

Last October, an alliance of fundamentalist Islamic parties rode on widespread anger at the American war in Afghanistan to take power in Pakistan's sensitive North West Frontier Province (NWFP), which borders Afghanistan. The alliance has since ordered compulsory prayers for the population and created a Taliban-style Department of Vice and Virtue to enforce their rules. Their broader campaign - to turn all of Pakistan into a state modeled after the Taliban - is only one of several crises that have paralyzed Pakistan and its nine-month-old civilian government. Many Pakistani politicians believe that President General Pervaiz Musharraf and the army may be on the verge of wrapping up parliament and re-imposing military rule.

In June Musharraf travels to Washington and London and is likely to ask for an endorsement from President George Bush and Prime Minister Tony Blair to curtail Pakistan's return to democracy, in return for arresting some 450 members of Al'Qaeda, agreeing to talks with India on Kashmir, and supporting US-led military action in Iraq. However, the present crisis in Pakistan is almost entirely of the army's making, as it attempts to remain the most powerful political player in Islamabad despite elections, the re-constitution of parliament, and the restoration of the Constitution.

On June 1, the six-party Alliance of Islamic parties - the Mutahidda Majlis-e-Amal (MMA) - which rules the NWFP, ordered the closure of offices, shops and schools at prayer time to allow all males to the mosque. The newly formed Department of Vice and Virtue will recruit young Islamic zealots to enforce such rulings on the streets. The MMA parties, ardent supporters of the Taliban, continue to assist and support the Taliban's guerrilla war against the US and the Afghan government forces in Afghanistan. Before the fall of the Taliban, the Department of Vice and Virtue in Afghanistan had unlimited power to harass the local population.

On June 2, the NWFP Assembly passed the Sharia, or Islamic law, bill, which will further dramatically change the province's educational, judicial and financial systems and bring them in line with fundamentalist Islamic laws. A few days earlier, when the bill was tabled in the NWFP parliament, MMA supporters went on a celebratory rampage in Peshawar, the capital of the province, tearing down advertisements showing women, destroying satellite cable TV connections, and attacking offices of foreign multinationals. The MMA has ordered schools in the NWFP to replace boy's uniform of trousers and shirts with traditional dress and to require girls to cover their heads. The police, which takes orders from Islamabad, stood by quietly, refusing to control the mobs.

Emboldened by its successes, the MMA has also declared that it will demand that the government impose Sharia law throughout the country. So far, President Musharraf has been silent." Far from criticizing the MMA or reigning in its militants, the military's intelligence agencies have worked overtime to pave the way for their forceful entry into the corridors of power,'' said an editorial in Pakistan's Friday Times, a leading liberal political weekly.

Some politicians are convinced that the army and the Inter-Services Intelligence (ISI) are allowing the mayhem to continue so that Musharraf, who is also army chief, can dismiss the parliament that he helped form nine months earlier - in a much-ballyhooed 'democratic' election - and then re-impose military rule.

The MMA came to power in the NWFP following last October's controversial elections, in which the army and ISI helped the MMA win a majority of seats in the province. The MMA also won nearly a quarter of the seats in the National Assembly. In the process, the army sidelined major secular parties including Nawaz Sharif's faction of the Pakistan Muslim League and Benazir Bhutto's Pakistan Peoples Party. Through the elections, the army brought to power in Islamabad a pro-army faction of the PML, anointing a pliant Baloch politician, Zafrullah Khan Jamali, as Prime Minister.

Since October, the Islamic groups (including the MMA) and the secular opposition who control about a third of the seats in the National Assembly, have refused to accept Musharraf's demands that he stay on as both President and army chief for the next five years. They have also refused to accept Musharraf's package of amendments to the Constitution that would give the army a permanent political role.

The army does not want to give up an iota of power and sees the present civilian government as a façade behind which it can continue to rule, fill all the plum jobs in the government, and conduct its own foreign policy. In spite of the so-called return to civilian rule, between 600 and 700 military officers still occupy key jobs in government ministries and state-owned corporations, while elements in the ISI have continued to give clandestine support to the Taliban in Afghanistan and to Kashmiri militants.

For decades, the army's natural allies have been the Islamic parties, but now the tables are turning as the Islamicists see their moment to turn Pakistan into a theocratic state. The MMA are banking on their support within the army and the intelligence services. They have gone out of their way to revile Musharraf as a stooge of the Americans, while praising the army's commitment to Islam.

In a rich irony, the Americans have in fact strengthened the army in order to fight terrorism. Since September 11, the US has pandered to the army's policies by once again forging an alliance with it, much as it did during its fight against the Soviets in Afghanistan during the Cold War. Washington sees Musharraf as holding Pakistan together and has ignored the political parties and civil society. Its endorsement of the October elections that international observer groups, including the European Union, have condemned as rigged has only helped the MMA by decimating the secular parties and institutions of civil society.

Now the Bush administration is asking Musharraf for up to 6,000 troops to be part of the peacekeeping forces in Iraq and may well try to enlist Pakistani intelligence in helping undermine the Iranian government. Washington already owes Musharraf for catching Al'Qaeda leaders, even though the army has refused to apprehend a single senior Taliban leader - most of whom live in Pakistan. All this will only give more leverage to Musharraf when he talks to the Americans.

But Washington's short-sighted policies have tended to ignore such domestic crises, choosing instead to focus on the war on terror in Afghanistan. This will only hasten Pakistan's turn towards Islamic fundamentalism as the MMA gets stronger and more strident in its demands. It will also further undermine any hopes of a return to genuine civilian control of the army and make a mockery of Washington's rhetoric about furthering democracy in the Islamic world. Left unchecked, the rise of the MMA - the latter-day Taliban - in a nuclear-armed Pakistan, which has been locked in conflict with a nuclear India over Kashmir, will have grave consequences for the region.

Ahmed Rashid is the author of

Taliban: Militant Islam, Oil and Fundamentalism in Central Asia and Jihad: The Rise of Militant Islam in Central Asia. Rights: Copyright 2003 Yale Center for the Study of Globalization where this first appeared.
For in-depth, objective and more importantly balanced journalism, Click here to subscribe to Outlook Magazine

Our Man In Nepal?