Though the inexperienced Europeans stage a fightback in the second-half, but are unable to challenge the overwhelming superiority of the Pakistanis 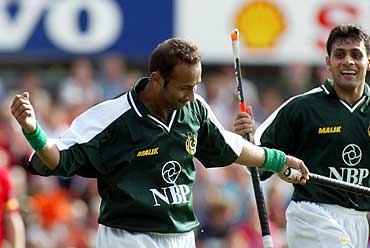 Pakistan saw off a second-half fightback by Germany to post a 5-2 win in the 25th Champions Trophy at Amstelveen today.

It was Pakistan's second victory in four matches as they maintained their unbeaten run in this six-nation event, having drawn two.

Pakistan, after taking a 3-0 lead in the first-half, turned complacent before tightening up in time to record a  fluent win.

The inexperienced Germans were bamboozled by the dazzling individual play of the Pakistanis who generated appreciable pace early on and used the wings to stretch the defence.

The Germans, forced on the defensive for much of the first-half, enjoyed a bit of freedom in the second as the Pakistanis played rather loosely.

The early Pakistani onslaughts saw Jawad sweeping home a Butt pass from a counter-attack. Then Butt got into the act when Mudassar Ali set up a goal with a long ball and a little later, Jawad completed a counter-attack by converting a pass from Sameer Hussain.

Immediately on restart, the Germans struck twice in quick succession. Sperling scored off a Kopp pass and then Kopp let fly from the top of the circle following a counter-attack that caught the Pakistani defence on the wrong foot.

However, the Pakistanis gathered themselves and drew further away in the last five minutes as Abbas converted a penalty corner and Khalid made it 5-2.

Later, holders and Olympic gold medallists Holland virtually assured themselves of a berth in the final with a hard-fought 6-3 win against Argentina.

The result took the Dutch tally to 10 points from three wins and a draw, while Argentina suffered their second defeat in four outings to remain on six. The home team have only to play the young German team in their concluding league fixture on Saturday.

The fast improving Dutch had to weather some difficult spells in the first-half when Argentina gave back as good as they received. But after overcoming the initial resistance, the Dutch proceeded to dictate terms to win quite handily.

'The Players Refuse To Learn'