Has the Sangh Parivar and the Gujarat government sought prior permission of Buddhists and Jains to make them part of Hindu religion? If not, it is nothing but a case of forced conversion. The real danger to Hindu religion is from within because of it 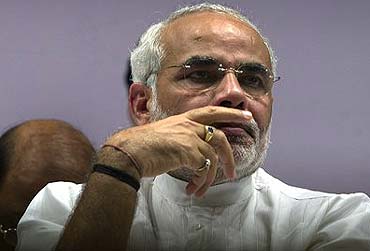 The Sangh Parivar is not able to resolve the dangers looming large on the caste-based Hindu religion on its own. There is a saying that you should first try to resolve your differences on your own, and then consult your neighbours. But instead of taking recourse to either of these options, they start finding fault with Christians or Muslims — Jains and Buddhists have now become their latest targets. .

On the 19th September, 2006, the Gujarat Assembly passed the Religious Freedom (Amendment) Bill stating that prior permission is required from the government before seeking conversion to any religion and as if this was not enough, Chief Minister Narendra Modi has done what has not been done anywhere else by declaring that Buddhists and Jains shall be treated as a part of Hinduism.

For certain limited purposes, in certain matters like marriages etc., Buddhists, Jains and Sikhs have been included in the ambit of Hindu religion in our Constitution — but in Articles 25 to 30 of Constitution, it has been explicitly stated that Buddhism, Jainism and Sikhism are three separate religions. It is very clearly stated: 'Every person in India, is equally entitled to freedom of conscience and the right to freely to profess, practice, propagate religion.' The Supreme Court and the Minorities Commission have also held the view that Sikhism, Jainism and Buddhism are distinct identities — and are not a part of Hindu religion.

It is interesting that using the same Article 25 (Clause 2) illogic (read in isolation), Sikhs too should have been covered by the Gujarat bill. But the bill doesn't do so. It has not declared Sikhs as part of Hindu religion out of cowardice. About two years back, when the RSS Sarsanghchalak, K.S Sudershan had declared in a statement that Sikhs were part of Hindu religion, the Sikhs had flared up and challenged the description, letting it be known that they were fully competent of looking after their distinct religious identity. The situation had became very volatile, and perhaps BJP is aware of the sensitivities of its Shiromani Akali Dal allies and its electoral fall-out, which is why Sikhs have been kept out this time.

But just consider how these religions came into being.

Buddhism came into existence in the backdrop of rampant social evils prevailing in the society when Lord Buddha observed that there was widespread violence, untouchability and discrimination against women. Humanity was his only concern and amelioration of the miseries of human beings his ultimate goal —and he laid down certain norms for achieving this goal. "I teach one thing and one thing only: suffering and the end of suffering" In real terms, it is not a religion but dhamma which means that human beings should do such deeds which should remove others’ miseries and bring happiness to others.

Similarly with Jain Dharma, as Lord Mahavira spoke out against the social evils and violence prevailing in the society at that time, urging the people to follow the path of truth and non-violence. Gurunanak Devji also fought against discrimination and religious dogma of those times and urged the people to follow the righteous path. All these religions came into existence on a parallel basis and not as an off-shoot of Hindu religion.

The fact is that a large majority of people in India are converting to Buddhism and Christianity because of the caste-based Hindu religion. According to my information, Buddhism is spreading very fast in our country. BJP is only trying to get political mileage by treating Buddhists and Jains as Hindus. The BJP and the Sangh Parivar somehow are worried that by 2066, Hindus in India will become a minority.

India is a secular country. Secularism simply means that the state shall not interfere in the personal and religious affairs of a person and religion would not be used as a political tool. By framing such laws as are against religious freedom, the Gujarat government has made it clear that a person shall have to take permission from the state for pursuing a religious faith of his choice.

Rajasthan, Madhya Pradesh, Chhattisgarh and now Gujarat have made laws which stipulate that whosoever wants to pursue a religious faith of his free choice shall have to get prior permission from the government. This means that the governments —and the Sangh Parivar at large — shall get prior information about anyone wanting to change their religion.

As most of such people wanting to change their religious identity would be Dalits and people belonging to other weaker sections, is it very difficult to figure out what the Sangh and BJP in these states wish to do? They wish to be forewarned so that they are fully prepared to adopt all the means to prevent such conversions — through intimidation or by coercion.

Let us take for example the case of a Dalit who does not have any farmland. There are so many ways to coerce or intimidate him via rich and powerful farmers: By not hiring him as a farmhand. By not allowing him to pass through land or dividers belonging to rich and powerful farmers. By instigating and creating dissensions among his other Dalit relations. And if these tactics do not work, why, then there is always the time-tested method of implicating him in false cases.

By creating all sorts of problems for people wanting to change their religion would in all probability dissuade such people from converting to another religion. Such persons wanting to convert to another religion may be forced even to make a statement to the effect that they wanted to do so under pressure from a Maulvi or a priest. Under such circumstances, the Sangh Parivar and their governments will also get a handle to harass and torture Muslim and Christian priests.

Atrocities in any case are already being committed in many districts including Jhabua, Jabbalpur, and Dang on Christians. Presently, Christians are doing a commendable job through the convent schools in the areas of education and health for Dalits and other backward classes — but they would be forced to restrict their activities to the elite. It is an irony that the elite and the prosperous sections of the society are taking maximum advantage of convent education being imparted by the Christian institutions, but when the same Christian community wants to do something for Dalits and other backward communities, it is termed as religious conversion.

After all, the colonising British were also Christians and the upper castes happily served them as landlords, bureaucrats and in other capacities. If Christians and Muslims (remember the upper-caste Hindus working with the Moghuls?) give some benefits to such people, then everything is fine otherwise everything is wrong.

The Sangh Parivar wants Buddhists and Jains to accept the suzerainty of the Vedas. Have the Jains agreed to accept the supremacy of the Vedas over the Tirthankaras? Have the Buddhists agreed to accept Hinduism's caste-system? The Sangh Parivar also forgets one basic fact: It was Dr. Ambedkar who gave a boost to reviving Buddhism on October 14, 1956 at Nagpur by initiating lakhs of Dalits into Buddhism along with himself:

"I embrace today the Bauddha Dhamma, discarding the Hindu religion which is detrimental to the emancipation of human beings and which believes in inequality and regards human beings other than Brahmins as low-born."

Buddhism and Dr Ambedkar are in fact two sides of the same coin. BJP will only stand to lose if they adopt such tactics, as whatever small minority of Dalits who have so far been neutral towards BJP will be vehemently opposed to them after this move. The All India Confederation of SC/ST Organizations and the All India Christian Council is holding World Religious Freedom Day on October 13-14 at Nagpur where activists will be coming not only from different parts of India but from all over the world and after this event, the struggle for religious freedom will be intensified not only within the country, but with the active cooperation of people from all over the world.

The Sangh Parivar have nothing to be afraid of Muslims or Christians who might be doing some conversions or spread of Buddhism at a fast speed. The real danger to Hindu religion is from within because of its own weaknesses. Thousands of instances have come to light when children from upper castes refused to take mid-day meals in schools along with Dalit children. Entry of Dalits to several Hindu temples is still prohibited. It is a great irony that there is not a single Dalit industrialist nor is there any Dalit heading an Import-Export House. According to a recent survey, out of 315 top journalists, there is not a single Dalit journalist. There are hundreds and thousands of celebrities in the country, but not even one of them is a Dalit. . Under these circumstances, the real danger to Hindu religion is from within and not outside. By remaining deprived within the fold of Hindu religion, what do they enjoy? Slavery, poverty, humiliation?