Novak Djokovic and Rafael Nadal were joined in the last 16 by Roger Federer, who was largely untroubled by a battling Lucas Pouille. 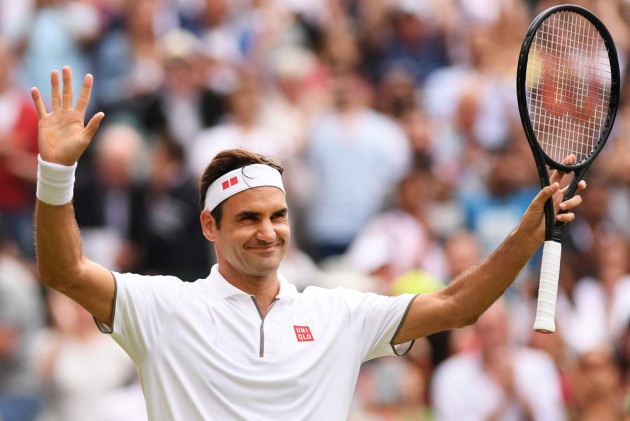 Roger Federer encountered few problems as he defeated Lucas Pouille in straight sets to reach the second week of Wimbledon.

After striking at a crucial moment to claim a tight opening set, a Federer victory rarely looked in doubt from then on.

The 37-year-old will face Matteo Berrettini in the last 16 after the Italian beat Diego Schwartzman in five sets.

Federer had to save two break points in an even first set, including one with a smash as he edged into a 6-5 lead.

Pouille had not afforded Federer a single break opportunity despite a poor first-serve percentage of 43 in the opener until he lost focus at a vital moment with a tie-break beckoning.

Some superb play at the net helped Federer to force two set points, the second of which was converted when the Frenchman sent a forehand off target.

The Swiss star asserted his dominance early in the second, a stunning forehand winner on the run sending him on the way to the first of two straight breaks and a 4-0 lead.

It’s hard to stop @rogerfederer in this kind of form…

The Swiss defeats Lucas Pouille 7-5, 6-2, 7-6(4) to notch his 350th match win at Grand Slams - the first player in history to reach the milestone#Wimbledonpic.twitter.com/A1sBL0HS5L

Pouille struck back with a break of his own, but the 27th seed's serve gave way for the third time in the set when he could not handle a forehand from his opponent at the net.

In only the second meeting between the players, former Wimbledon quarter-finalist Pouille did not cave in, taking the third set to a tie-break after saving a match point with an ace.

But an early mini-break gave Federer the tie-break advantage and, after another match point went begging, his 350th grand slam victory was sealed when his opponent's backhand found the net.