Elgar's partnership of 79 with Quinton de Kock solidified South Africa's recovery from 37-3 after Proteas' were sent in to bat. 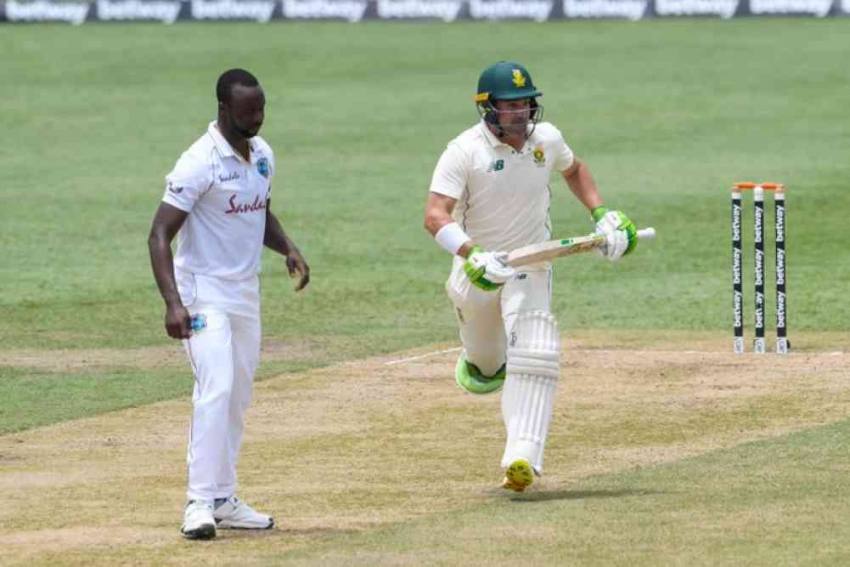 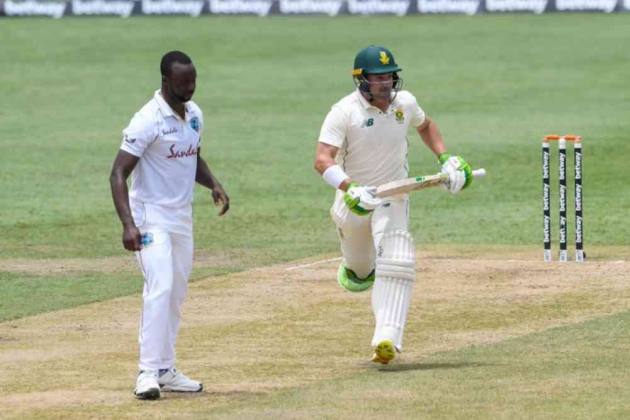 Dean Elgar showed the qualities South Africa recognized in raising him to the captaincy, making 77 to lead the Proteas' fightback against the West Indies on the first day of the second test. News | Highlights

Elgar's late partnership of 79 with Quinton de Kock, his predecessor as captain, solidified South Africa's recovery from 37-3 in a damp morning session after it was sent in to bat.

De Kock followed up his match-defining 141 not out in the first test with an unbeaten 58 which had South Africa 218-5 when stumps were drawn in bad light, just before the rain returned. Wiaan Mulder was 2 not out.

Elgar survived the torrid start to the South African innings when the ball swung and was beaten twice by Kemar Roach in the short period between the delayed start of play and a fleeting rain break.

His first scoring shot was a boundary and he went on to his first half-century as captain from 147 balls. He was bowled by Kyle Mayers who brought a ball back from outside the left-hander's off stump just before the arrival of the second new ball.

De Kock brought up his 22nd test half-century from 89 balls in an assertive innings which helped break the early domination of the West Indies fast bowlers.

Shannon Gabriel earlier took two early wickets on his return to the West Indies to put South Africa under pressure. The veteran fast bowler struck in his first over — the second of the day — and again to break a crucial partnership just before tea to leave the Proteas 125-4 heading to the final session.

West Indies won the toss and opted to bowl in St. Lucia as it looks to draw the series. The home team lost the first test by an innings but used damp early morning conditions to its advantage.

Elgar put on an 87-run stand with Kyle Verreynne (27) but Gabriel ended that just before the tea break when Verreynne was caught down the leg side and failed with a review.

Gabriel, who missed the first test, ended the day with 2-47 and fellow pacers Kemar Roach, Jayden Seales and Mayers had one wicket each, although the West Indies bowlers had to work hard in the second and third sessions as the skies cleared.

They were dominant in the first session as Aiden Markram (0), Keegan Petersen (7) and Rassie van der Dussen (4) all departed for the Proteas, with the ball swinging and seaming around.

Rain delayed the toss and also caused a short delay during that first session at Daren Sammy National Cricket Stadium.

Markram flashed at a wide delivery from Gabriel to be caught at backward point, Petersen edged to the slips off Seales, and Van der Dussen left a delivery from Roach which jagged back and into his stumps.

West Indies made two changes after the first test loss, with Gabriel and Kieran Powell in for Rahkeem Cornwall and Nkrumah Bonner. Gabriel immediately boosted the home team's pace attack, while batsman Powell had already replaced Bonner in the first test as a concussion substitute.

Cricket West Indies said a small number of fans would be allowed into the stadium for this test, although they had to be fully vaccinated to attend. A maximum of 400 spectators per day would be allowed, CWI said, the first fans to attend an international cricket game in the Caribbean since the start of the coronavirus pandemic.

The tickets will be free but fans must present vaccination documents to gain entry. The stands were still largely empty around the ground. (AP)

Milkha Singh To Be Cremated With Full State Honours