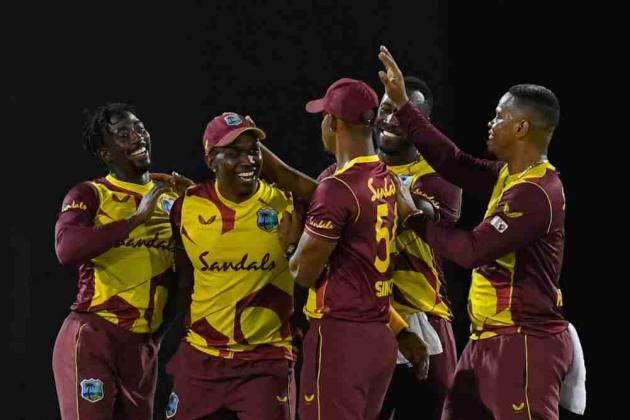 The West Indies took advantage of a sensational late batting collapse by Australia to beat the visitors by 18 runs in the first of five Twenty20 matches on Friday. (More Cricket News)

The home side scored 145-6 after being sent in to bat, with No. 6 batsman Andre Russell scoring 51 runs off 28 balls and opener Lendl Simmons adding 27.

Australia was cruising to expected victory at 70-3 when it lost six wickets for 19 runs and was all out for 127 in 16 overs. Obed McCoy took 4-26 and Hayden Walsh added 3-23 for the West Indies.

Mitch Marsh top-scored with 51 runs and took two wickets and teammate Josh Hazlewood had 3-12. Opener Matthew Wade got Australia off to a strong start with 33 runs from 14 balls, but it was wasted after the late collapse.

“The Australian men's cricket team stands with the West Indies cricket team in condemning racial injustice and discrimination, both at home in Australia, and throughout the world,” the statement said.

“We kneel alongside our West Indian friends to recognize and show our support of all those who have been victims of racial injustice and/or discrimination, past and present.”

West Indies skipper Kieron Pollard was a late injury scratch, handing the captaincy to Nicholas Pooran for the first time.

McCoy was named man of the match.

“I've been working really hard . . . it was just all about execution and sticking to the team plan,” McCoy said. “Normally on that surface the ball has nice bounce and carry, but I was just trying to mix up my pace as much as I can. We were confident and knew we had the bowling to back it.”

Australia captain was brutally honest in his assessment of his side's late capitulation.

"Anytime you lose six for 19, you're gonna struggle to win a T20 game,” Finch said. “So we just needed somebody to take it upon themselves and get right through to the end.

“After the position that Marsh and Wade got us into, just a bit of game smarts would have got us over the line there but (we) sort of panicked a little bit. There's no excuses for our batting display there. You've got to dust yourselves off and come again with the same attitude but just execute a little bit better under pressure.”

The second match is scheduled for Saturday at the same stadium in Gros Islet.