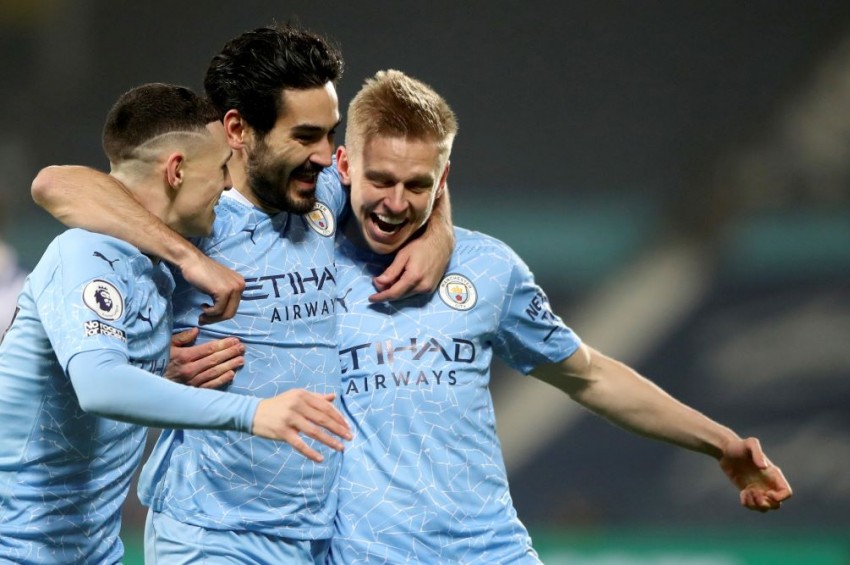 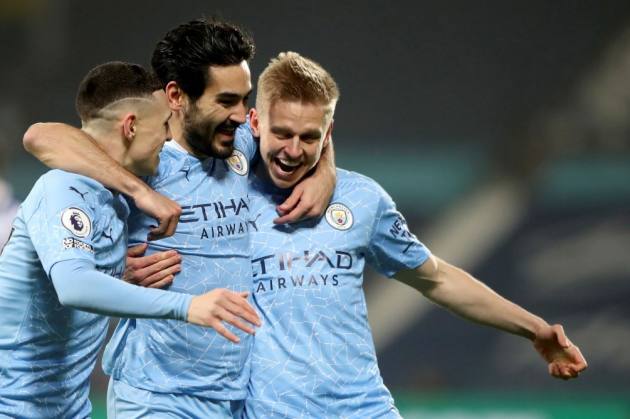 Ilkay Gundogan scored twice as Manchester City moved to the top of the Premier League for the first time this season with an outstanding 5-0 victory at West Brom. (More Football News)

Pep Guardiola's side stretched their winning run to 11 straight matches in all competitions on Tuesday, a sequence that has again seen City emerge at the forefront of the title picture after a rocky start to the campaign.

West Brom, then under Slaven Bilic, had been the last team to stop City winning when these sides met in mid-December, but Sam Allardyce's men were completely outclassed at The Hawthorns despite the absence of Kevin De Bruyne, the injured PFA Players' Player of the Year winner.

Joao Cancelo's first Premier League goal separated a first-half Gundogan double, which Riyad Mahrez and stand-in captain Raheem Sterling added to either side of the break.

1 - Joao Cancelo has both scored and assisted in a single game in the top five European Leagues for the first time since April 2016 for Valencia vs Eibar in LaLiga. Reviewed. pic .twitter.com/cBFTHHOGkV

West Brom's best spell came in the opening two minutes as City were penned in under an aerial barrage before countering through Phil Foden, whose low deflected shot was touched onto the post by Sam Johnstone.

Johnstone was helpless from City's next attempt, watching the ball nestle in the bottom-left corner after Gundogan controlled Cancelo's long pass and finished expertly.

The goalkeeper was then left awfully exposed for the second as West Brom defenders appeared to stop playing when Bernardo Silva was flagged offside. Cancelo had time and space to pick out the top-left corner with a gorgeous finish and the offside decision was overturned following a VAR review, meaning the goal stood.

Gundogan pinched the ball from Romaine Sawyers and slid a left-footed effort beyond Johnstone before the half-hour mark, and it was 4-0 heading into half-time as Mahrez moved inside from the right and lashed past the keeper.

The same pattern of play continued following the restart and, although Rodri's blast clipped the crossbar, City only had to wait until the 57th minute for Sterling to turn in Mahrez's first-time cross, finally then easing up slightly to spare their struggling hosts further punishment.

What does it mean? City on top in epic title tussle

In leapfrogging rivals Manchester United, who play Sheffield United on Wednesday but will grant City a game in hand, Guardiola's men became the ninth team to lead the table at the end of a day this season.

If City can maintain this high standard, though, the run-in might be a little more predictable. Even without De Bruyne, the four-time Premier League winners look back to their very best.

City will surely miss De Bruyne as he faces up to six weeks out, but they have now won both of their league matches without their talisman this season, scoring six and conceding none.

His absence on Tuesday allowed those stars who have made up the supporting cast in recent weeks to come to the fore, including Gundogan.

The Germany midfielder now has seven league goals this term - the first of which came in the previous West Brom clash, kickstarting a superb spell - to make this his best ever scoring season.

Neither the officials nor the West Brom defenders came out of City's second goal well.

Sian Massey-Ellis correctly initially kept her flag down despite believing Silva was offside but then inexplicably indicated for the decision when City were still on the attack inside the area.

But the whistle did not blow until the ball hit the net and there was little excuse for West Brom's static defending, their porous back line now having conceded 29 home goals - more than any other team in Europe's 'top five' leagues - after the five here.

- West Brom have lost five Premier League home games in a row for the first time since December 2004 (another run of five).
- West Brom have conceded 22 goals in their last five Premier League games on home soil, the most a team has shipped across five top-flight home games since Aston Villa in December 1935 (also 22).
- City have won seven consecutive top-flight games for the first time since August 2019.
- Allardyce is the first manager since Chris Ramsey at QPR in March 2015 to lose his first four home Premier League games in charge of a club.
- Phil Foden made his 100th appearance for City in all competitions, scoring 24 and assisting 17 since his debut for the club in November 2017.
- Cancelo scored and assisted in a single game in the big five European leagues for the first time since April 2016 for Valencia against Eibar in LaLiga.
- Mahrez has been directly involved in nine goals in eight Premier League games against West Brom (5 goals, 4 assists) - only against Watford (10) has he registered more goal involvements in the competition.

City will hope to run up another handsome total at home to basement side Sheffield United on Saturday. West Brom have a huge clash with Fulham, where they will aim to end a five-game losing run at home.